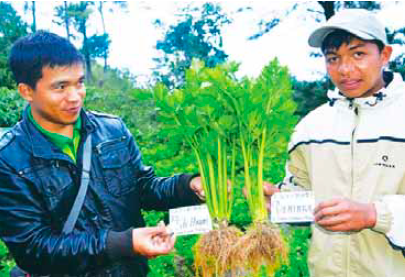 At Benguet’s La Trinidad Vegetable Trading Center, celery is said to comprise 10 percent of all the veggies handled by the facility.

Celery, the strong-smelling herb of the family Apiaceae to which carrrots and parsley also belong, is an old crop that originated in the British Isles, the Mediterranean areas, and the Middle East. The plant, whose ancient forms resembled its wild species, grows from 30 to 60 centimeters in height. The ancient Greeks, Romans, and Chinese cultivated it for its medicinal qualities.

The use of celery as a food crop was first recorded in 1623. In the late 1700s, European plant breeders developed the first celery varieties with large, fleshy, succulent, upright leaf stalks or petioles that no longer had the stringiness that characterized the old cultivars. The plant grew in importance and popularity, usually eaten cooked as a vegetable or as a delicate flavoring in a variety of stocks, casseroles, and soups, or served in salads and appetizers with spreads or dips.

In the Philippines, celery ranks next to lettuce as a salad crop, as salads have become increasingly common on the menus of many Filipinos. Celery has become an important crop in the last two decades. Thus there is a growing demand for the herb, with the notable provinces producing stalk celery said to be Benguet and, to some extent, Nueva Vizcaya and Davao, as the crop grows best in a cool, humid, and long growing season with an ample and uniform moisture supply. At Benguet’s La Trinidad Vegetable Trading Center, celery is said to comprise 10 percent of all the veggies handled by the facility. The bulk of harvests of the herb come from the celery growing areas in the towns of Buguias and Mankayan, where the elevation and clay-loam soil are highly suitable for the crop’s culture.

According to Dr. Charles Cheng—who received Baguio City’s Outstanding Citizen Award for descendants of early Chinese settlers in Benguet in 2009—migrants started what gave rise to the province’s semi-temperate vegetable farming. When the Americans built Camp John Hay in Baguio City in the early 1900s as a rest-and-recreation area for their soldiers, said Cheng, the Chinese capitalized on the Americans’ love for green salads and grew lettuce, celery, and other now-popular vegetables, turning areas with plenty of water into veggie gardens that eventually earned for Benguet the title of “Salad Bowl of the Philippines.” The settlers also introduced organic fertilizer like pounded empty soybean pods for producing tasty vegetables.

In the 1950s, two Chinese agriculturists built vegetable terraces along the mountain trails that reached up to Buguias, finding ways to draw water from rivers to irrigate the gardens. Chinese farmer Rubustiano Choy became known as the “Potato King” while a certain Mayor Yap of Buguias was named “Celery and Wombok King.”

Many horticulturists say that celery is a demanding vegetable to grow. Market analysts also note that lettuce and celery, in addition to their harvests being highly perishable, are the crops that Buguias farmers find to be the most risky to grow because of their pronounced price swings. But when prices are good, growers can also reap huge rewards in terms of remuneration for their crops. Staggering their plantings is a way farmers avoid erratic market prices.

The Buguias and Mankayan farmers plant celery year-round but get their quality harvests from their January-to-April plantings. The most common cultivar that they have been planting is the Condor Ventura variety marketed by Allied Botanical Corporation (ABC), which has introduced a new hybrid celery, Stetham F1, from its supplier, the Dutch firm Rijk Zwaan. The variety produces long, green apple-colored stems that grow very uprightly and weigh from 600 to 900 grams per plant. It has fragrant dark green leaves with no side shoots. Its stems are darker colored than those of Condor Ventura.

Condor Ventura is an early and high yielding ‘Tall Utah type’ celery bred for its massive size. Its petioles are long and glossy bright green, resulting in highly attractive bunches. Ventura has
been very popular among growers in the Cordilleras because of its uniformity and good yield.

Nuebe Paulino of Sitio Antopak in Buguias town’s Barangay Boyacaoan and Remundo Guiad of Sitio Dowag in Brgy. Guinaoang, Mankayan—who have been celery growers for many years and can thus consider themselves as having mastered the crop’s culture—were among the first to try planting Stetham F1. Paulino planted it on 500 square meters (sq. m.) and Guiad on 200 sq. m. of his 1,000 sq. m. celery field. To see how the new variety performed compared to Condor Ventura, they continued to devote parts of their fields to their old cultivar.

The two farmers first soaked the celery seeds in water overnight to induce their quick germination before sowing in seedbeds near their sources of water. Both farmers staggered sowing so they could also stagger harvests of the crop for regularly supplying their buyers all throughout the year.

As celery seeds are slow to germinate, the farmers constantly maintained soil moisture in their seedbeds. They covered the beds with wet sacks to prevent the seeds sown thinly at a shallow depth from being washed out during watering, and to conserve soil moisture in the beds.

Celery seedlings take from two to three months to reach a suitable size for transplanting in the field. During that time the farmers took careful steps to completely control weeds growing on the beds, as these compete with the young plants for the nutrients available in the seedbed soil and affect their good growth.

Paulino and Guiad transplanted their seedlings at 60 days after sowing (DAS), when the young plants attained a height of 15 centimeters (cm). They selected only the good-sized seedlings for transplanting, and discarded the small ones. They spaced the transplants at 25 cm by 25 cm between hills and rows on their plots, to which they applied chicken manure as basal fertilizer. Their plots are a meter wide, 50 meters long, and 30 cm from the ground. They planted three rows of seedlings per plot.

A month after transplanting, the farmers sidedressed their plots with 16-16-16 fertilizer, chicken manure, and ammonium sulfate to provide an abundant supply of nutrients within the plants’ restricted root system during the celery’s last month of culture.

They irrigated their plants frequently, as moisture lack could considerably affect the yield and quality of their crop, sourcing water from springs in their areas. In Mankayan, the more progressive Guiad used a sprinkler system in watering his field. In cultivating their plots, the farmers confined it to just at the soil surface, taking care to avoid injuring the roots which were 15 to 30 cm from the plant’s base. To control weeds, they mulched the plots with dried grass or rice straw.

Celery plants mature 60 to 65 days after transplanting. The farmers did not harvest too early in the season so as not to reduce their yield, but also not too late so as not to cause the quality of
the petioles to deteriorate. Harvesting is done by uprooting the entire plant then washing this before packing in plastic crates. Buyers who come for the harvests pay the prevailing farmgate price of Php20 per kilogram.

Paulino and Guiad earned more from Rijk Zwaan Stetham than from Condor Ventura because the new variety produced plants heavier 30 percent by more than those of the Condor celery. Most of the Stetham F1 plants each weighed from 700 grams to one kilogram.

The Secretary is an Organic Farmer