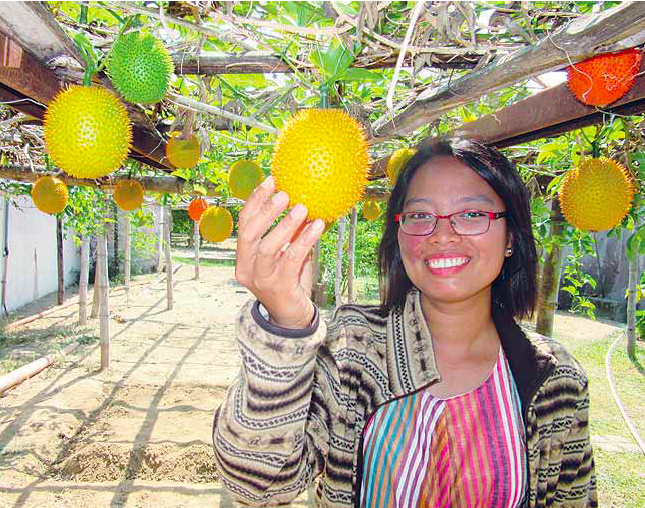 Whenever we visit a place, we always look for plants or farm animals that we think will interest our readers. Just like when we visited last March 21 the Mariano Marcos State University (MMSU) in Batac City in Ilocos Norte.

We met Dr. Gliceria Pascua, a recent retiree, who used to be in charge of the fruit crops nursery.
Now, the position has been taken over by her daughter, Glisten Faith.

Dr. Pascua, together with her daughter, briefed us on the fruit trees of interest. One of them is the Rabanal star apple which was registered with the National Seed Industry Council by Dr. Sixto Pascua, Glisten’s father.

Rabanal caimito, named after Jose Rabanal, is outstanding in a number of ways. It was the best caimito selection by the then-Philippine Council for Agriculture, Forestry and Natural Resources Research and Development (PCARRD) in 1995.

The fruit is big compared to other varieties. It weighs an average of 379.7 grams each. The flesh is creamy white to purple, very sweet (18.9 degrees brix), and the edible portion is 69.6 percent. This variety is a regular bearer and is very fruitful, according to Glisten.

Dr. Pascua was also excited telling us about their Cachuela bread fruit or rimas which bears fruit in just two years after planting the grafted tree in the ground. Their plant propagators are experts in grafting rimas on kamansi rootstock.

This cultivar is prolific and its fruits’ skin does not have the warty protrusions that are found in some selections. The fruits are sweet and fine-textured. By the way, the traditional technique taught in agricultural schools to multiply this seedless tree is to induce plantlets or sprouts to develop from the roots of the mother tree. This is done by making a cut on the roots. After the sprout has grown to a reasonable size and has developed its own roots, it is transferred to a seedling bag so it gets established before being planted in the ground.

Another technique that has been found effective by our friend Pol Rubia is marcotting. The stem to be marcotted (about one inch in diameter or thereabouts) is debarked. Two inches of the bark is removed all around the stem and allowed to dry out for about a week. After that, the debarked portion moss and kept in place by wrapping the same with transparent plastic. In two months, the new marcot will have developed roots. When the roots have become brownish, it is ready for cutting from the mother tree.

When we earlier met Gov. Imee Marcos, she wanted us to see the indigenous vegetables found in Adams, a mountain municipality which is not easily accessible. One of them is the Balbalosa, a native eggplant with tiny clustering purple fruits. It is perfect for cooking into pinakbet together with the other usual pinakbet vegetables. It could also be cooked simply with a dash of bagoong or fish paste.

Since it was a Saturday, the one in charge of the collection of indigenous plants was not around. So Dr. Pascua volunteered to show us the indigenous vegetables that Gov. Imee Marcos wanted us to see.

One other indigenous vegetable that caught our attention is the Sogod-sogod, botanically known as Momordica cochinchinensis. It is a relative of ampalaya, so it can serve as a sturdy rootstock for grafted ampalaya. The young fruits are cooked in the same way gourd or “upo” is cooked. Its tender shoots can be a substitute for ampalaya tops when cooking mungo. The young shoots could also be blanched and served as salad.

Mature orange fruits with soft spines are very colorful that is why they could be a good material for fruit and flower arrangements. It is something novel that decorators would love to use.

Birds love to eat the sweetish-sour berries of the bignay. It is also a favorite of wine makers in producing bignay wine. The bignay at MMSU is the Palamuti variety, which is a selection of the Institute of Plant Breeding at UP Los Baños.

Dr. Pascua said they harvested a lot of berries last February. When we visited the place last March 21, the tree was full of new flowers again. No special treatment is being given to the tree, except that it is continuously watered so the soil will not get too dry.

The variety can be propagated by seed. But to make sure that the resulting plant carries the desirable characteristics of Palamuti, grafted seedlings are being produced at the MMSU nursery.

There is a Sweet Elena mango that was donated by retired vice president Heraldo Layaoen. This is a carabao mango variety that originally came from Sta. Cruz, Zambales. Although the tree does not produce the big size that Sweet Elena is known for, it is a prolific and regular bearer at MMSU, according to Dr. Pascua. The eating quality is very good.

We noted three other varieties that MMSU is very proud of. One of them is the SRO Jackfruit which is named after Santiago R. Obien, a former MMSU president and long-time executive director of PhilRice. He is reported to be developing his orchard in a barangay in Batac and has ordered 400 grafted SROs from the nursery. Another variety is the Rambo avocado which is a violet variety that is fine-textured and sweet. Its seed coat does not stick to the flesh so that it is very convenient to prepare for the table. Then there is the Consuelo giant duhat which is named after MMSU’sfirst president, Dr. Consuelo Blanco. This has big fruits with small seeds.

While enrollment in agriculture is decreasing in many schools and colleges, it is not the case at the Mariano Marcos State University.

This was learned from Dr. Sixto Pascua Jr., chairman of the Department of Agricultural Sciences of the College of Agriculture, Food and Sustainable Development. He said that at the time of our interview, about 350 students consisting of 7 sections were enrolled in agricultural courses majoring in soil science, animal science, horticulture, and extension. Previous to that, there were only four sections.

The reasons for the increase in enrolment are the scholarships extended by different agencies, including the Commission on Higher Education (CHED), the Department of Science and Technology (DOST), Agricultural Training Institute (ATI), local government units (LGUs), and even by the Department of Social Welfare and Development (DSWD), which supports the schooling of some beneficiaries of the government’s 4Ps program.

For three years, MMSU did not offer the forestry course for lack of enrollees. Now, however, there are two sections taking up this course. The reason is the same as that for agricultural courses. Many of the enrollees in both agriculture and forestry courses come from Ilocos Norte, Ilocos Sur, and Pangasinan.

We met some of the forestry students doing their field work at the nursery. They were checking the status of the wildlings of indigenous species that they collected from the forest which they established under
plastic tunnel. The seedlings looked very good. They had developed new leaves.

We met Dr. Joselito Rosario, chairman of Department of Forestry at MMSU. He said that the wildlings that the forestry students were tending during our visit were part of an order for 60,000 seedlings by the Department of Environment and Natural Resources for its National Greening Program (NGP). Dr. Rosario said that the DENR had provided PhP 3.5 million to upgrade the nursery facilities of the nursery and in payment for the 60,000 seedlings the agency ordered. After the first 60,000 seedlings, the DENR is ordering another 60,000. These will be used in the NGP in Ilocos Norte. And the DENR will pay for the seedlings. All in all, it was an enlightening visit to the Mariano Marcos State University last March 20-
22, 2015.