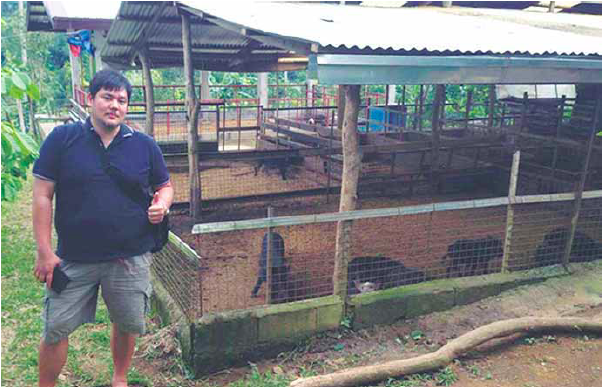 Ian Cabriga in front of his native pig pen in Silang, Cavite.

On a farm in Barangay Lumil Silang, Cavite, Ian Cabriga, farm owner, is raising native pigs. His passion for farming started when he decided to take over an idle farm lot that his wife inherited from her parents.

Learning it from ‘Hit and Miss’

Like many who ventured into farming without any experience, he soon discovered that it was almost guaranteed that he would fail—and that is exactly what happened to Cabriga. When he got into farming, he had nothing but guts to spare and a small amount of resources that he had put into farming just to realize a dream. “Experience is a great teacher; it pushes you to the limit until you have no one to turn to but yourself. (You can also) rely on others’ experiences and learn from them as well,” he says.

He adds that his experience proves that you don’t have to have experience to make things work for you. All you have to do is try and never give up. He did much research, and eventually stumbled upon the concept of natural farming. This was when he realized that all he had gone through was worth his while because, if not for his hit-and-miss experience, he would have not gone through the process of learning.

Cabriga says that natural farming has helped him discover a lot of possibilities, especially in native pig farming. “Back to basics is the pattern for farming, (as is) keeping it natural as possible. It does not only save you money but it gives you more ‘push’ (to discover) new things about nature.”

Now, he is sharing his experiences and giving advice through his Facebook page and group, the Philippine Native Pig Network. Many native pig aficionados are fortunate that they can now seek advice from people like Cabriga and will not have to go through all the trials he went through.

To date, Cabriga has about 120 heads of native pigs in his farm and is planning to increase his production to 200-250 this year.

Ian Cabriga in front of his native pig pen in Silang, Cavite.

The consensus is that native pigs are famous for lechon, and as a result, are much sought-after for making the popular dish. It is believed that their distinct taste comes from their diet and nutrients. It is also believed that it has a smaller amount of fat compared to commercial lechon, thus making it more healthy than lechon made from ordinary pigs.

But native pigs are not only good for lechon. Cabriga, for one, is making use of his native pig meat to process longganisa, bacon, ham, and other pork products. He serves these to guests at his resort and also sells them to friends, who say that you can really taste the difference in their home made products.

Cabriga is content with the accolades his native pig products are getting from friends and online buyers, and declares that raising native pigs is a viable business. He sells his smoked sausages for Php500/kilo (kg) and honey cured bacon for Php80 per 100 grams. Currently, his average sales are 20 kg a week for sausages and 5 kg of bacon.

He plans to increase production, aiming to eventually source animals from his network of native pig breeders and raisers to sustain production levels and address the demand for his products, which he can only supply on a limited basis.

For those interested in going into the same line of business, Cabriga says it is important to plan before executing, and to know your purpose. Are you doing it as a hobby or for business? “Many fail because they lack the most important part: planning. In your farm or the area where you will raise your native pigs, look for basic resources like feeds (San Fernando gabi, kamote, forage, and the like) and a water source. Before you even prepare the housing or shelter of your pigs, look for the right breeders of native pigs. Do not settle only for what’s available; look for the best, fastest-growing breeds. It will save you time in raising them and you will be able to sell them once they have reached the optimum weight most lechoneros look for. Join a support group. It will help you with your concerns in raising native pigs.”

For more information about native pig raising, you may email Ian B. Cabriga at ic_bil04@yahoo.com or text/call 09178822379. On Facebook, search for Ian B. Cabriga or the Philippine Native Pig Network.

This appeared without a byline as “A Very Promising Venture” in Agriculture Monthly’s May 2015 issue.

Fruits of Interest and More at MMSU

Lessons on Aquafeeds from a Specialist