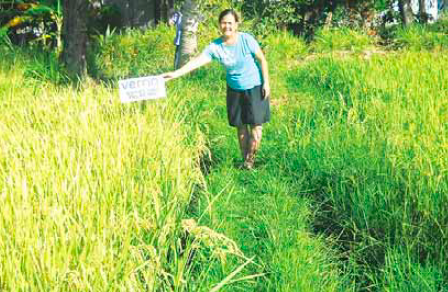 Divina Canare of Brgy. Laon in Abucay, Bataan shows her R-40 rice crop, to which she applied Verno. The field on her left was planted at the same time as hers but Verno was not applied to it.

The chairpersons of the 13 cooperatives from Balanga City and the towns of Abucay, Dinalupihan, Morong, and Pilar that make up the Balanga-based Tibig Agrarian Reform Community Cluster Association (TARCCA) in Bataan Province recently visited the fields of two rice farmers in Abucay to see the excellent results of their using a new fertilizer mix called Verno Foliar Granules.

Market development technologist Gerald Cortez of seed and crop care company Allied Botanical Corporation (ABC) coordinated the visit with TARCCA president Leonardo David, who is the chairman of the Balanga Agrarian Reform Beneficiaries Multi-Purpose Cooperative (BARBMPC). According to David, the 13 co-ops federated into the TARCCA have an aggregate membership of more than 2,000 rice farmers.

The new crop care product from ABC, Verno Foliar Granules, contains nutrients that help rice plants manufacture the food these need, especially during their vegetative, reproductive, and early ripening stages of growth. It’s a product of Nordox AS of Norway, the world’s leading producer of high-quality cuprous oxide for use in agrochemicals, and the manufacturer of Nordox 50WP and Nordox 75WP which are the only copper fungicides in the Philippine market that contain cuprous oxide as an active ingredient. The two Nordox variants are the crop protection products that rice and vegetable farmers, especially tomato growers, throughout the country have come to depend on and widely use in their fields.

Verno’s main components are copper and zinc. Copper is for making rice plants greener and more vigorous, and for enhancing grain-filling in every panicle, while zinc promotes more vigorous growth of the roots for better water and nutrients uptake, and helps bring about early grain maturity and increase the number of grains per panicle. Verno’s combined Copper and Zinc result in better yield and effectively corrects deficiencies of the two minerals in ricefields.

Verno also contains 2.2 percent (%) calcium, which helps the plants’ good growth and strengthens their resistance to stresses, and 1.8% magnesium for helping the plants manufacture their food well. The product’s micronized particles allow for easier absorption by the plants, thus ensuring faster efficacy, and for extended retention on the plant surfaces due to their size that prevents them from being washed off by rain.

The Institute for Marketology of Switzerland and the Organic Materials Review Institute of the U.S. certify Verno for organic farming. For the best results, users apply it by mixing 50 grams of the granules in 16 liters of water and spraying at 14 to 21 days after transplanting (DAT) for the first application, and at 45-50 DAT for the second.

In applying Verno with urea, users mix 500 grams of it with the fertilizer and apply at 0-7 DAT for the first application and at 21-28 DAT for the second. Subsequent applications with the Verno-urea mix depends on when the farmer side-dresses his field again.

Divina Canare of Brgy. Laon in Abucay, Bataan shows her R-40 rice crop, to which she applied Verno. The field on her left was planted at the same time as hers but Verno was not applied to it.

The destinations of the TARCCA visitation were the fields of two farmers, Divina Canare and Josefina Soriano– who are among the 51 members—all rice farmers—of the Capitangan Organic Farmers Marketing Cooperative (COFMaCo). According to the co-op’s chairman, Mamerto Tinao, the COFMaCo members till an aggregate 35 hectares of ricefields.

The first stop for the visitors was at the less-than-two-hectare field tilled by Canare and her two sisters as tenants in Abucay’s Barangay Laon. When she had tried using Verno for the first time for her wet season crop in 7,500 square meters (sq. m.) planted to the R-40 rice variety, her yield from that portion increased from 48 to 64 cavans despite unfavorable conditions.

She didn’t expect a good yield because her field got flooded when the creek adjacent to it overflowed due to heavy rains just a little after two weeks from transplanting. Surprisingly, tillering still went on very well, showing how Verno made their plants grow sturdily. She decided to apply Verno again, this time in their entire tenanted field, to see how it performed in their main dry season crop. The result was even better than with the first use, so the sisters went on to use Verno for the third time.

Soriano is an innovative entrepreneurial lady who treats farming as a serious business. In early 2012, she took advantage of an opportunity to produce a highly-profitable crop when the BARBMPC, which had a sweet pepper production and marketing contract with a Central Luzon vegetable trading firm, had an overproduction of hybrid sweet pepper seedlings that its members could not use in their farms.

As her field and its neighbors are blessed with free-flowing water from an aquifer of the notable groundwater basins of Central Luzon (where extensive and productive aquifers exist), Soriano knew this would enable her to go into vegetable growing. She bought 3,000 of the 25-day-old seedlings and planted these in 1,850 sq. m. of her field where she had previously applied 80 50-kilogram bags of processed organic fertilizer—her co-op COFMaCo being a manufacturer of the soil amendment material from chicken manure, carbonized rice hull, and composted leguminous plant leaves. She solved the problem of the need for barrier netting above the plants to protect them from excess solar heat with dried coconut fronds and rice straw attached to kakawate poles for shielding her plants from the noonday sun.

Soriano harvested fruits from her plants for three months. Each plant produced an average of five kilos of sweet pepper, or a total of about 15,000 kilos. The first harvests were just enough for the market in Abucay, to which she sold her produce at Php70 to Php100 per kilo, depending on the supply situation that prevailed. As harvesting progressed, however, the local market became less and less able to absorb her production. But ABC region sales manager Anastacio Ong arranged for a fruits-andvegetables canning company to buy her produce. She sold all of her sweet pepper at an average price of Php40 per kilo because not all of the fruits were first-class, resulting in a total gross income of Php600,000. Not bad for a first vegetable production venture by a lady farmer.

After trying Verno in half of her eight-hectare ricefield in Barangay Capitangan in the wet season, Soriano got an average yield increment of 10 cavans per hectare at harvest despite a typhoon that caused other farmers to get poor yields. She decided to use the new product in all of her field planted to hybrid varieties, applying a total of two kilograms of Verno per hectare. This time, at harvest, she got an average increase in yield of 15 cavans per hectare. She also decided to use Verno again for her wet season planting. She hosted the second and last stop of the TARCCA observation tour.

In the fields of Canare and Soriano, the visitors easily saw the vigor and sturdiness of the rice plants and how their panicles were weighed down because these were teeming with well-filled heavy grains, in contrast to the crops in the adjacent fields whose farmers did not use Verno. Visibly impressed, they began to bombard ABC’s Cortez and Ong with questions on the availability, cost, and other details about the new product.

Cortez showed the farmer-leaders samples of Verno and explained how and why it enables rice plants to grow vigorously and sturdily and boost yields of the grain despite stresses caused by unfavorable weather conditions. He also presented Nordox 75WP which the farmers can use to prevent Bacterial Leaf Blight, Leaf Streak, Rice Blast, and Neck Rot at the cost of only a little more than Php300 per hectare. Like Verno, Nordox consists of micronized particles that cannot be washed away from the leaf surfaces by rainfall, thus doing away with the need for a costly sticker solution.

After the testimonials of Canare and Soriano on their experience with Verno, Ong commended the co-op heads on their receptiveness to the use of an innovative product that, as they had just seen, had been proven to considerably benefit rice crops. As some of the farmers present said they wanted to try using Verno in their fields as soon as possible, he informed them that members of their co-ops can buy Verno through an arrangement with TARCCA itself to facilitate deliveries in bulk to the association and thus also enable it to avail itself of price discounts.

Feed is Not Source of PEDv Infection, says OIE