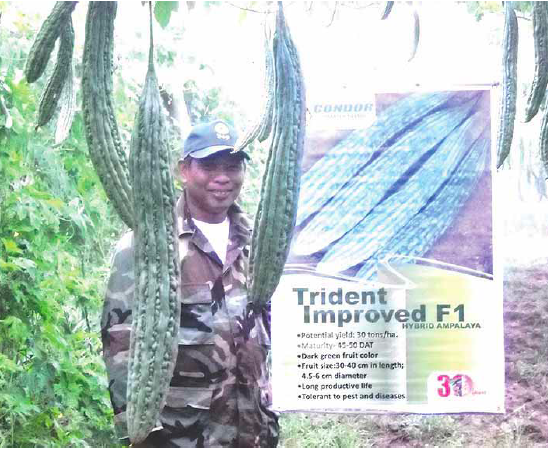 A farmer finds success with the bitter gourd.

Ricardo Bagcal is a farmer of Barangay Bagnos in the town of Aurora, a third-class municipality of Isabela province that’s the so-called “Gateway to the Mallig Plains Region,” a 119,900-hectare (ha) area in the central-western part of the province named after the Mallig River that traverses it. In addition to Aurora, the towns of Roxas, Burgos, Mallig, Quirino, Quezon, and San Manuel are also in the region.

Aurora has a total area of 11,556 ha, nearly all of it devoted to multi-crop farming. Most of the soil in the town is sandy-loam to clay-loam. The farmers grow rice, yellow corn, Burley tobacco, vegetables, and calamansi, with the last two crops mainly for the markets of Roxas, the Mallig Region’s center of business and commerce to the north, and Cabatuan and San Mateo to the south. Regional economists predict Roxas will be the next city in Cagayan Valley (Region 2) in the near future, after the existing cities of Santiago, Cauayan, and Ilagan in Isabela and Tuguegarao in Cagayan. The dominant vegetables that the Aurora farmers plant are ampalaya, eggplant, and hot pepper.

In 2014, Bagcal, who has years of experience in producing ampalaya in portions of his two-and-a-half- hectare land planted mostly to yellow corn and Burley tobacco, tried planting a variety of the vegetable known as Condor Trident Improved F1, recommended by Allied Botanical Corporation Market Development technologist Monico Bautista. Bagcal planted the variety in 4,000 square meters to see for himself what Bautista said about the variety that he was the first to plant in Bagnos. He was not disappointed because that first Condor Trident Ampalaya crop gave him a net income of Php135,000.

Greatly encouraged and gratified by that very first result, Bagcal again sowed seeds of the variety during the first week of December, this time directly sowing 6,000 seeds of Condor Trident Improved F1 in double the initial area he had previously planted. But he staggered planting to avoid ending up harvesting too many ampalaya fruits when the time came and having difficulty selling them to viajeros at a good farmgate price.

Bagcal sowed the Trident Improved F1 seeds directly on his 50-centimeter (cm)-wide and 25 meter (m)-long plots that were two-and-a-half m apart. After applying a handful of processed organic fertilizer and 30 grams (g) of 14-14-14 in every planting hole as basal fertilization, he covered the fertilizers with fine soil before dropping the ampalaya seeds in. The planting holes were on a single line at a distance of a meter from each other on the plots.

He side-dressed his crop two times—the first time at 15 days after sowing with 20 to 40 g of urea which he applied 10 to 12 cm from each plant. Then, at 30 days after sowing, he applied 10-18-24, a fertilizer that he used for his tobacco crop, by the broadcast method. He followed these applications by broadcasting 10-18-24 and 0-0-50 two weeks later and after every two weeks thereafter.

When his vines were still young, Bagcal watered each plant with the use of a hose. After the vines began flowering at about 40 days after sowing, he irrigated these by flooding the wide space between the rows of his plants for a short time, then for a longer time when the vines began to develop fruits. The fertilization regimen and adequate irrigation supplied by deep well pumps caused the vigorous growth, branching, and fruit development of the Condor Improved Trident vines.

The vigorous growth and strength of the Trident variety were demonstrated when the vines were
hardly affected by the cold front and light to moderate rains brought by the seasonal northeast monsoon that the northern and central Luzon provinces experienced at the time. In Aurora, the temperature dropped to 14 degrees Celsius on foggy and chilly mornings, especially when the cold front peaked from early January to mid-February, according to the Philippine Atmospheric Geophysical and Astronomical Services Administration.

Because of the cold weather, other ampalaya varieties grown by Bagcal’s fellow farmers suffered slower growth and flowering. The Condor variety was clearly superior to the others not only in terms of its vigorous growth, improved disease resistance, and higher yield potential, but also in its tolerance to serious environmental stress.

The maturity of Bagcal’s Trident Improved F1 crops was, in fact, delayed by more than a week. The variety matures 60 to 65 days after sowing but Bagcal’s crop took longer than that. He saw, however, that the number of big-sized fruits that the vines were bearing would be much more than what his initial planting in 2014 produced. He was also confident he would pick fruits continuously for up to two months.

Tolerant to pests and diseases, Condor Trident Improved F1 vines have a long productive life. The variety bears dark green fruits that are 30 to 40 cm long, four-and-a-half to six cm in diameter, and weighing from 350 to 400 g each. The potential yield per hectare is 30,000 kilograms (kg). Bagcal was sure that this time, he would more than double his net income from the initial crop that he had grown in only half the present area currently given over to it.

He began to harvest fruits between 70 and 75 days after sowing, picking ampalaya every three days. He was able to harvest more than 50 kg in his first picking, gradually increasing this to up to 300 kg per picking. Each of his vines eventually produced an average of 14 fruits with an average weight of 245 g each, or a total of 3.43 kg of fruit per vine on the average. At the conservative estimate of 5,750 vines that survived of the total that Bagcal had planted, he harvested more than 19,700 kg of Condor Trident Improved Ampalaya.