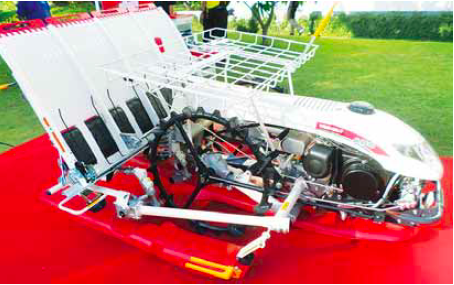 A small model of a rice transplanter.

The chairperson of the Senate Committee on Agriculture and Food cited the entry of Yanmar Philippines in the local market as being a big boost to the farm mechanization efforts in the country.

Senator Cynthia Villar was one of the main speakers during the recent launch of the farm machines from Yanmar of Japan in Pasay City. These included tractors for land preparation, mechanical rice transplanters, and combine harvesters. These were launched last March 17 at the Sofitel Hotel in Pasay City.

Yanmar of Japan has partnered with the Ropali Group of Companies for the local distribution of the farm machines. Ropali, founded by Roberto P. Alingog, is a diversified company with a wide distribution network and banking facilities.

The availability of the farm machines will enable the Filipino farmers and agricultural workers to
increase their productivity at less cost, and to become more efficient and competitive as they are
exposed to advanced and state-of-the-art Japanese technology and machinery, according to Sen. Villar.

The senator observed that the implementation of the Agriculture and Fisheries Modernization Act (AFMA) seems slow. She pointed out that the AFMA calls for the allocation of at least Php20 billion a year for agriculture modernization programs and projects, yet the country lags far behind its regional neighbors in farm mechanization, ranking a distant fifth to Japan, South Korea, China, and Thailand.

Sen. Villar is glad, however, that the Department of Agriculture is already strengthening mechanization efforts in the agriculture sector, adding that recently, she was with the DA during the distribution of farm machines and the launch of projects worth Php1.1 billion in Regions 11 and 12 in Mindanao.

Sen. Villar expressed optimism that the new Agriculture and Fisheries Mechanization (AFMECH) law will help promote the development and adoption of modern, appropriate, cost-effective, and environmentally safe agricultural and fisheries machinery and equipment. This will enhance farm productivity and efficiency, and help the country achieve food security while increasing farmers’ income.

She revealed that no less than NEDA, the National Economic and Development Authority, has acknowledged that the Philippines needs to invest in research and development (R&D), and that the country can increase the productivity of agriculture and boost job creation in the industry through science and technology. This is expected to fast track the growth of the agriculture, fisheries, and forestry (AFF) sector, she said.

Sen, Villar cited the need to improve the global competitiveness of local farmers and the country’s agriculture sector as a whole. The country’s integration into the ASEAN Economic Community (AEC) starting December this year will bring about cutthroat competition; thus,Filipinos have to be globally competitive, she concluded.

The other speaker at the product launching was former Finance Minister Cesar E. A. Virata.He stressed the need for more investments in agriculture for a number of very good reasons. For one, the Philippines imports a lot of agricultural products, which means there is a ready market for as long as the local
produce is competitive. Aside from rice, the Philippines’ big agricultural imports include coffee, cacao, and milk. Another reason is that there are wide, unutilized or underutilized areas that can be harnessed for crop and livestock production.

There is also plenty of idle local capital. He pointed out there are a lot of savings that are not invested in agriculture. He hinted that the land reform program should not be extended because after all these years, the poor farmers have remained poor,if they have not become poorer. What he advocates is for experts to come up with a model of development for each crop that will produce commercial quantities of quality agricultural products.

A possible approach to commercial production is the clustering of production of certain products. This could lead to value-adding through the establishment of processing plants. However, in order for processing plants to prosper, there should be a continuous supply of raw materials to ensure year-round operations.

As an example, Viratalamented how a tomato processing plant in Bukidnon did not prosper because there was a lack of raw materials for processing.

An Aurora, Isabela Farmer and his Moneymaking Ampalaya