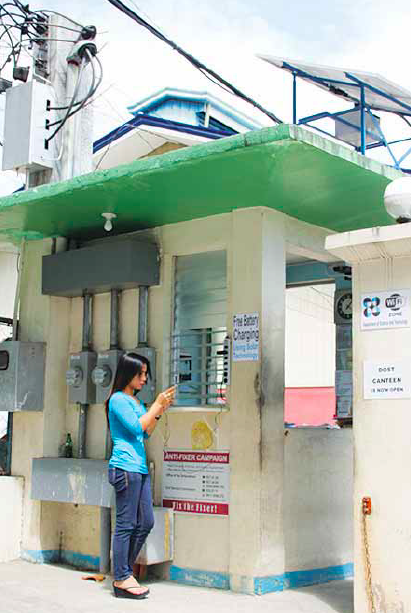 The Department of Science and Technology in Region VII (DOST 7) recently installed a solar power charging kiosk at the entrance of its office in Sudlon, Lahug, Cebu City.

DOST Regional Director Engr. Edilberto L. Paradela said that the kiosk would enable visitors to the office to appreciate science and technology. “This is a simple technology that may be very useful for them…It works like a mobile phone power bank with a socket (where the) charger of a device (may be plugged in).” The kiosk, however, can accommodate multiple items for charging as it has a bigger capacity, and makes use of solar power to charge its batteries.

The same type of kiosk was first deployed in Leyte to provide a temporary power source to residents in the aftermath of super typhoon Yolanda. These kiosks were stationed, and are still available, at Philippine Science High School-Eastern Visayas Campus in Palo, Leyte; Sogod, Southern Leyte; and Brgy. Mancilang, Madridejos, Cebu.

Paradela declared that the kiosks were highly useful during disasters, as proven by how they helped residents in Leyte after the devastation brought about by Yolanda. During such disasters, there is no telling when power will be restored.

He added that the kiosks enable DOST 7 to showcase the use of renewable energy in greening the environment to lessen carbon dioxide (CO2) emissions, reduce energy consumption, and perhaps contribute to disaster risk reduction.

The solar power charging system has a 200W capacity and is comprised of a 2 x 100W solar panel; a 2 x 70 ampere-hour solar battery; 1 unit 300W inverter; and 1 unit 20 ampere-hour charge controller. This can accommodate the simultaneous charging of 20 units of mobile phones, or 10 units of rechargeable flashlights, or two laptops.