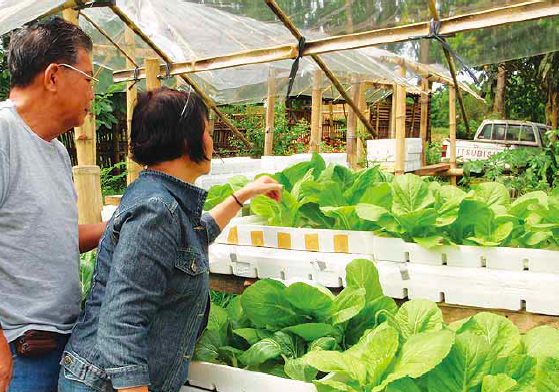 A couple in Bukidnon inspects lettuce grown through SNAP hydroponics.

Build your own hydroponics setup using the SNAP method.

The term ‘hydroponics’ conjures images of high technology. But for all the high science that laymen associate with soilless crop culture, hydroponics—or at least its precursor—was practiced by ancient people like the Aztecs without the benefit of the equipment and materials that optimal hydroponics employs.

Driven by the sheer need to survive after more powerful neighbors denied them access to arable lands, the Aztecs settled in the marshy shore of Lake Tenochtitlan in the great central valley of what is now Mexico.

Employing a method of agriculture that may have been in existence since the 6th century BC, the Aztecs built rafts of rushes and reeds lashed together with tough roots, then dredged up soil from the shallow bottom of the lake and piled this on the rafts, which were called ‘chinampas’.

On the chinampas, recorded to have reached an aggregate of 9,000 hectares, they grew amaranth, beans, chia, maize, and other crops. (1998 G.V. Deutschmann Sr.)

Once idle, this subdivision lot in Marikina has turned productive because of SNAP hydroponics.

Dr. William Gericke of the University of California is credited for doing extensive research work on hydroponics. Coined by Dr. Gericke from two Greek words—hydro meaning ‘water’ and ponos meaning ‘labor’—hydroponics had a complex start in the modern world.

Those who want to try their hand at hydroponics can find a cheap, easy, and simple method in the system developed by the Institute of Plant Breeding (IPB) in a Department of Agriculture–Bureau of Agricultural Research (DA-BAR) study conducted by Prof. Primitivo Jose A. Santos and Dr. Eureka Teresa Ocampo, entitled “Protective Cultivation of High-Value Vegetable Crops Using Simple Nutrient Addition Program (SNAP) in Hydroponics for Home and Commercial Growers.”

Prof. Santos explains that the acronym ‘SNAP’ was coined to capture the relative ease and simplicity with which the method they developed is practiced. Indeed, the method is user- and environment-friendly. It uses recycled styrofoam fruit boxes and 8-ounce disposable tumblers (which would otherwise merely be environmental menaces), seedlings, clean water, and the SNAP fertilizer. (See “How to Set Up SNAP Hydroponics,” part 2 of this feature) The setup may be placed under the eaves of a house or any place where it will not be rained on and where there is adequate ventilation and sunshine.

Harvesting lettuce produced through SNAP hydroponics at the UPLB Institute of Plant Breeding.

The IPB has used conventional hydroponics as a research tool since the mid-90s but the power crisis compromised the research because it used an electricity-driven compressor for active aeration. They changed tack at a most opportune time when urban agriculture became a priority of the Department of Agriculture.

Prof. Santos’ team developed SNAP hydroponics for high-value leafy vegetables such as lettuce, cauliflower, broccoli, celery, herbs, tomato, pepper, cucumber, and ampalaya in Marikina, where the system has been in use for three years now, as well as in Cebu, Rizal, and many areas in Laguna.

Why would researchers supposedly doing plant breeding go into SNAP hydroponics? Prof. Santos says that establishing the standards of the technology is only “in aid” of the plant breeding research work that their team will soon undertake. On their priority list is coming up with plant varieties that grow best in SNAP hydroponics.

A couple in Bukidnon inspects lettuce grown through SNAP hydroponics.

Benefits of the Technology

Doubting Thomases may be quick to dismiss hydroponics as a ‘wrong’ technology because our country has large tracts of arable lands. But they should remember that we have lost more and more of these lands to conversion. Moreover, raising plants in a non-soil medium will allow us to grow crops that mature more rapidly and produce greater yields using a limited amount of space, conserve fertilizer (because leaching does not happen), eliminate soil-borne pests, diseases, and weeds, and turn non-arable lands into productive hydroponics farmlands.

SNAP hydroponics also saves on labor requirements. Prof. Santos says that only one person is needed to take care of a 1,000 square meter (sq. m.) area SNAP hydroponics greenhouse. Much of the work is done after finishing the SNAP hydroponics setup, and the work left to do before harvest is to periodically check that the hydroponics solution is within the desired level. What’s more, SNAP hydroponics only requires a small investment of less than Php100 per sq. m. during the first season, and even less in succeeding seasons.

As the Aztecs had to cope with adversity by tapping their ingenuity, will we soon see modern-day Aztecs in every Filipino home that hopes to combat hunger and want? Will enterprising farmers see relief in this technology that promises to bring down production costs?

The University of the Philippines-Los Baños (UPLB) is consistently engaged in the war against food insecurity. SNAP hydroponics is one technology that will help bring about food sufficiency and lower food production costs. It could make food producers out of many urban residents, even those in the nooks and crannies of urban settlements. As the Aztecs surmounted unimaginable odds to attain food security, so too can Filipinos through the use of UPLB’s SNAP hydroponics.

Heat Stress in Swine a Serious Concern in the Philippines, says U.S. Expert

Setting Up: Hydroponics in a SNAP, Part 2