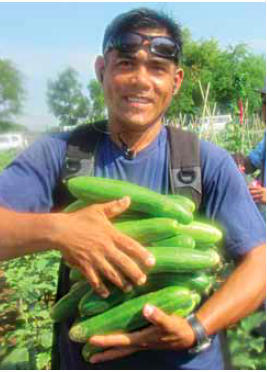 A trainee with new variety of patola.

A harvest festival aimed at turning good farmers into better ones.

Meeting ordinary men and women who are eager to learn improved farming techniques always gives us a wonderful feeling. It means there are people who are determined to improve their economic status by getting into some kind of farming or gardening.

That’s what we felt when we attended the harvest festival culminating the season-long training of some 118 men and women who comprised the 89th batch of the Kabalikat sa Kabuhayan vegetable training program of SM Foundation in collaboration with Harbest Agribusiness.

The 89th KSK Batch and their harvest in San Jose del Monte City.

The harvest festival was held in Brgy. Kaypi-an in San Jose del Monte City, Bulacan. The trainees were so proud in showing their harvest of vegetables and other crops that they planted and took care during their 12 weeks of attending weekly lectures and actually tilling the soil.

The KSK program is now on its eighth year, and there is no sign of its stopping. That’s because the sponsors continue to witness the impact of their program on the lives of the less
privileged members of society.

In the 89th KSK batch, women outnumbered the men participants. Many of them are beneficiaries of the Pantawid Sa Kahirapan program of the Department of Social Welfare and Development (DSWD).

The good thing about vegetable production is that it can be undertaken by both men and women, even in a limited space. It can be, of course, a big venture or just a small part-time job for those who are employed or doing some other livelihood projects.

Many of the participants did not have previous experience in growing crops but they have proven that they can produce marketable harvests with the guidance of a capable technician. This is with the use of the right varieties and other improved techniques in farming.

Dang Estrella and Pedroso with a halved Brilliant honeydew melon.

Among the varieties that they successfully produced are a honeydew melon and watermelon. The Brilliant honeydew melon is one variety that can help them earn a good income. This bears fruits weighing 2 to 3 kilos each in a growing period of 75 days.

The beauty of this variety is that it can be grown during the dry season as well as in the rainy season. An off-season crop could be produced during the rainy season that could command a high price. In the supermarkets, one kilo may fetch more than a hundred pesos. Another variety that they successfully produced is the Diana watermelon. This has yellow skin and red flesh that is sweet and juicy.

One crop that can be produced in just a matter of 20 to 25 days from sowing is upland kangkong.
There is also a big demand for this on the market. It was also suggested during the forum that vegetable shoots used in cooking can also be profitable to grow. These include camote tops, alugbati, talinum, spinach, and malunggay. The important thing is that a person should be creative not only in producing the same but also in selling them on the market.

Toto Barcelona, president of Harbest Agribusiness and a partner of SM Foundation in implementing the training program, talked about the moneymaking possibilities of vegetable production, but he emphasized that quality is very important to be able to penetrate the supermarkets and get a good price for their produce.

Cristy Angeles of the SM Foundation also emphasized the importance of the members of the community cooperating with one another so that they can program the production of crops that a particular target market requires. The big markets, for instance, want a steady supply of quality farm produce, and this can be achieved if the growers form an association that will be able to meet the requirements of their buyers.

The group that planted Diana watermelon.

She also emphasized the importance of undertaking vegetable production as an honest-to-goodness business. That is why after the graduation from the production side, the participants will attend further training in business practices such as accounting.

Running their vegetable production as a business will help assure them of success in their projects.

Know How to Save

We were also requested to give some advice to the participants. We told them that many of the successful farmers we met while doing our journalistic job started with very little resources. But they were able to come up with their own strategies in order to succeed.

One strategy is that they know how to save. They have discipline. We cited as an example two high school graduates from Isabela who got married right after graduation. They did not have any big savings but they were enterprising enough to make a go of their married life.

A trainee with new variety of patola.

The parents of the guy lent the couple a one-hectare lot for them to cultivate. And they planted this to corn. In their first cropping, they grossed Php17,000. What did they do with that amount? They saved every centavo of it. They used that to rent an additional farm lot so they had a bigger area for growing corn. Some farmers also mortgaged their lands to the couple, who saved every peso of income from their succeeding corn crops, and used these to rent more and more land. Eventually, they were able to buy the lands they rented or which were mortgaged to them.

Ice Candy for Their Daily Bread

And how did they survive in their early married life when they did not spend their income from corn for their daily sustenance? Well, the guy rode his bike to the next barangay every morning where there was electricity. He bought a hundred pieces of ice candy at 50 centavos each. He sold these to his barriomates for 75 centavos apiece so they received a profit of R25 each day. That was enough to take care of their daily food requirements. After all, they lived in the barrio where vegetables are fresh and can be had for a song.

A net protects the plants from insects and intense rain.

Next, they planted latundan banana along the periphery of the one-hectare lot that the man’s parents gave them to till. In a little over one year, they started harvesting their bananas and they had more money to rent or buy more land.

At the time of our interview, the couple already had more than a dozen hectares of their own. They had sent their children to school. And the woman had put up her own mini-grocery in the barrio. Also, they had become financiers of other farmers who approached them for production loans come rice-planting time. They were usually paid in palay after harvest, so they also became rice traders.

In short, they were able to accumulate their assets because they knew how to save. They had the discipline to achieve their vision of a better life.

Basic Guide for Would-Be Swine Raisers in the Philippines, Part 1