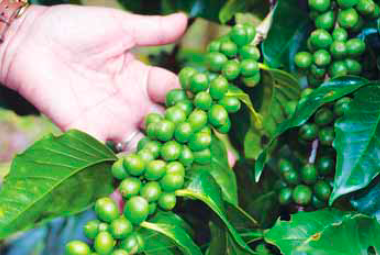 Coffee can be intercropped with coconut trees for additional income of farmers.

The Pope speaks out on the importance of agriculture.

Vatican City (VIS) — The primacy of agricultural development, right to food, the problem of waste, the impact of the market on hunger, water issues, land grabbing, and dependence on external aid was the theme of the address of Pope Francis to the 450 participants during the 39th Conference of the Food and Agriculture Organization (FAO), whom he received in audience at the Clementine Hall of the Apostolic Palace here recently.

“Faced with the poverty of many of our brothers and sisters,sometimes I think that the issue of hunger and agricultural development has now become one of the many problems in this time of crisis,” the Pope said. Pope Francis also cited the prices of wheat, rice, corn, soy, which are sometimes linked to performance funds and therefore, the higher the price the more the fund earns.

“Here as well, we must take another path, convincing ourselves that the products of the land have a value that we can all ‘sacred’ because they are the fruit of the daily labor of persons, families, and communities of farmers,” the Pope said.

It can be noted that the purpose of the FAO includes working of the land, fisheries, livestock, and forests. “This development must be at the center of economic activity. This means supporting effective resilience, specifically reinforcing communities’ capacities to cope with crises, natural ones or those caused by human action, and paying attention to the different needs. Thus it will be possible to pursue a decent standard of living,” Pope Francis explained.

The Pontiff added that this commitment includes other critical points. “First, it seems difficult to accept the general resignation, disinterest, and even absence of so many, even of states. At times, there is the sense that hunger is an unpopular topic, an insoluble problem that can’t be dealt with in a legislative or presidential term and therefore can’t guarantee consensus,” he said. “The reasons that lead to limiting the contributions of ideas, technology, expertise, and funding lie in the unwillingness to make binding commitments, seeing that we hide behind the question of the world economic crisis and the idea that there is hunger in all countries,” he added.

The Pope went on to explain that our tendency to “defect” when faced with difficult issues is human, but, we must respond to the imperative nature of access to necessary food—which is a right for all.

He said that human rights permit no exclusions. “Certainly, we can take comfort knowing that the number of hungry persons in 1992, 1.2 million, has been reduced even though the world population has grown.”

“However, there is little point to noting the numbers or even projecting a series of concrete commitments and recommendations to be implemented in policies and investments if we neglect the obligation to ‘eradicate hunger and prevent all forms of malnutrition in the world,’” he noted.

“Many are worried about statistics regarding waste – a third of food produced is included under this point,” observed the Pontiff.

“Reducing waste is essential, as is reflection on the nonalimentary use of agricultural products, which go in large amounts to animal feed or to produce biofuels. Certainly we must ensure increasingly healthy environmental conditions, but can we keep excluding some?” he asked.

It is necessary to raise the awareness of all countries regarding the type of nutrition adopted, and this varies depending on the latitudes…But, both in quality and quantity, the situation of uncertainty is determined by the weather, by increased demand, and price uncertainty weigh down the situation.

“We must also ask ourselves: How much does the market, with its rules, impact world hunger? Of the studies you have made, it has been shown that, since 2008, the price of food has changed trends. It doubled, then stabilized, but with higher values than the previous period. Such volatile prices impede the poorest from making plans or keeping a minimum nutrition. The causes are many. We are rightly concerned with climate change but we cannot forget financial speculation,” he pointed out.

“But then it is forgotten that, if poverty in one country is a social problem that can find solutions, in other contexts, it is a social problem and social policies are not enough to address it. This attitude may change if we put solidarity at the heart of international relations, transposing the vocabulary of policy options to a policy of the other,” he said.

The Pope also noted the need for educating persons regarding proper nutrition. “We know that in the west, the problem is high consumption and waste. In the south, however, it is necessary to encourage local production to ensure nutrition. In many countries with ‘chronic hunger,’ (local produce) is replaced by foreign food, perhaps initially through assistance. But emergency aid is not enough and does not always reach the right hands. It creates a dependence on large producers and, if the country lacks the financial means, then the population winds up not eating and hunger grows,” the Pope explained.

Climate change also makes the people think of the forced displacement of populations and the many humanitarian tragedies caused by lack of resources, particularly water, which is already a source of conflict that is expected to increase, the Pope said.

“It isn’t enough to assert that there is a right to water without making the effort to achieve sustainable consumption of this good and to eliminate any waste. Besides water, land use also
remains a serious problem,” the Pope added.“Ever more troubling is the seizure of arable land by transnational companies and states, which not only deprives farmers of an essential commodity, it also directly affects countries’ sovereignty.”

There are too many areas where the foods produced go to foreign countries and the local population is impoverished twice, since they have neither food nor land.

“We know that the world’s food production is largely the work of family farms. Therefore it is important,” the Pope emphasized. Pope Francis said that the different organizations, including
the FAO, strengthen their partnerships and projects in favor of family businesses, and encourage states to equitably regulate land use and ownership.

“This may help eliminate the inequalities that are now at the center of international attention,” the Pope concluded.