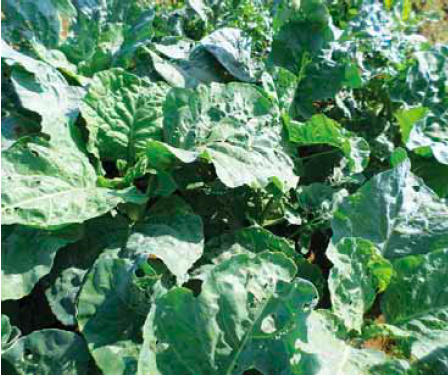 Supravim has been registered for use with leafy vegetables.

A new kind of fertilizer that is very different from the ordinary nitrogen-phosphorus-potassium (NPK) formulation is now on the market.

It is a plant growth booster derived from natural plant extracts that is a product of nano or colloidal technology.

Anthony A. Cortes holding
a liter of Supravim.

The fertilizer is called Supravim, and as a product of nanotechnology, the particles are so minute that they are readily absorbed by the plants, whether the fertilizer is sprayed on the leaves and stems. Supravim, according to Anthony A. Cortes (who heads Corvill Agricom, distributor of Supravim, which originates from the United States), does not totally replace the regular fertilizers applied to the soil, but it helps reduce the amount that the farmer needs to apply.

When applied during the early stages of plant growth, the fertilizer stimulates the natural growth defenses of plants at the cellular level, encouraging increased root size which in turn allows for the more efficient uptake of nutrients and moisture in the stalks and leaves. It can also be applied
during the more advanced stage of plant growth, during which it improves the stamina of the plants, enabling them to resist stresses like low levels of moisture in the soil.

Supravim is not an insecticide, but according to Cortes, it reduces insect damage by increasing sugar production inside the plant. Because many insects cannot effectively digest sugar, they will turn to other plants to eat. This means there will be a lower demand for insecticides, which in turn means fewer chemicals will be introduced into the ecosystem, and reduced costs for the farmer.

Supravim has been registered for use with leafy vegetables.

Cortes emphasizes that Supravim is a natural blend of 99.9 percent processed extracts of natural plants (phytochemicals) and is completely biodegradable. It is not hazardous to human health, nor does it do anything to degrade the environment.

It also acts as an effective surfactant, helping to evenly spread the mixture over the leaves and other plant surfaces, thereby maximizing plant absorption and effectiveness. Supravim is now registered with the Fertilizer and Pesticide Authority (FPA) for use with leafy vegetables. Field tests are ongoing for eventual FPA registration for fruit crops, rice, corn, and other crops.

A Tasty ‘Lettuce Field Day’ at the Kalye Luntian Farm