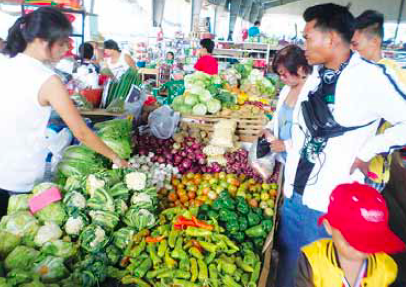 Wherever we go, we seem to always encounter good news. Just like when we visited Quezon province last March 27 to 28. We were pleasantly surprised to see how big the agricultural trading post in Sariaya has become.

This is the Sentrong Pamilihan ng Produktong Agrikultura sa Quezon which was the pet project of Sec. Proceso J. Alcala when he was a congressman. When we first visited the place about five years ago, there was not much trading activity. The volume of vegetables being traded was just about four tons. And the trading did not last the whole day.

Dorie Merano, a staff member of Sentrong Pamilihan, and Dorie S. Bernabe, president of PHSI, at the retail section.

Today, the trading post is operating 24 hours a day, seven days a week, according to Dorie Merano, an accounting staff member. And the volume of daily transactions hovers at around 100 tons. The trading post is now a ready market for farmers growing mostly vegetables in Quezon and other places, including as far as Nueva Ecija.

It is also a major source of supplies for lowland as well as highland vegetables for traders. The traders come not only from southern Luzon provinces but also from Metro Manila. It is, of course, understandable because prices are very reasonable, and the quality of the merchandise is at par with the best provincial markets.

The progress of the trading post can be attributed to the government’s support as well as the cooperation of the private sector. The suppliers of high-grade seeds, for instance, played an important role in increasing the productivity of the farmers.

The seed companies knew that there was a great business opportunity offered by the trading post. Many of them offered their services by conducting seminars on how to grow the improved vegetable varieties. We know of the efforts of technicians of Allied Botanical Corporation, East-West Seed Company, and other industry players in teaching the farmers.

And we also came to know of farmers who improved their economic status because of the vegetables that they grow and sell through the trading post.

Bong Rivera and Norma Villanueva of the Philippine Horticultural Society posing with a sweet corn seller.

We remember Ramil Barte, for instance. Ramil was victimized by a recruiter who promised him a job in Japan. He lost about Php100,000 to the fake recruiter. As it turned out, however, it was a blessing in disguise that he was a victim of a fake recruiter. He stayed home to become a vegetable grower.

Today, he is one of the most successful farmers in Quezon. He is now a millionaire, driving a brand new pickup truck. He is also the head of a farmers’ cooperative, and we are told he has put up his own agricultural supply store.

Of course, there are many others like him who are benefiting from the establishment of the trading post in Sariaya.

Basic Guide for Would-Be Swine Raisers in the Philippines, Part 2