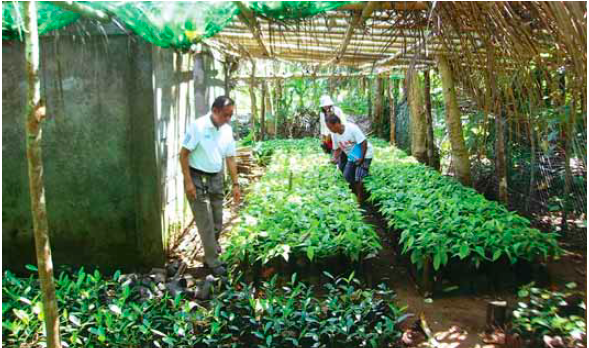 This is one of the co-op’s seedling nurseries in Sanchez Mira, Cagayan.

In March 1986, 31 men and women of Masisit and Dacal, two adjacent barangays of Sanchez Mira, the third town in the north-western end of Cagayan Province, founded the small Masisit-Dacal Rural Improvement Club Credit Cooperative, Inc. with their share capital that amounted to Php4,215. The maximum loan amount that each member could take out was Php500.

Workers tend sugarcane and corn crops at one of the co-op’s 80-hectare farms in Iguig, Cagayan.

A distinct factor in the co-op’s growth in 29 years is the industriousness, conscientiousness, and strong family ties of the members, who are mostly farmers and fisherfolk. The co-op’s founders are from the town of Paoay in Ilocos Norte Province, Cagayan’s immediate neighbor to the southwest, who migrated to Masisit and Dacal, which are Sanchez Mira’s northernmost barangays nearest the shore of the Babuyan Channel or, as it’s also called, Luzon Strait. The migrants chose the two places to settle in because they came from seaside barrios in Paoay.

The civic-minded Paoayeñas promptly joined the Rural Improvement Club while their men became members of the Samahang Nayon Organization. They wanted to see what they could do for a better life than what they had in Paoay.

Finding most of their expectations unmet in the two barangay associations, however, they decided to organize themselves into a credit cooperative with the assistance of the then-Ministry of Agriculture’s Bureau of Cooperative Development so they could avail themselves of loans for livelihood projects like salt and bagoong making, meat processing, the manufacture of hollow blocks, rattan crafts, and basket making. One of the organizers was young public school teacher Froilan M. Pacris.

By the end of that first year, co-op membership and share capital had grown to 72 and Php36,215, respectively. The maximum loanable amount per member increased to Php1,000. New members now had a Pre-Membership Education Seminar to attend first. After being confirmed by the Department of Agriculture’s (DA) Cooperative Development Authority (CDA) In May 1991, the Credit Co-op amended its Articles of Cooperation and By-Laws during its annual General Assembly Meeting in March 1992 to become a multi-purpose cooperative to meet the pressing problems of the time. Pacris became general manager.

The co-op’s farms are planted to Robusta coffee trees intercropped with coconut.

“Fast-increasing demands for financial assistance by the members for more livelihood projects prompted us to seek the assistance of financial institutions,” says Pacris. “The Department of Trade and Industry (DTI) responded with two successive loans, the last one at Php2 million. In October 1994, we added a new service to our members through the opening of a consumer store that initially sold farm inputs and groceries.”

The need for additional capital motivated the co-op to approach the Land Bank of the Philippines (LBP) Cagayan Valley Lending Center, now its chief financier, for further financial assistance. In 1995 it applied and subsequently attained approval to avail itself of a rediscounting facility in the amount of Php2 million with the LBP Sanchez Mira Field Office, a fund that the co-op availed itself of before every planting season for its members since then, and which gradually increased to Php6 million and eventually, Php15 million.

At present, the MDLC avails itself of a short-term loan line of Php50 million and a step-up loan line (also of Php50 million) with the LBP. It also tapped the National Livelihood Development Corporation (NLDC) that extended a credit line of PhP20 million to meet the need for additional financial assistance for the livelihood projects of its growing membership. That credit line is now Php40 million.

“In August 1996, after making do with a small and dilapidated office building for about a decade, we acquired our own new building in our 333-square meter (sq. m.) lot in Masisit,” says Pacris. “Co-op services expanded rapidly and our area of operations extended from Sanchez Mira to throughout Cagayan and its southern neighbor Apayao, the Cordillera Administrative Region’s northernmost province. We also started equipping ourselves with computers and computer programs for our daily operations, the result of our partnership with the LBP which classifies us as a Class A Cooperative.”

In order to increase and improve the services that the coop offers to its members, especially the small farmers, and to provide solutions to their post-harvest problems, the MDLC decided to obtain a soft loan of Php3 million payable over 10 years for a Farm-level Grains Center Project from the National Agriculture and Fishery Council through the DA Region 2’s Agribusiness Department.

This is one of the co-op’s seedling nurseries in Sanchez Mira, Cagayan.

The co-op bought as its counterpart a 4,530 sq. m. lot in Masisit for the warehouse constructed in July 1999. April 2001 saw the addition of a rice mill and the purchase of a four-wheel-drive tractor and mediumsized truck. Later years saw the addition of a rice-and-corn harvester, a six-ton mechanical dryer powered by a rice hull-fed furnace, and a 400 sq. m. solar dryer, enabling the co-op to engage in a full-fledged grains
business from then on.

The MDLC next established an Integrated Farm Mechanization and Trading Center in Barangay Malekkeg, Sta. Marcela, Apayao to help the area’s farmers with activities from land preparation to postharvest, and for them to be able to produce high-quality rice and corn crops. Project financing came from the 2003 R10 million Corn Development Fund of the National Food Authority. Project components are a 4-wheel-drive tractor, an 8-ton recirculating mechanical dryer with rice hull-fed furnace, a pneumatic corn planter, a dumping trailer, and a warehouse with a floor area of 400 sq. m. To date the co-op has acquired three more 4-wheel-drive tractors, expanded its warehouse floor area by 350 sq. m., and constructed a 500 sq. m. solar dryer.

Looking Towards the Future

In October 2004, the MDLC inaugurated its Training Center and Beach Resort at its 20-hectare shorefront property in Masisit. Total project cost was Php2.5 million. Another building worth Php1.5 million for use as a Fishermen’s Center for conducting livelihood training for its all its fisherfolk members rose at the site in 2007, while a 350 sq. m. swimming pool was another addition in 2009. Since its organization in 2013, the Northern Philippines Cooperative Union, of which Pacris is outgoing chairman and which holds office at MDLC, conducts its training courses for co-op members and employees in Northern Luzon at the Training Center.

In 2005, the co-op operationalized a 20-sow breeding project, a 50-head fattening section, and a biogas facility. The breeding set-up supplies its members with F1 weanlings, gilts, and boars, and up to 2,000 piglets for fattening each year. It also serves as training ground for its members in artificial insemination, medication, vaccination, castration, and other swine-raising services. “We acquire breeding sows, boars, and feeds through a special arrangement with a large agribusiness company in Central Luzon.” says Pacris. “The arrangement enables us to avail [ourselves] of quality stock and feeds for our members who are into swine raising.”

In August 2007, the Cooperative constructed its self-funded gasoline refilling station (Flying V) at its own lot adjacent to the Integrated Farm Mechanization and Trading Center in Sta. Marcela, Apayao, and a bio-fertilizer mixing plant the following year.

Vegetable crops are also among those grown in the cooperative’s farms.

The co-op began developing two 80-hectare integrated farms, one in Brgy. Sta. Barbara, Iguig, Cagayan near Tuguegarao City in 2009, the other in Malukkit, Centro 2, Sanchez Mira in 2011, planting these to rice, corn, coconut, sugarcane, cassava, saba banana, coffee, cacao, and vegetables. In 2012, it started a 20-hectare reforestation project in Malukkit under an agreement with the office of the Department of Environment and Natural Resources in Sanchez Mira, establishing seedling nurseries for forest trees, and those of coconut, coffee, and cacao for intercropping with the forest species.

“We plant a lot of coconuts because we believe it will continue to be a mainstay of our agriculture in light of the Association of Southeast Asian Nations’ regional economic integration,” says Pacris, who retired from the Department of Education after serving for 45 years, 25 of those as a school administrator. “As of end-2014, we have planted 9,276 coconut trees in 42 hectares in our farms and beach resort under a Memorandum of Agreement with the Philippine Coconut Authority, which entitles us to an incentive of PhP 18 per seedling planted and PhP22 per tree after a year of being established. Our coconut trees are 10 meters apart so there’s space for intercrops. We have also planted 10,500 Robusta coffee and 9,000 cacao trees.

“Our cassava plantings are part of a tie-up with the San Miguel Purefoods Company which will buy our harvests for its feedmilling business,” he continues. “Our sugarcane in our Iguig farm is less than 50 kilometers away from the Cagayan Robina Sugar Milling Company in Piat town in the southwest part of our province. When we harvest our saba bananas, our Employees Association will get a Php700,000 grant from the Department of Labor and Employment [to acquire] equipment for making banana chips.”

He shares that MLC’s agribusiness operations grossed less than Php800,000 in 2014 and has not impacted its revenue picture because of expenses such as workers’ salaries and in developing the farms, in which it continues to invest part of its earnings.

“Our farms employ more than 100 seasonal workers to whom we pay the minimum daily wage for three to six months each year,” says Pacris. “But as our agri-operations expand, gradual production volume increases will boost our profitability and enable it to rank next to our credit operations, which accounts for the bulk in our revenue, posting Php22 million in 2014. Our 2014 net income was about Php6.5 million.”

The MDLC has become a major player in promoting economic growth in northern Cagayan and Apayao in serving its members not only by financially supporting their livelihood projects but also by providing access to new technologies in crop, livestock, and aquaculture production through training courses and seminars. It also carries out community and socio-civic activities that benefit the barangays. Aside from piggery projects, members raise tilapia in cages at the Namuac River and other tributaries of the Pamplona River. Other members raise ducks or chickens or grow short-term crops like vegetables after rice.

“Aside from our main consumer store and agri-center located at Centro Sanchez Mira, we established other agri-centers in Claveria, Abulug, and Ballesteros towns and in Sta. Marcela, Apayao for such outlets to be more accessible to our members in those localities,” says Pacris. “The Centers provide animal and fish feeds, biologics, seeds, fertilizers, and other farm inputs at fair prices.”

Many co-op assisted tilapia fishcage operations, like this one in a river in Sanchez Mira, provide a source of livelihood for its members.

The co-op is what it is today as a result of the commitment, dedication, and hard work of its officers and staff and the continued support of its members, whose loan repayment rate is 79 percent. Through its years of viable operation, the MDLC has received numerous awards and citations, among the most cherished of which are the LBP Ginintuang Gawad Pitak (Agri-Based Category) in 2010, given to Hall of Fame awardees in the LBP National Gawad Pitak; the National- Level Gawad Saka Small Farm and Fisherfolk Organization Award from the DA in 2004; and the Most Outstanding Non-Government Organization Award from the DTI in 1995.