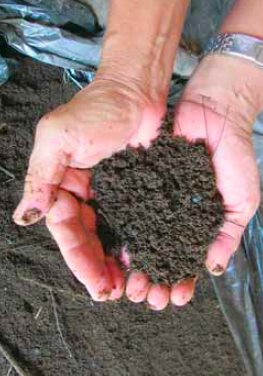 Close-up of the vermicompost.

Solsona is a third class town in Ilocos Norte with a population of about 23,000; many of them are farmers who grow rice, corn, and vegetables.

Most of them are smallholders, so they don’t really earn much from their farms, but many of them are better off now, thanks to the earthworms they are culturing to produce organic fertilizer. Solsona has now become the number one producer of vermicompost in Ilocos Norte. It is produced by more than 500 farmers who are members of a cooperative.

Mayor de Lara (second from left) and the mechanical shaker-strainer in operation. At right is Ronald Costales, who visited the project.

In 2013, the Bureau of Soils and Water Management of the Department of Agriculture gave the town an award that included cash for having been the No. 2 producer of vermicompost in the entire Philippines. The No.1 producer was a town in Nueva Ecija.

Vermicomposting in Solsona started in earnest in 2011 under the leadership of former mayor Joseph de Lara. It happened that the year before, Mayor De Lara visited the Philippine Carabao Center in Nueva Ecija where he came to know about vermicomposting. He thought that if the technology could be adopted by his constituents, they would no longer have to buy expensive chemical fertilizers for their crops.

What he did was to have the farmers trained on the technique of vermicomposting, although there were a few who were not easily convinced of its potential. The farmers were given starter kits of one kilo of earthworms, and taught how to prepare the vermiculture bins and farm wastes to feed the earthworms.

Mayor de Lara checking the consistency of the vermicompost.

It did not take long for the farmers to realize that vermicomposting was good for them. They were able to produce the fertilizer they applied to their farms and also had extra to sell. In a culture period of 45 days, the one kilo of earthworms would have produced five bags of vermicompost worth Php1,250 plus an additional five kilos of earthworms which the farmers could either sell or use for their own operations. A kilo sells for as much as Php500 in the market.

According to Mayor Jonathan de Lara, who succeeded his father in 2013, they formed a cooperative that is supervised by the local government. The co-op buys all the excess vermicompost production of the farmers. But to make sure the vermicompost meets quality standards, it passes through a mechanical shakers trainer provided by the local government. That’s to make sure the particles are small, are more or less uniform, and of the right moisture content.

RJ Pinera of the Ilocos Norte governor’s office posing with the
vermi bins beside the Solsona municipal hall. This serves as a demonstration for visitors.

As Solsona has become known as a producer of vermicompost, the organic fertilizer has been sold to farmers or cooperatives in other towns of the province and even outside Ilocos Norte. The Bureau of Soils and Water Management (BSWM) has also become a big help in demonstrating the efficacy of organic fertilizer in farming through its Expanded Modified Rapid Composting Project (EMRCP).

The BSWM put up demonstration farms in farmers’ fields using vermicompost bought from the cooperative. During the first season, BSWM bought 1,000 bags of vermicompost from the co-op worth Php250,000 for use in the demo farm of 100 hectares. In the succeeding season, the BSWM increased the demo area to 200 hectares, which meant using Php500,000 worth of vermicompost.

The Value of Indigenous Vegetables