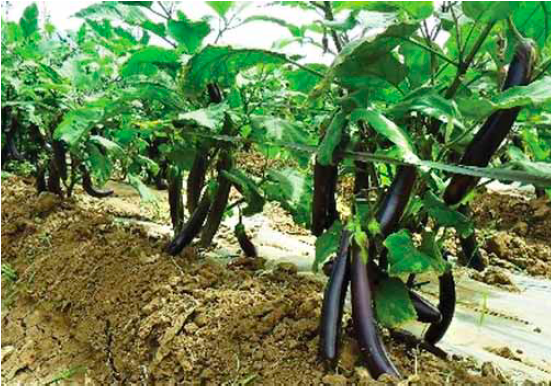 About 50 members of the San Rafael Vegetable Growers Association (SRVGA) of Bulacan recently accepted the invitation of the Maronquillo Multi-Purpose Cooperative (MMPC) in San Rafael’s Barangay Maronquillo to an afternoon meeting which the co-op and vegetable seed and crop care company Allied Botanical Corporation (ABC) hosted to introduce them to Lightning.

No, not the lightning that occurs during thunderstorms, but the Condor hybrid eggplant variety. It’s a highly prolific early-maturing eggplant whose fruits come in clusters of up to four pieces weighing 100 to 120 grams per cluster, and which are harvestable in only 60 to 65 days after transplanting. The variety’s glossy purple fruits are cylindrical, have an average length of 25 centimeters (cm), and have green, purple-tinged calyxes.

Each Lightning plant can bear from 2.7 to 3.0 kilograms (kg) of fruit during its productive life. The plant, which usually attains a height of 1.35 meters, is vigorous and strongly resistant to Bacterial Wilt disease, aside from being tolerant to pests and other diseases. The ABC Research and Breeding Farm in Tayug, Pangasinan developed, bred, and subjected the variety to multi-location trials before releasing it for commercial planting in 2012 for its high yield, pest-disease resistance and tolerance, and potential profitability.

In Maronquillo, MMPC general manager Federico Secor Jr. became a Farmer-Scientist designate of the Central Luzon Agricultural Resources Research and Development Consortium (CLARRDEC) of the Department of Science and Technology’s Philippine Council for Agriculture, Forestry and Natural Resources Research and Development (DOST-PCARRD) in 2010 for the successful innovative cropping methods that he shares with his fellow-farmers.

CLARRDEC is one of the eight Regional Research and Development Consortia of the DOST-PCARRD in its National Agriculture and Resources R&D Network. The Farmer-Scientist designation automatically made Secor’s two-hectare farm—which is planted to rice and vegetables—a Science- and Technology-based Farm demo site, not only for San Rafael and Bulacan, but also for all of Central Luzon.

Farmer scientist Federico Secor Jr. (left) talks about his Condor Lightning eggplants to four members of the San Rafael, Bulacan Vegetable Growers Association who were among the visitors to his farm in Barangay Maronquillo.

The purpose of the afternoon meeting at the MMPC was for Secor to report to the SRVGA members on the results of the trials for Condor Lightning Eggplant in his farm. A former trader who brought vegetables and fruits to Balintawak Market in Metro Manila, Secor had heard of how eggplant producers in San Rafael were not successful in growing an eggplant that perfectly (or even just almost perfectly) suited the preferences of consumers. The eggplant varieties that they grew produced fruits that were either too big, did not have good color, and/or did not taste good enough for the consumers’ liking.

Secor had been a guest of ABC in its farm’s annual Open House in Pangasinan in February 2014. He had seen the eggplant varieties grown there but had not been impressed. “The farm exhibited only about 20 plants of each variety,” said Secor. “That did not give me much information on how a field of hundreds or even thousands of plants of one variety would fare. For instance, pests are not a problem for 20 plants because a worker or two can easily hand-pick the insects from them.”

After his visit to Tayug, Secor agreed to hold trials in his farm in Maronquillo for two Condor eggplant varieties—Spitfire and Lightning—each in 50 square meters (sq. m.) in his field, where he also grows sitao and ampalaya. He coordinated with ABC market development technologist Gerald Cortez. The results that he got with Lightning made him decide to subsequently plant it in 1,500 sq. m. of his field in 2015.

“Spitfire had very good vegetative growth but fewer fruits than Lightning,” said Secor. “The fruits of the latter also were of a better color, just the right size and weight for consumers’ preference,
and tasted good when eaten. The plants continued to bear fruit for up to a year.”

After thoroughly preparing his field by plowing it, leaving it under the sun for two weeks, then plowing it again and harrowing it, he built plots for Lightning that were 40 cm wide, 40 cm high, and 50 m long, with the beds 120 cm apart.

He dug out the middle of each plot to their entire length, placed dried chicken manure there, covered it with soil, and transplanted 24-day-old Lightning seedlngs two weeks later in the first week of March.

He planted a total of 1,280 seedlings. He did not mulch the plots because he saw that it would just make his field hotter. In fact, he allowed weeds to grow to half their normal height so the plots would be cooler during April’s hottest days. The only pests that attacked his plants were whiteflies.

“I tried controlling their population but to no avail,” said Secor. “But [when] the rains [come, they will soon] be gone.” Testing the plants by withholding watering for up to three days at a time, he found that Lightning can withstand the stress well. He also found that the chicken manure alone was an insufficient source of nutrients for the plants.

“Because of my fertilization scheme, the plants did not readily bear fruit but seemed to be slow bearers,” said Secor. “As Lightning is a hybrid variety, it also needs inorganic fertilizer to be able to [fulfill] its potential yield. ABC has the testimonial of a farmer in Morong, Rizal who harvested
2.8 kg of fruit from his 3,000 sq. m. field, immediately picking 500 kg of Lightning eggplant after the first week of fruiting because he fertilized his crop with a new controlled-release urea and potassium fertilizer that needs to be applied only once in three to four months.”

He reported everything to the SRVGA members present at the meeting, after which he led the group to his farm for a close look at his Condor Lightning plants. The more experienced eggplant growers among the visitors agreed that his chicken manure fertilization was indeed not enough and fruiting was definitely slow. But the plants, they said, were already flowering well and a boost from an application of, say, some 16-16-16 fertilizer would result in many clustered fruits.

Cash crops like vegetables are the most preferred income source of Maronquillo residents, who till an aggregate area of more than 400 hectares in their rain-fed barangay. Secor himself grows just enough rice for his family’s consumption.

“Our town’s proximity to the biggest consumer market that’s Metro Manila spurs us to produce many vegetables such as the pinakbet ones and some leafy greens like alugbati which we grow abundantly here in San Rafael,” he said. “Call alugbati ‘lowly’, but to many growers of it here who bring thousands of kilos of it to Balintawak every week, it’s a sizeable moneymaker.”

Vegetable growers make up the majority of the members of the MMPC, of which Secor was one of the founders 24 years ago. It main revenue sources are its credit business, harvest and post-harvest services, and a farm inputs store. It has a harvester combine for hiring out to rice farms and used to also be able to hire out a tractor for land preparation, but the co-op decided to sideline the machine because of the difficulty and great expense in procuring spare parts for its continued operation.

“Our 136 members are all Maronquillo residents at present,” said the co-op’s general manager. “The Department of Agriculture’s Cooperative Development Authority still has to approve our application to open membership to residents of San Rafael and the entire province.”

The Value of Indigenous Vegetables

Bring Back the Tradition of Eating Brown Rice