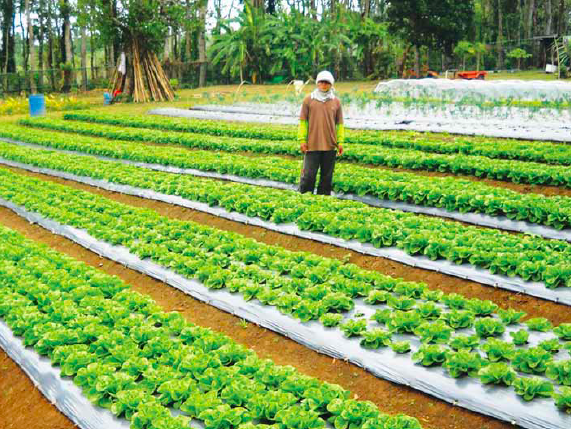 The production of lettuce—the most popular vegetable for salads and sandwiches—on a commercial scale in this country has grown because fresh salads are becoming increasingly common table fare for many Filipinos who want a healthy lifestyle.

Lettuce has joined the array of green leafy vegetables that have become abundant in local markets and supermarkets as more and more people appreciate the health benefits of consuming such greens and their relatively low prices.

The number of medium to small farming operations in the mid- to high-elevation areas of the country producing mixed varieties of lettuce has increased in the last five years. Harvest volumes of the leafy veggie have grown because of the increased demand from farmers’ markets, supermarkets, hotels, restaurants, fast-food chains, and high-end food service companies.

The top lettuce-producing province in the country is Benguet in Northern Luzon’s Cordillera Administrative Region (CAR). Many farmers in the Benguet towns of La Trinidad, Tublay, Atok, Bokod, Kabayan, Buguias, Bakun, and Mankayan along the 150-kilometer Halsema Highway—also known as the “Mountain Trail” as it connects Baguio City to Sagada, Mountain Province—produce lettuce.

Halsema—which boasts of having the highest point in the Philippine highway system of 2,255 meters above sea level in Atok—is the only route that the farmers can take in bringing their produce to La Trinidad and Baguio.

In La Trinidad, the provincial capital and trading center, hundreds of small landless farmers grow lettuce regularly; they rent lots with a maximum size of 1,000 square meters per farmer in the annex fields of Benguet State University (BSU) for Php15 per square meter per year.

BSU rents out cropping sites at its annexes in Barangays Betag and Balili as one of its income generating projects for supplementing the annual subsidy that it receives from the government as a state university. Just across the provincial highway from its sprawling main campus, Betag is the site of the University’s 32-hectare Strawberry and Vegetable Farm, an area that local residents know as “The Swamp” because of its watery state during the rainy months of the year.

The Balili site, a smaller area behind the main campus, is where BSU maintains its research and hands-on instruction facilities for openfield and greenhouse organic crop culture. Both sites are well suited for vegetable and strawberry production and are near the La Trinidad Vegetable Trading Center, where farmers can easily sell their produce to buyers.

Many progressive farmers in Benguet and its neighbor to the north, Mountain (Mt) Province, undertake intensive lettuce production by adopting crop protection technology that promotes the extensive use of rain shelters equipped with drip irrigation systems. Their major crops are lettuce and other salad vegetables.

Two outstanding high-value vegetable growers of the CAR—Francisco Ching of Mankayan, Benguet and Junie Calawa of Bauko, Mt. Province—are among those progressive farmers. Ching, the Department of Agriculture’s Gawad Saka Regional Awardee in the High-Value Crops Category, went on to win the National Award in 011-2012, while Calawa was Regional Winner for 2012-2013. Both farmers grow their crops in rain shelter greenhouses covering more than a hectare each in their farms. Like most of the other farmers of the region, they buy the seeds of their salad vegetables and herbs from the Allied Botanical Corporation (ABC).

Another prominent greenhouse horticulture area is the Silang-Tagaytay City-Alfonso-Mendez area of Cavite province, which commercially produces special greenhouse varieties of crops such as salad tomatoes, lettuce, cucumber, and culinary herbs.

Greenhouses and similar structures enable Gourmet Farms Inc. in Silang, for one, to sustain the supply of lettuce and herbs that it delivers to its customers in Metro Manila throughout the year. In Nasugbu, Batangas is a farm that’s part of a huge resort-hotel complex not far from the Cavite-Batangas boundary which produces lettuce in bulk for institutional buyers in its 27 rainbarrier-type greenhouses of various sizes.

A recent addition to the intensive producers of lettuce adopting protected cultivation in the area is the Kalye Luntian Farm in Alfonso’s Barangay Sulsugin. The farm, which has a total area of four hectares, grows the leafy vegetable organically in a greenhouse covering more than 1,650 square meters and in 4,000 square meters of plots protected by tunnel shelters. It produces three varieties of lettuce: Cos or Romaine, Batavia, and Lollo Rossa, bred by the Rijk Zwaan company of Holland, whose exclusive distributor in the Philippines is ABC. ABC made the first line of Rijk Zwaan lettuces available for commercial planting by Filipino farmers in August 2007. It supplies most of the lettuce varieties now being grown in the country.

The Kalye Luntian Farm was one of the venues of the First Rijk Zwaan Lettuce Field Day held in early May, where the Dutch company and ABC exhibited the complete assortment of 26 Rijk Zwaan varieties that are grown in the Philippines to familiarize growers and traders with the appropriate lettuce types required by the market segments.

The lettuce varieties fall into seven major types: Iceberg, Cos or Romaine, Batavia, Butterhead, Oakleaf, Lollo Rossa and Lollo Bionda. These in turn are generally classified as heading, semiheading, or loose-leaf lettuce. Batavia, Oakleaf, Lollo Rossa, and Lollo Bionda are loose-leafed lettuce; Butterhead and Iceberg are heading types; and Cos or Romaine is semi-heading.

Kalye Luntian Farm tapped the expertise of ABC technologist Michael Castillo in working towards its objective of producing organic lettuce in an intensive setup. As its small root system limits a lettuce plant’s ability to receive nutrients from the soil, Castillo prioritized the conditioning of the planting beds, especially in the greenhouse. He directed the farm’s land preparation workers, supervised by head caretaker Bonifacio Pasquil, to apply processed organic fertilizer composed of carbonized rice hull, chicken manure, and vermicompost at the rate of three kilograms per square meter of soil. Pasquil saw to it that soil pH ranged from 6.0 to 6.8.

Pelleting is the process of changing the seed form by covering it with a material; the main purpose for this is to improve uniformity of size and shape, resulting in improved sowing ability. Although more expensive than precision seeds, the pelleted ones are much easier and faster to sow, achieve a 99-percent germination rate, and eventually increase lettuce yield by 20 to 30 percent.

Before transplanting seedlings, workers drenched the plots in the greenhouse with a solution of Nordox 75WP and Effective Microorganisms (EM) mixed in water for preventing soil-borne diseases. Nordox is the only copper fungicide in the Philippine market that contains cuprous oxide as an active ingredient. The two variants of the fungicide are the crop protection products that rice and vegetable farmers—especially tomato growers—throughout the country have come to depend on and widely use in their fields. The Institute for Marketology of Switzerland and the Organic Materials Review Institute of the U.S. have certified Nordox for organic farming.

In the greenhouse, workers transplanted 25 seedlings for each square meter of space on the plots, with each length of dripline serving 380 plants. To control pests, they sprayed the plants with bio-insecticides. They use EM, vermicompost tea, and other organic formulations in fertigating the lettuce through the drip system every week. As a result of that fertilization regimen and the basal application of organic materials, the farm’s greenhouse section alone produces 600 kilograms of high-quality organic lettuce per week.