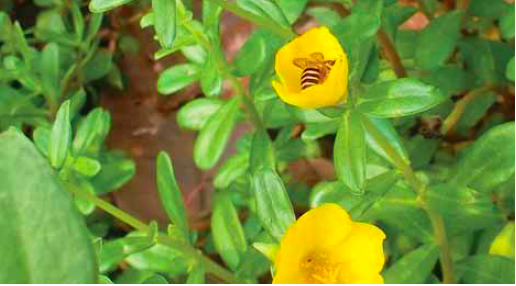 An example of an imported bee or the Apis melifera which is busy pollinating one of the flowers at bloom in the farm.

The Milea Bee Farm’s Way of Beekeepng in the Philippines.

Beekeeping may not be popular in the Philippines, and unknown to many, it can be a profitable endeavor, beneficial to both man and the environment. To venture into beekeeping, the foremost requirement is dedication, and a corresponding attention to the bees under one’s care.

An indigenous bee or Apis ceranais shown pollinating a flower at the Milea Bee Farm in San Jose, Batangas.

Milea Bee Farm in San Jose, Batangas, owned by Rico and Edilee Omoyon, is slowly becoming known for its success in the field. It started operations during the first quarter of 2010 for the sole purpose of serving the honey and beeswax needs of Milea Bath and Body Wellness Essentials (MBBWE), a producer of natural and organic personal care products. Because of the rising demand for bee products of the Milea Bath and Body line, and due to the erratic and sometimes inferior quality supply of these products from local honey hunters, Rico and Edilee decided to keep their own bees to produce their own supplies.

Early on in the business, the couple wanted to support local entrepreneurs and local farming communities.This prompted them to investigate how the honey hunters gather honey in the wild. That’s when they found that the local hunters’ practices were not only destructive, but could also contribute to wiping out the wild bee population because the hunters were burning whole bee colonies after obtaining the honey for their trade and larvae for food consumption.

An example of an imported bee or the Apis melifera which is busy pollinating one of the flowers at bloom in the farm.

Rico and Edilee also learned that farmers treated bees as pests, not knowing the concept of pollination. The farmers thought that bees would just sting, or in the case of stingless bees, enter their ears. Wanting to make a difference even in their own small way, the couple went on a nationwide campaign, teaching farmers about the concept of pollination and how bees can provide an additional source of income—all for free.

These activities, Rico says, were realized only through their advocacy group Spread Organic Agriculture in the Philippines (SOAP), and with the help of the Department of Agriculture (DA), which would sometimes provide the venue and transportation, Pangkat Kaunlaran of Ka Louie Tabing, and the Agri-Aqua Network, Inc. (AANI). Through these activities, the couple found cooperators who practiced the same beekeeping technologies and sustainable harvest procedures. These cooperators enabled the Omoyons to increase their capacity, and now help supply their growing demand for bee products.

The husband and wife team of Rico and Edilee
Omoyon welcome visitors and friends to their productive bee farm in
San Jose, Batangas.

“To date, we [continue to hold] seminars at the Milea Bee Farm, and have continuously improved the bio-diversity of the farm by cultivating native plant species that are beneficial to the bees. We have also been improving on our planting skills so we are now able to supply our family’s requirement for fresh fruits and vegetables,” Rico says. “We started to receive visitors on a pre-booking basis, [and] we show people what we do [while] introducing them to the wonderful world of bees,” he added.

Honeybees have long helped farmers around the globe through pollination, but until now, these insects have been greatly misunderstood, especially here in the Philippines. The word ‘bees’ and even actual encounters with these misunderstood pollinators oftentimes meant one thing to people, even farmers who see honeybees on a daily basis: a likelihood of being stung.

Native stingless bees abound at the farm of the
Omoyons in Batangas.

The honeybees you see visiting flowers are all females, which are called ‘workers’. Only the workers have stingers. It is not normal for unprovoked honey bees to sting, contrary to the usual notion of people. Honeybees die after stinging; thus, it will always be their last act, in defense of themselves or their hives. Worker bees have a lifespan of about 45 days, and their lives are anchored on work. “Who would want to die earlier when you know you barely have two months to live?” asks Rico.

Male honey bees, on the other hand, do not have stingers, and are not capable of defense as their only job is mating. Though they are very safe if handled properly, they produce a loud buzzing sound while in flight—and this sound is often what frightens people.

Native stingless bees abound at the farm of the
Omoyons in Batangas.

People also generalize and think that all buzzing insects are bees, though much work has been done to classify them by their species, color, behavior, or nesting place, just as what is done with birds. That’s why the mere sight of bees generates shivers, explains Rico. If we can only determine honey-producing bees from the other species, then this will totally change our perception of bees, he believes.

Wasps are the most aggressive species, and farms usually have had stinging encounters with them; this ruins the reputation of the bees. They are not afraid to sting as their stingers do not detach from their bodies afterwards and they will not die as a result of stinging. You can be stung repeatedly if you happen to be close to a nest. You can avoid this by knowing what wasps and their nests look like.

In Part 2, we tackle the different species of bees for specific purposes, and the advantages of beekeeping in the country.