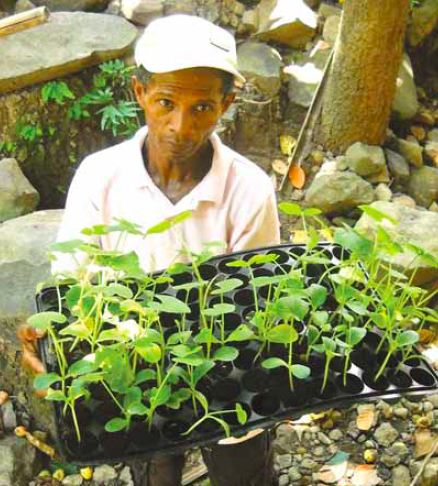 Trainee Orlando Liwanag of Sitio Mampueng shows the squash seedlings that he took care of.

The City of Olongapo in Zambales Province is training 94 of its Aeta citizens in three upland barangays to produce vegetables for their livelihood.

The City Agriculture Office (CAO) headed by Victorino Garengo Jr., and the City Planning and Development Office (CPDO) under architect Tonykar Balde III, are the lead agencies implementing the project. The Department of the Interior and Local Government is funding it through its Bottom-Up Budgeting Program as part of its mandate to strengthen the capability of local governments towards the effective delivery of basic services to their constituents.

Trainee Orlando
Liwanag of Sitio
Mampueng shows the
squash seedlings that
he took care of.

The vegetable production project sites are in three of Olongapo’s 17 barangays: Sitio Banca-Bancahan in Barangay Gordon Heights, Sitio Mampueng in Brgy. Old Cabalan, and Sitio Iram in Brgy. New Cabalan. The sites are mountainous and nearly still heavily-wooded. The city’s 2,300 Aeta families live in those and other upland areas.

The CPDO drew up the project to dissuade and prevent the Aetas from continuing the charcoal-making activities that they have been compelled to engage in as a means of earning a living. “Charcoal-making is as destructive as the kaingin or slash-and-burn farming system that ensured the end of forests in many areas of our country,” said City administrator Mamerto Malabute. “Those activities have caused (more) deforestation than commercial logging has. We don’t want it to happen to the woodlands around Olongapo which are our valuable watersheds. SubicWater, the private utility serving Olongapo City and the Subic Bay Freeport, sources the potable water that it supplies to Metro Olongapo there.”

Olongapo City has a total land area of 13,330 hectares, with some 70 percent of it sloping. The city proper is located on a 648-hectare tidal flatland ringed on three sides by the rugged Zambales Mountains that are home to the Aetas. In the past, those natives roamed the forests to gather ferns, wild vegetables, and fruits, and hunt labuyo (wild chicken), wild pig, and deer for their food.

“But as more and more lowlanders came with titles and fenced off much of the land, we suffered,” said Paquito de los Santos, a tribal elder at Banca-Bancahan. “We stayed because of the abundant water from the springs and some help from the government, which even built a school for my grandchildren and others. We had to learn to cut trees to make into charcoal to sell in the city.”

The Olongapo CAO and CPDO have partnered with agrisystems specialist 3C Irri-Tech Enterprise and vegetable and crop care firm Allied Botanical Corporation (ABC) in providing the package of technologies for efficient vegetable production being taught to the Aetas. 3C Irri-Tech has constructed 60-square meter rain-sheltered nurseries with drip irrigation, and dripirrigated growing plots in each of the three sitios, the sites being continuously well-watered by mountain springs that do not dry up even in the hottest months of the year. Each sitio initially has 2,000 square meters of grow-out fields for their vegetable crops.

“After they have gained experience in producing vegetables, we will expand their growing areas,” said Garengo Jr. “The sitios have enough space that are only slightly sloping for growing all that they will want to grow. In fact, we plan a second phase of their training that will cover chopsuey vegetables after they have mastered producing the pinakbet ones.”

“The success of this project will mean a lot to us in terms of our objective towards selfsufficiency
in vegetables,” said Malabute. “At present, Olongapo depends on food supplies from Bataan, Pampanga, Pangasinan, Nueva Ecija, and the Cordillera Administrative Region, as we virtually don’t have any
agriculture to speak of.”

ABC agronomists lecture the project beneficiaries and conduct hands-on training in all aspects of vegetable culture, from sowing seeds in the right growing medium to transplanting seedlings in plots basally applied with organic fertilizer and mulched with plastic film, to supplemental fertilization, managing pests and diseases, and eventual harvesting and proper post-harvest procedures. The trainees are in groups, with each assigned to the particular pinakbet vegetable that they will harvest before their graduation in September. The vegetables that they have started to work with are tomato, sitao, squash, eggplant, okra, and sili.

One of the groups of trainees in Sitio Mampueng has already transplanted squash seedlings on their plots, mulched with plastic film. The transplants are on straight single rows on the meter-wide plots two meters apart, showing the trainees’ conscientiousness in putting to practice what they are learning.

“ABC is helping the trainees produce as many quality seedlings as they can with its Klasmann Peat-based Substrate, which is said to be the best seedling growing medium available in the country today,” said Garengo Jr. “We will help them sell seedlings to farmers, urban gardeners, and schools teaching gardening so they can earn even while still training to be vegetable growers. This plan to enable them to immediately have a source of income is motivating the trainees to do their best in seedling production.”

“Sowing seeds in plastic seedling trays that we taught them to fill with Klasmann Substrate was the first thing that the trainees learned to do with much enthusiasm,” said agronomist Giovanni Monta, one of the ABC trainors. “While the nursery greenhouses were still being constructed by 3C Irri-Tech, the trainees brought home the seedling trays so they could care for the young plants well.”

After the trainees graduate and become semi-commercial or even commercial vegetable producers, the CAO and CPDO will provide them with stalls in the city market for them to directly sell their produce to consumers, another anticipated eventuality that is causing excitement among the Aetas. The Olongapo City Administration strongly discourages idleness and mendicancy, especially among the Aetas, and the market stalls will give the cultural minority the opportunity to show its productivity and usefulness to the community.

To facilitate transporting of the harvests on the mostly-rugged trails to and from the sitios in the uplands, the CPDO will purchase horses for bringing the produce to the city. As the animals that are for sale are not easy to find, the agency is already arranging for the initial procurement of 20 horses. There are no commercial horse breeders around—a pity because some of the young men of the sitios are accomplished horsemen who have learned to care for the few horses in their areas well.

The Olongapo CAO and CPDO personnel and those from ABC and 3C Irri-Tech involved in training the Aetas are sure their project will be a successful one because of the receptiveness and conscientiousness of their trainees to learn to produce vegetables, and the supportiveness being shown by the members of their communities.