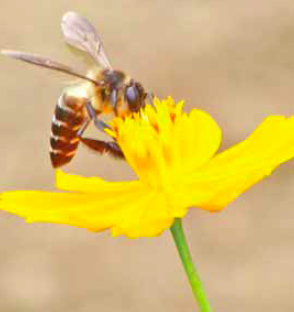 We previously featured Milea Bee Farm’s beekeeping techniques; this article focuses on the common honey producing bees in the country.

When apiculture or beekeeping is discussed, what immediately comes to mind are Italian or European honey bees (Apis mellifera), the most common species in the world propagated for pollination and honey production. If prospective beekeepers search the Internet for beekeeping videos or references, they will likely end up with materials on this species.

But according to Rico Omoyon, owner of the Milea Bee Farm in Balagtasin II, San Jose, Batangas, the videos or articles that are mostly available online are mostly created for conditions in the United States or Europe, which are very different from tropical beekeeping conditions. He adds that their farm was no exception.

Italian honey bees are still the most utilized apiary species in the Philippines, though start-up costs and the low availability of egg-laying queens prevent the increase of local beekeepers. However, the country is blessed with various feral honey producing bee species.

In the countryside, people have been harvesting honey in the wild for its health benefits and for an additional source of income. The feral species whose hives are most commonly harvested for honey is the Asian giant honey bee (Apis dorsata), locally known as pukyutan or putyukan. These bees usually make their nests on a branch of a tree angled 30 to 40 degrees; in it, they form a single comb that usually points downwards. This species is considered to be migratory as they build their nests in areas where forage is abundant.

These bees will perform a wave-like dance, emphasizing that they don’t want to be disturbed, when there are intruders.

A Pukyutan forager collects nectar from a flower. Notice its distinctive black and white stripes, and body length.

Recently, these bees were in the news after they apparently stung several Biology students who were gathering forest data. Omoyon notes though that these bees will only do so if provoked. When the colony is disturbed, these bees will most likely identify the nearest moving object as the culprit and attack.

At present, this species can only be found in the provinces, particularly in densely-planted areas, though a colony has been spotted right at the heart of the metropolis – but these bees cannot be boxed, Omoyon says.

A Laywan or Ligwan (Apis cerana) collects pollen from a Kulitis bloom; this is an indigenous vegetable.

Another wild species from which honey is harvested is the native honey bee (Apis cerana), locally known as laywan or ligwan. In the wild, the bees are usually found inside crevices that were formerly infested by termites, in discarded tires, old cabinets, holes along creeks, or even inside large and dry bamboos.

Laywan or Ligwan bees collect nectar from an Agave bloom together with
other small stingless bees.

These bees usually build their combs where they are capable of guarding the main entrance. However, they have been seen to nest in the open, but on very rare occasions.

They store honey in their combs during the summer months. While Apis cerana can be transferred to a box for propagation, honey production, and pollination, they prefer a hive that is stationary and located under a shaded area.

A stingless bee colony nesting in a crevice which was formerly occupied by termites.

Another wonderful honey producing pollinator is the native stingless bee (Tetragonula spp.), locally known as lukot, lukotan, kalulut, kiwot, kiyot, or lib-ug, according to Omoyon. If one sees it for the first time, one can easily mistake it for a fly, though the Tetragonula spp is half the size of one. This may be because the bee is black and it flies. Omoyon, who says he was born and raised in the Visayas, grew up playing with these stingless bees, “…but I never knew that [they could] be our partners for pollination, honey, propolis, and pollen production.”