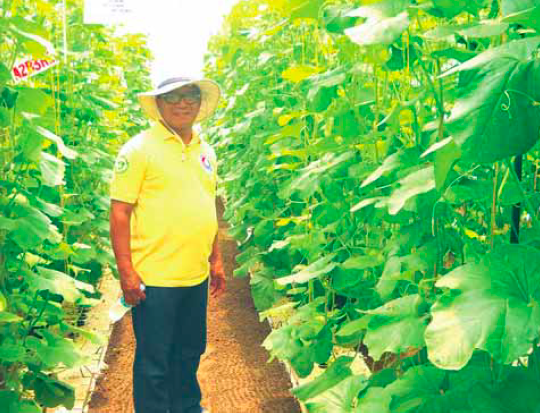 Central Luzon State University (CLSU) is making it easy for agri-entrepreneurs who want to venture into hydroponics or aquaponics growing systems.

World agriculture has a problem today; in 2050 it will need to feed 9.6 billion people, compared to the present population of seven billion. Scientists say that the quantity of food needed for that eventuality will require producing, for the next 35 years, the same quantity that the world’s farmers have produced over the last 8,000 years. All this must be done while facing the new challenges of inadequate land and water resources and negative environmental impacts like global warming and climate change.

To keep pace with the growing population, global food production will need to increase by 70 percent. That means farmers must get a lot smarter about how they raise crops.

With 38 percent of the world’s land already dedicated to agricultural production, the existing infrastructure has the potential to meet the demand.

But farmers, especially those in developing countries, need to rethink some of their existing practices so they can make better decisions about how and when they plant, grow, irrigate, harvest, and transport crops, and implement innovations needed for sustainable food production.

They need to practice the precision agriculture done by farmers in developed nations.

Based on precision agriculture, hydroponics crop growing systems can increase yields by at least 30 percent, while converting inputs like seeds, nutrients, and time invested into bigger and healthier profits. The systems optimize irrigation, using only the quantity of water that crops need.

It takes a level of investment to get into hydroponics, but the kind of yield increase that it brings about means that growers can pay off their investment within a reasonable amount of time.

A return on investment is estimated within two to six years, depending on the system installed and the crops grown. Poor soil health, soil-borne diseases, soil salinity, and increasing pressures on production continue to hamper the productivity of many soil-based producers.

Hydroponics gives growers more control over their crops’ root zone, which is a very important aspect. Hydroponic systems do not use soil but supply crops’ water and nutrient requirements entirely through a nutrient solution. Production takes place in a protected structure such as a greenhouse, and the systems can be designed to reuse nutrients on the hydroponic crop or on other crops like fruit trees and livestock forage grown in open fields.

Water use efficiency is significantly higher in hydroponics compared with soil-based crops, and some crops grown in hydroponics-layering allows them to be grown longer than in soil. Hydroponic systems attain high levels of efficiency in their utilization of inputs like water, fertilizers, labor, land, and energy.

Compared to soil-based farming, hydroponics does not need extra work such as hoeing, weeding, and watering. High-quality vegetables are produced within a limited space, with minimum protection needed from pests and diseases. Pesticides are not used, so there is no risk of toxic residues in produce.

Planting can be done at any time of the year, provided the weather is warm enough. The system also has the potential to attain yields of up to 100 percent more than open-field cultivation.

A unit of the Institute for Climate Change and Environmental Management (ICCEM) of the Central Luzon State University (CLSU) in the Science City of Muñoz in Nueva Ecija Province is making it easy for agri-entrepreneurs who want to venture in producing high-value vegetables, honeydew melons, strawberries, and culinary herbs through hydroponics or aquaponics growing systems.

The CLSU Hydroponics and Aquaponics Technologies (CHAT) headed by associate professor Chito F. Sace, a Ph.D. in Agricultural Engineering, maintains an 8,000-square meter facility that serves as a research and techno-demo training center and supplier of hydroponics growing system modules for agri-investors.

Sace is project leader of ICCEM’s Hydroponic System as Smart Farming Technique for Vegetable Crop Production. The project started in 2013 with a Php6.32 million fund from the Department of Science and Technology’s Philippine Council for Agriculture, Forestry and Natural Resources Research and Development (DOST-PCARRD). For January 2015 to June 2016, the Taiwan Agricultural Research Institute in collaboration with the PCARRD provided PhP 4.2 million for the project to continue.

Protected hydroponics growing system modules displayed at the CHAT center are of three types: household, backyard, and commercial. According to Sace, the household module is 3.5 meters (m) by 4.0 m with the capacity to grow 560 lettuce plants per cropping and provide a potential gross income of about Php48,000 per year. Its total cost, including the rain shelter structure and the needed nutrient solutions for the lettuce, is Php50,000, and its payback period is 2.09 years.

“The nutrient solution is at the heart of the hydroponics system,” says Sace. “It determines the success or failure of a hydroponics operation. We had to devote much of our time and effort in research to come up with efficacious nutrient solutions initially for lettuce, cherry tomato, cucumber, bell pepper, celery, honeydew melon, and leafy greens like pechay, spinach, and amaranth.”

The backyard module measures 4.0 m by 8.0 m and costs Php100,000, including the rain shelter and nutrient solutions, while the commercial module, which costs Php350,000, is 3.5 m high, 8.0 m wide, and 16 m long. Entrepreneurs who want to have more space can have the protective structure’s length extended.

“Our commercial module’s protective structure will last for up to 30 years,” says Sace. “It can accommodate six rows of 72 plants or a total of 432 plants per cropping, using what we call the gravel culture in growing the plants. The culture involves 26-centimeter (cm) wide and 15-cm deep troughs or canals about the length of the protective structure. The troughs are half-filled with gravel, which serves to oxygenate the nutrient solution as it circulates, aerating the roots of the plants which are in small plastic cups filled with carbonized rice hull and coco coir. The bottoms of the cups placed in holes at the center of discarded styropor covers rest on the gravel on which the roots spread.”

The unit’s trials with a cherry tomato variety supplied by Allied Botanical Corporation showed that when transplanted 14 days after sowing, the plants began fruiting seven weeks after transplanting to give a total yield of 415 kilograms of fruit. If sold at R150 per kilo, a gross income of more than Php60,000 per cropping or over Php182,000 per year with three croppings is achievable. The annual total production cost is less than R100,000, with a fixed cost of Php25,600 and variable cost of Php73,800.

“Agri-entrepreneurs from this province, Bulacan, Pampanga, and Tarlac have bought units of our commercial module,” says Sace. “We visit their farms whenever the opportunity arises, as we also do extension work. We also sell for 10,000 pesos each a prototype or laboratory module to agricultural and national high schools for instructional purposes.”

Basic Guide for Would-Be Swine Raisers in the Philippines, Part 3