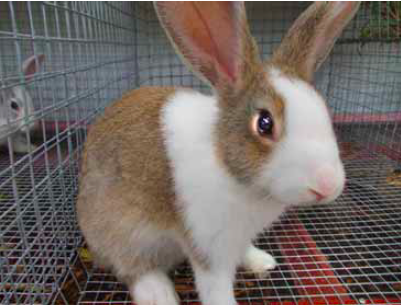 Cages for each rabbit must be allocated when they reach four months of age to avoid fighting and possible injuries or even death, as they start to be sexually mature at this age.

Rabbit Farming, Part 2: An Overview of the Philippine Rabbit Industry

In the second part of our previous piece on raising rabbits for profit, we would like to share valuable information about rabbit farming as a way to raise interest in and awareness of the development of the rabbit farming industry.

By Art and Angie Veneracion

At the onset, the producer must determine his or her purpose in raising rabbits and identify the potential market for the rabbits. Doing so will make it easy for the producer to select the rabbit breed to be raised on the farm. We shall focus on rabbits raised for meat here.

Factors to consider when purchasing foundation stock include the following:

If one is raising rabbits for meat, choose medium rabbit breeds that will produce fast growing offspring and which have a good meat to bone ratio. Just because a rabbit is of a large breed, this doesn’t necessarily mean they are better for meat because these breeds do not efficiently convert food into meat. They have very large bones and therefore a large portion of feeds consumed do not go towards meat conversion.

A healthy and shiny coat, good and quick feed intake, bright eyes without any discharge, good body weight gain, and a very active disposition are the physical indications of a healthy rabbit.

A good foundation stock can make a difference in production. Initial stock must be purchased from a reputable rabbit grower/breeder that has a good recording system. This means the breeder has a recording system that accurately shows the age of the rabbits, and can assure that the doe and buck have different parents. It is important to study records on family productivity, hereditary factors, growth potential, and size of the animals.

Start your rabbit farm on a small scale while learning the basics. A good way to start small is by getting two bucks and ten does.

The most popular breed of rabbit for meat production is the New Zealand White. This rabbit breed was originally developed in 1916 by W.S. Preshaw for meat and fur production. This breed features a well-rounded body, small bone structure, and pink eyes. They produce large litters of 8 to 12 kits, with a fast growth rate to fryer size in 2 to 3 months.

Because of these excellent characteristics, many hybrid rabbits use New Zealand White as foundation stock. Rabbit breeds that are generally good meat rabbits have large loins and are rapid growers. Following are examples of these breeds:

Although rabbits require little space, we should nonetheless provide them with adequate facilities and an ideal environment. A clean, dirt- and smoke-free environment with ample light and proper ventilation are essential to rabbits’ healthy living conditions. Rabbits can tolerate variations in temperature but adequate measures should be taken to reduce heat stress during summer.

Rabbit houses may be built around shady trees that can provide a canopy during the summer and a shield during the rainy season.

As a general practice, noise should be avoided since it may have detrimental effects on the health of rabbits and may interfere with their breeding and maternal instincts. The rabbitry should always be quiet and kept free of predators.

Rabbits have their own language. This guide can help you interpret what they are “saying”:

• Sniffing – may be annoyed, or they may just be “talking” to you.
• Grunts – usually means they are angry; watch out!
• Shrill scream – hurt or dying
• Spraying – marking its territory
• Chinning – they rub their chin on items to indicate that these belong to them since their chin contains scent glands
• Hopping around, or the “Bunny Hop Dance” – a sign of happiness
• Territory droppings – droppings that are not in a pile but are scattered. This often occurs when they enter a new environment, and means they are claiming ownership of the territory
• Playing – rabbits like to push or toss objects around
• Stomping – frightened, mad, or trying to warn you that there is danger. Rabbits are extremely nervous.
• Teeth grinding – Indicates contentment; loud grinding, however, can indicate pain.

Cages for each rabbit must be allocated when they reach four months of age to avoid fighting and possible injuries or even death, as they start to be sexually mature at this age.

Rabbits are creatures of habit and when they get things right, they want things to remain that way. Rabbits are often displeased when you rearrange their cage as you clean.

Rabbits are extremely territorial. Territorial behavior includes depositing marking pellets at the boundaries of their territory, chinning, urinating, and aggressive behavior such as digging, circling, and fighting.

Be sure to allocate cages for each rabbit when they reach four months, as this is when they start to be sexually mature. This will help you prevent fighting and possible injuries or even death.