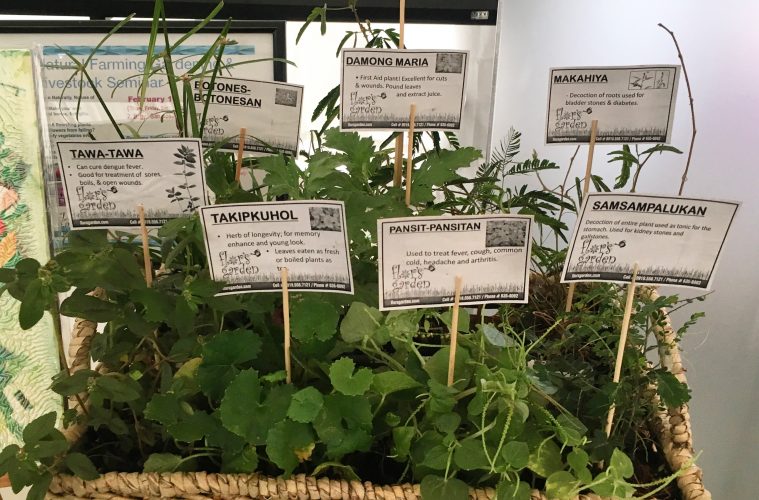 Rediscovering the Medicine Chest in Your Garden

The Philippines has a long history of herbalism—using plants to cure illnesses. And while modern medicine has taken over in terms of healthcare, there are still people who rely on their garden to soothe minor—and sometimes life-threatening—ailments.

Flor Tarriela leads two lives: she is a stalwart of the finance industry, currently serving as Chairperson of the Philippine National Bank (PNB). She is also a passionate and successful farmer, whose educational farm, Flor’s Garden in Antipolo, has been instrumental in spreading the word on the health and medicinal properties of common Philippine plants, many of which are nowadays, sadly, considered weeds.

Flor Tarriela believes that many common Philippine plants can be used as sources of nutrition and healing.

“A weed is a plant that you don’t want in your garden,” Tarriela said in her talk on ‘Weedibles and Weedicine’ in Hortikultura 2018. It’s basically “a plant in the wrong place.”

Tarriela has coined two terms to describe the formerly unwanted plants that grow in her garden: weedibles—edible weeds packed with nutrients, and weedicine—weeds that have medicinal uses.

Her interest in using indigenous plants as food and medicine started when she found that the common weed talinum, or Japanese ginseng, saved a lot of people from starvation during World War II. The herb is rich in Vitamin C. It can be eaten fresh, and is delicious when included in munggo.

She lists other local weeds that have medicinal properties:

Pancit-pancitan (Peperomia pellucida) can help regulate gout, high blood, and arthritis. It can be eaten fresh. As a medicinal plant, it can be taken daily for two weeks, with a break for two weeks after.

Samsampalucan (Phyllantus niruri), which can be eaten raw or be drunk as a tea, is good for stabilizing loose bowel movement. It can be drunk three times a day for three months to remove internal scarring in the liver brought on by hepatitis.

There’s an old wives tale that says that placing makahiya (Mimosa pudica) underneath a child’s pillow at night reduces hyperactivity.

Tarriela called damong Maria (Artemisia vulgaris) the ‘first aid plant.’ The leaves can be washed and pounded (to extract the juice), and used as a poultice for shallow cuts and wounds.

Botones-botonesan, or simply Botonesan (Hyptis capitata/ Pycnanthemum decurrens/ Thymus virginicus), like the more popular tawa-tawa (Grammatophyllum scriptum), can be boiled and drank as tea to combat dengue. Tarriela added that dogs tended to eat this when they are unwell.

These are but some of the weedicines that can be found in Flor’s Garden. Of course, since they’re intentionally grown, they aren’t weeds anymore!

Agriculture Never Goes Out of Style

Tarriela places great faith in cultivating plants and herbs. “I realized that gardening is against poverty,” she said. “It’s also against climate change and global warming.”

She hopes that more people will be convinced to take up farming. “In other countries, farmers are rich!” she exclaims, adding that “we need to change farmers’ mindsets to ‘madaming pwedeng gawin at ipagbibili.’” (There can be many things to cultivate and sell).

No matter how advanced technology gets, people will always have to go back to nature. As Tarriela discovered, knowing how to plant—and what to plant—can mean that one rarely gets sick and never goes hungry.