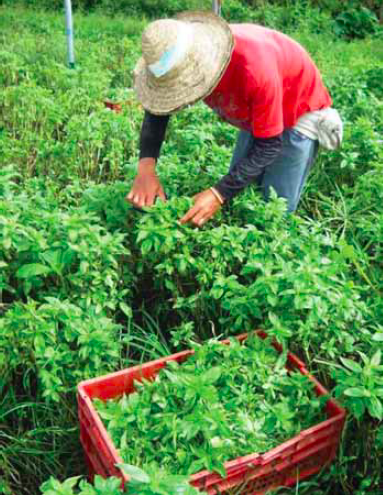 A primer on using EM (effective microorganisms) to make your own organic fertilizer.

I learned from a recent workshop at the EM Kyusei Nature Farming Center in Saraburi, Thailand, about how kitchen wastes are fermented for one week then applied below garden plots for vegetables with the use of an EM (effective microorganism)-activated solution (EMAS) and bokashi(fermented organic matter) to improve soil quality and enhance soil fertility in three weeks.

When we were doing field practice, I realized how many opportunities we have lost back home by throwing away these biodegradable wastes. My second workshop at Kyuseifirmed my firm resolve to educate our farmers on how to apply this simple agronomic technology developed by Dr. TeruoHiga of Japan in the 1970s which is now used widely throughout Asia—particularly Thailand, Vietnam, Indonesia, Korea, Malaysia, Singapore, and Myanmar—in addition to Japan and in Europe, the Middle East, and the Americas.

We shall focus on the magic of EM and how these minutest of farmers’ friends can establish and sustain healthy soil for our crops. Modern agriculture has indeed gone a long way in understanding the soil and how we should care for it to produce quality vegetables, herbs, fruits, root crops, and ornamentals.

Who are These Minute Farmers’ Friends?

The principal micro-organisms in EM are:

• Phototrophic bacteria: Also known as photosynthetic bacteria, these are an ancient type of organism that has been in existence from the time the Earth achieved its present concentration of oxygen. They utilize solar energy to metabolize organic and inorganic substances.

They have the ability to decompose organic materials like farm wastes and wastewater. The breakdown of organic wastes into compost has wide applications in agriculture, converting manure into fertilizers, conditioning fishpond water by breaking down excess feed and dead fish into amino acids and recycling biodegradable community and industrial wastes.

Phototropic bacteria are involved in various metabolic systems, and play a major role in nitrogen cycling and carbon cycling. This role allows the other microorganisms in EM to co-exist. It is thus an essential element in EM-1.

• Lactic acid bacteria: This converts large amounts of sugars into lactic acid through fermentation. Through the production of lactic acid, these bacteria also inhibit the growth of pathogenic and other various harmful microorganisms by lowering the pH.

Lactic acid bacteria are widely used in the production of fermented food such as cheese and yogurt, which are naturally preserved for a long period of time. Since Louis Pasteur discovered lactic acid bacteria in 1857, it has been noted for its beneficial effects on health and longevity.

• Yeast: Due to its popularity as a fermentation starter, yeast is a microorganism necessary for the brewing of alcohol and making bread.Yeast was discovered by the Dutch merchant Antony Van Leeuwenhoek (1632-1723), who first identified the world of microorganisms. Taxonomically, yeast is a eukaryote. It differs from fungi in that it generally is unicellular throughout its life. Within the microbial world, it is a small group of microorganisms, yet it is essential to human life.

Yeast lives in sugar-rich environments such as in nectar and the surface of fruits.In EM-1, yeast produces many biologically active agents such as amino acids and polysaccharides.

Photosynthetic bacteria support the activities of other microorganisms in EM. However, they also utilize substances produced by the other microbes. This phenomenon is termed “co-existence and co-prosperity” by Dr. Higa to refer to their inter-relationship.

EM applied to soil will increase the population of beneficial microbes, thereby enhancing its beneficial effect on the soil by suppressing the harmful effect of pathogens. This reduces microbe-induced diseases that cause soil-borne diseases.

Furthermore, in EM-conditioned soil, root hair growth is multiplied significantly through a symbiotic process. The plant roots secrete substances such as carbohydrates, amino and organic acids, as well as active enzymes.Microbes use these secretions for growth. During this process, they also secrete and provide amino and nucleic acids, a variety of vitamins and hormones to plants. EM in the rhizospherecoexist with plants. Therefore, plants grow exceptionally well in soils which are dominated by microorganisms promoted by EM.

Long before the excitement over natural farming technology’s introduction to the Philippines, the Chinese and Japanese had, for centuries, been regularly applying compost to their farm lots in every crop cycle. The introduction of agro-chemicals to enhance productivity at first provided new hope for farmers to make a good income from increased yield.

It was only years later, after the constant use of these modern inputs, that farmers realized their soil was slowly dying and could no longer support the healthy growth of plants. The soil had become too acidic due to the prolonged use of chemical fertilizers, and toxic residues killed most of the beneficial microbes in the soil that enhanced the presence of organic matter composition in soil to sustain life.

The application of EM to regenerate “dead soil” together with large quantity of compost takes time. It depends on how firm the farmer’s resolve is to consistently and willingly recondition his or her soil by applying this technology. As a corrective measure, it has a standard procedure that should be learned properly. A farmer should have patience and diligence to reap the benefits of EM technology. They have to ‘EMpower’ themselves through an education process and daily practice.

EM Reduces the Cost of Farming Over Time

The use of EM solution in soil remediation is the most effective and economical way. Initially, a farmer would have to use EM mixed in irrigation water, spray EM as a foliar application, and add EM bokashi to enhance the soil several times throughout the cropping season.

As the organic matter composition in the soil reaches equilibrium, one may only have to add EM bokashi-treated organic matter to the soil along with post-harvest residues soon after harvest. This could be followed with an application of EMAS.Once the soil begins to “breathe” again, the farmer will see a great improvement in plant growth and the quality of produce, with significant savings on inputs.

It may take a year to see good results from the initial application.The sustained use of EM and compost will give a long-term economic benefit to the farmer by regaining the health of the soil.

Now, we shall see and feel the benefits of EM Technology by learning how to multiply the mother solution of EM-1 concentrate 30 times, and how to make your own bokashi using rice bran and rice hull with chicken manure. You will also learn how to make your own pesticide using vinegar from tuba and lambanog, and fungicide with vermi tea and EM.

This article was prepared by the Harbest Organix Department of Harbest Agribusiness Corporation, with its major reference being the EM Training Manual 2011 Edition published by the EM Kyusei Natural Farming Center, Saraburi, Thailand. Write us for guidance and a free consultation. You can reach us at the numbers given above and harbestorganix@yahoo.com.ph or harbest@harbest.com.ph. You can also visit our blog online at www.harbest-agri.blogspot.com.

This appeared as “Healthy Soil for Healthy Plants and Healthy Farmers” without a byline in Agriculture Monthly’s September 2015 issue.