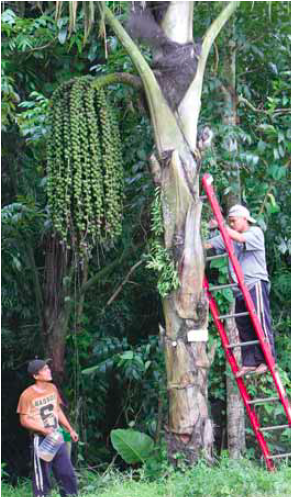 Kaong (Arenga pinnata) is a medium-sized palm growing up to 20 meters (m) tall. Called ‘sugar palm’ in English, it is native to tropical Asia, from eastern India to Malaysia, Indonesia, and the Philippines. Also called irok in other Southern Tagalog provinces, this solitary palm with a dark fibrous bark that wraps around its trunk thrives best in places straddling between 300 to 1,000 m above sea level.

Indang, a first class municipality that is centrally located in the highlands of Cavite, is tagged as the “kaong capital of the Philippines” because of the countless kaong trees that thrive along its waterways. This rustic university town with a population of 70,000 is home to the 72-hectare main campus of the 109-year-old Cavite State University. Its 17,000 students, many coming from other towns in the province, add to the town inhabitants’ numbers during weekdays.

Indang—with a lofty 380 m (1,247 feet) elevation with a lush rolling terrain bisected by numerous creeks and streams that are fed by over 80 springs—is the ideal place for kaong trees to flourish along its tributaries.

Palm sugar is produced by tapping the sap (tuba) from the inflorescence (a cluster of flowers arranged on a stem that is composed of a main branch) of the tree and boiling it to produce a thick syrup. This is allowed to crystallize into native sugar cakes (pakaskas ) then pounded with a wooden mallet to become ground brown sugar.

“Since the colonial days, Indang has been producing the much sought-after sukang irok (vinegar) from kaong,” says Arturo C. Erana, an agriculture engineer who is the officer-in-charge of Cavite State University’s (CvSU) Sugar Palm Research, Information and Trade (SPRINT) Center.

“The Center, which was officially established in 2011, seeks to develop a sustainable, equitable, and environment-friendly sugar palm industry in Indang and nearby communities for the improvement of the quality of life of its residents, and more importantly, for the maintenance of ecological balance in the town’s riparian (situated on the banks of a river) ecosystem.”

The deep-rooted kaong trees along Indang’s riverbanks and in other nearby upland towns in Cavite augments the stability of the soil by protecting it against the scouring effect of floodwaters rushing downstream after heavy rains. What’s more, the prevalence of kaong trees facilitates the steady supply of water from Indang’s 87 springs that sustains its rivers and streams.

Aside from keeping the town’s numerous waterways flowing with pure, spring water that gushes down from its dense kaong-hemmed watersheds, people in town and at CvSU now are thinking of making the most of kaong’s sweet potential for the production of brown sugar. According to a test conducted by the Food and Nutrition Research Institute (FNRI), kaong brown sugar has a low glycemic index, making it safe and healthy for consumption by persons with diabetes.

“Once I have tapped ten liters of kaong sap, I mix it with one kilo of sugar and cook it in a cauldron,” explains Joel Astudillo, 39, a BS Agriculture degree holder and a kaong sugar expert who handles SPRINT’s kaong nursery. “When it boils and turns syrupy after three hours of boiling, I determine its degree of sweetness with a Brix thermometer which measures if syrup is light, medium, or heavy. It’s the heavy sweet syrup that I convert into sugar, which I stir continuously until it bubbles and crystallizes over low fire.”

“When it hardens like pakaskas, I manually pound it with a wooden sandok (ladle) until it is reduced into granules,” says Astudillo, who makes kaong sugar at SPRINT for demonstration purposes. “Kaong sugar makers in town sell a 200-gram jar of sugar for Php100. Marketing and distribution of the product is now easy because a dealer from Manila comes here and provides sugar makers with jars and labels to make it more attractive on the shelves of supermarkets in the city.”

The downside of Indang’s sweetening kaong sugar industry though is that some kaong trees reach sexual maturity only on their sixteenth year. This is when one can tap its sap. At present, the only source of kaong tuba are the existing trees that grow wild along the banks of the town’s numerous waterways. This means that kaong saplings planted last year will become productive only in 2031! The upside, on the other hand, is that due to Indang’s abundance of water, many kaong plants there have been observed to begin their reproductive stage as early as their eighth year.

“In 2007, we planted 60,000 kaong seedlings during the rainy season,” says Bienvenido V. Dimero, the town’s amiable chief executive, who is a staunch environmentalist and kaong propagation advocate. “The problem was that charcoal makers and some kaingeros (slash-and-burn farmers) denuded parts of our forest, felling old kaong trees in the process, thus depleting further whatever was left of natural grown kaong trees.”

“The rapid loss of coffee plantations in town due to their planters’ shift to other cash crops also resulted in the decrease of our palm civet (alamid) population, which lived on the canopies of kaong trees and subsisted on ripe coffee berries and kaong fruits,” says Dimero, who is a mechanical engineer by profession. The backyard of his modest residence in town is planted to fruit trees. “The kape alamid (palm civet coffee) is made from droppings of this nocturnal mammal. This coffee is the most expensive in the world and it is described to have a chocolate and hazelnut aroma and taste.”

“That’s why we have passed a municipal ordinance prohibiting the hunting and capturing as pets of three of our wildlife species known to be kaong seed dispensers, namely alamid or palm civet (Paradoxorus philippenensis ); the slender-tailed cloud rat (Phloeomys cumingi ), one of the six species in the country found in Southern Luzon; and musang (Vivera tangalunga ). Their populations have been adversely affected by deforestation.”

These gentle mammals ingest the seeds of kaong, which are then excreted in their feces; once these drop on the ground, they germinate. This phenomenon contributes to the natural regeneration of kaong.

“Existing kaong groves should be conserved by prohibiting indiscriminate harvesting of their leaves (for roofing) and felling and burning of entire plants (for charcoal),” states CvSU president Divinia C. Chavez. “On the part of the government, parallel efforts should be undertaken to aggressively implement research, development, and extension (RDE) programs aimed at conservation and the provision of kaong-based livelihood opportunities.”

Cooperation among government entities, members of the local community, and other stakeholders from the private sector will complete the necessary ingredients for a multi-sectoral collaboration. Certainly, coming together can make a very sweet difference.

The Bank in Your Backyard: Practical Tips on Farm Planning, Part 1