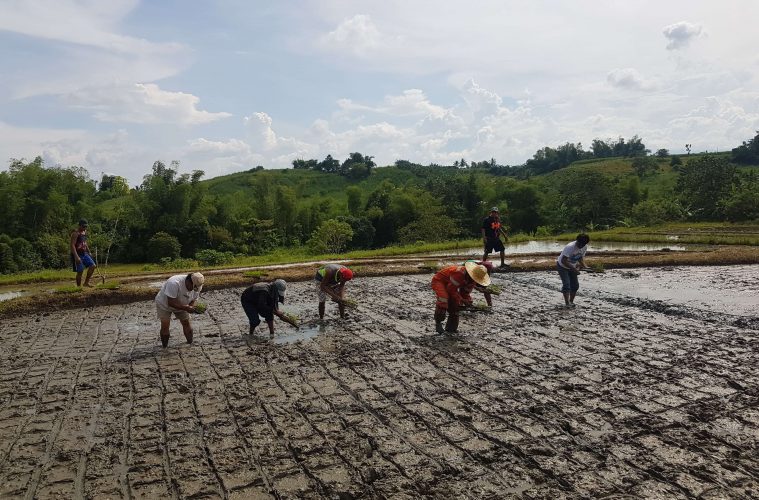 A farmer’s association in Zaraga, Iloilo is making organic farming a viable business for everyone in the community.

Rice is one of the most important crops in the Philippines. After all, very few Filipinos can imagine going a day (or even a meal) without rice. Unfortunately, this staple crop doesn’t always mean monetary rewards for the farmer. This is something that the Zaraga Integrated Diversified Organic Farmers Association (ZIDOFA) wants to change.

The Zarraga Integrated Diversified Organization Farmers Association, is a social enterprise initiated by small farmers. Organized around 2015, ZIDOFA’s main goal is to “attain sustainable economic development” along with the “promotion of climate-friendly agricultural practices which would help mitigate climate change and allow farmers and their crops to adapt to weather patterns.”

Getting into a System of Rice Intensification

This is done through the introduction of System of Rice Intensification [ http://sri.ciifad.cornell.edu/ ] (SRI), an agro-ecological system that aims to boost rice yield and mitigate climate change through proper management of water, soil, plants, and nutrients. Right now, ZIDOFA produces organic pigmented rice for different markets.

Transitioning to organic farming may take time, but the health, environmental, and financial benefits are worth it.

“Conventional farming takes a toll on our small rice farmers, in the sense that the application of inorganic fertilizers and chemicals in the soil depletes soil quality and fertility,” says ZIDOFA Chairman Joby Arandela, who has been practicing SRI since 2012. “There is also the cost of fertilizers and chemicals, or what we call farm inputs, and also that the farm prices of palay being bought by traders has not changed at all since late ’90s.”

These factors led Arandela to organize ZIDOFA. “We figured out a way to make changes in how we cultivate rice, which can elevate the farmer’s social economic welfare as well as produce organic, safe, affordable, and healthy rice for consumers. And at the same time, this is to preserve and protect biodiversity in our farms, specifically the soils. That was our main consideration when we started the project.”

Arandela was a former computer programmer who opted for early retirement to take over the family farm after his father passed away. He credits his coming from a non-agricultural background for his openness to adapting new and different technologies. “I was able to adopt and embrace organic rice cultivation more easily compared to other more experienced farmers, who are dependent on chemicals and fertilizers,” he says.

Getting his fellow farmers to even consider another way of farming wasn’t easy. “One of the most difficult challenges in the project was changing the minds and the culture of the interesting farmers who have been used to chemicals and fertilizers,” Arandela says. “There is also no definitive government policy supporting organic rice cultivation. We have been doing this for at least three years now, yet we still could not find a program in the department of agriculture which will give us a full support. So I think changing policy would be very helpful.”

He adds that lack of funding is also a problem. “We don’t have an NGO behind us either, so it’s just us small farmers figuring out how to tackle these obstacles.”

Slowly, minds began to change. “We didn’t have funds for training, recruitment, or promotion, so we set-up a core group of farmers who are already passionate about organic agriculture. I think that is one of the key steps up to this point,” Arandela says. “Instead of forcing the technology onto people, we choose people who have already been practicing organic farming and those who were interested and committed to learn it.”

Help from the Government and Beyond

The organization drummed up interest in its projects by showcasing it to different government agencies such as the Department of Science and Technology (DOST), Department of Trade and Industry (DTI), and the Philippine Center for Postharvest Development and Mechanization (Philmech), all of which have been very supportive of ZIDOFA and its projects.

ZIDOFA also managed to garner support from international organizations dedicated to sourcing and supporting sustainable, ecologically sound agricultural initiatives. Arandela declines to name names, but mentions an “organization in California which is a number one exporter/importer of organic rice from Asia, a brand that specializes in organic superfoods, and a leading brand in organic health products.”

“It’s all these organizations that are inclined toward environmental protection who have been able to see and appreciate what we are doing for the environment,” he says.

The one name he does mention is ZIDOFA winning a BPI Sinag Award in 2016. The program offers qualifying social enterprises access to grants, bootcamps, mentoring, networks, and potential investors. Arandela says that the program helped him and his co-members learn how to better run their social enterprise. “It’s a clear validation of that we were on the right track.”

Post-processing is an important part of getting the farm products to market because it helps ensure quality and minimize spoilage.

The Transition to Organic

One of the biggest challenges in switching to organic farming is conditioning the soil to replace its nutrients without using fertilizers, a process which takes time. “Part of the strategy is to incorporate organic fertilizer production in the form of bokashi, and another natural farming concoctions, which are molasses based,” Arandela explains. “That way, we will be able to compensate for the nine years of synthetic fertilizer use.”

Arandel adds that there are two major factors that can determine a farmer’s success: the farmer’s mastery of SRI protocols, and soil fertility. “If your soil has been depleted of nutrients due to series of chemicals and synthetic fertilizers, then it might take probably two or three grafting cycles before you can see results. But if the soil is not considerably depleted, then you can actually equal, if not exceed your previous year’s harvest from conventional chemical rice farming.”

This is usually one of the biggest hurdles to getting a farmer to go organic—the time lost waiting for the soil to recover means money lost—but it is always worth it. The easiest way to convince farmers to take up organic farming is when they see the quality and quantity of crops that their organic farming peers harvest, as well as the profit that they can bring in because of high market demand. This was the case with ZIDOFA as well. “That was a wake-up call for the farmers in their respective communities,”Arandel says. “And it not only caught the attention of the farmers, but also of the government as well.”

Some of the products produced by ZIDOFA’s farmers. Packaging and marketing is important, especially when targeting the higher end of the market.

A Good Problem to Have

Because ZIDOFA’s members farmed a total of 40 hectares, it became easier for the organization to ask for grants and funds. This led to a different challenge: with so many farmers growing organic pigmented rice, how could the organization make sure that everyone made money? Training the farmers wasn’t enough. “This project has to be a more holistic one, meaning we needed to work on post-harvest,” Arandela says.

This includes harvesting, drying, and storing the rice, as well as packaging, labeling, marketing, and advocacy. “We need to raise public awareness on organic pigmented rice so that, they’ll be able to appreciate not only its health benefits, but also its environmental benefits. They also help the farming communities.”

Seeing ZIDOFA members succeed in organic farming has encouraged other farmers in the area to join the organization.

ZIDOFA’s successes has encouraged its members to push for more opportunities. “The target of the project was to create an organic rice group that would empower the farmers by giving them control of their harvest and selling prices. We are already doing that and now, I think it’s more of identifying areas where we can get more efficient, effective, and to have more savings,” Arandel says. He adds that in the long run, he hopes that the farmers will, as Arandel says, “be able to operate this social enterprise on their own while maintaining our current standard of quality so that we can remain competitive not only in our region but also in the nation.”