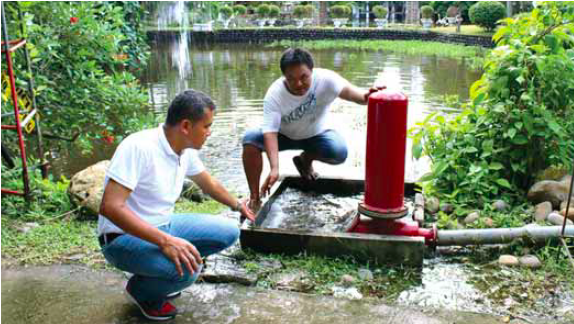 For more than 20 years, the farmer-families of Sitio Candalaba in Barangay Cabacungan, La Castellana, Negros Occidental had no other recourse but to fetch water for their needs from a natural spring which was more than two kilometers from their respective houses.

To fetch water may be a routine chore among people in other areas in the country, but the villagers of Candalaba and the adjacent Sitio Balucanag have to navigate a treacherous mountain trail with slippery boulders from Kanlaon Volcano and thick vegetation.

For over two decades, the villagers of Candalaba had to take a long, difficult trek over two kilometers from their homes just to fetch water for their daily
needs. It was especially hard on the elderly, women, and children.

But with the installation of two hydraulic ram pumps, things changed for the better. Now, they no longer have to endure the burden of having to carry containers of water on a difficult and dangerous trail spanning over two kilometers. The water project for Sitio Candalaba was realized under the Sagana at Ligtas na Tubig Para sa Lahat or SALINTUBIG program of the Department of the Interior and Local Government (DILG).

The ram pump was developed by the Ecological and Agricultural Development Foundation, Inc. (EcoAgri) and RU Foundry and Machine Shop Corporation in Bacolod City, owned by Ramon Uy.

According to Uy, the hydraulic ram pump model developed by EcoAgri and RU Foundry and Machine Shop Corporation, with the help of Engineer Dominador Clavejo, a provincial technical director at the regional office of the Department of Science and Technology (DOST), uses the force of water running downhill through a drive pipe in order to pump water uphill that is much higher than its source.

The ram pump project, which has a community reservoir, was able to supply the water needs of the Candalaba community, which is composed of about 115 families or more than 600 individuals.

The water surplus from the ram pump also irrigated the organic rice farms at the sitio, and the villagers were able to maintain a community pond that is now abundant with tilapia that can be harvested for food.

Water outlets were installed in areas that are accessible to the villagers, and Uy said the availability of water has improved health, sanitation, and hygiene in the community.

This is the community fishpond at the sitio where the villagers can get fresh tilapia for their consumption.

Water contamination has been avoided, and the villagers have started to construct toilets to properly dispose of human waste.

In order to ensure the sustainability of the project, the villagers formed the Candalaba-Lower Balucanag Water Consumer Association that is presently headed by Danilo Gelacio. It collects a modest amount for the maintenance of the ram pumps.

Aser Gelido, a farmer in the community who was trained by the RU Foundry and Machine Shop Corporation as a technician, is responsible for maintaining the smooth operations of the ram pumps. These have remained in tiptop condition after a year-and-a-half of supplying the water needs of the villagers.

Since the pumps remained trouble-free for that period, the association was able to accumulate more than PhP20,000 in savings, which they intend to use as capital for other livelihood projects.

For his part, EcoAgri executive director Aladino Moraca, or “Nonoy,” as he is fondly called, said household incomes in the community increased by at least 30 percent with the creation and/or expansion of various agricultural and livelihood activities.

The surplus water coming from the two pumps is diverted to the ricefields in Candalaba, providing much-needed irrigation for the growing of organic black rice.

Freed from the need to fetch water from a distant and difficult-to-reach source, the women and children are now able to contribute more to livelihood activities. With the pumps, the families now hope to provide a better future for their children.

Incidentally, the RU Foundry and Machine Shop Corporation fabricates different models of shredders which are used to produce organic fertilizers through vermiculture.

Aside from shredders, Uy also manufactures many other kinds of farm equipment and machines, like a hammer mill that crushes waste glass materials for construction use, a rock crusher that breaks stones and pebbles to the required construction sizes, a rice thresher, an essential oil distiller, and a biogas system.

An organic farming advocate, Uy established EcoAgri in 2008; it is very active in teaching farmers to produce their own organic fertilizer.

These days, the farmer-families of Candalaba just wait for their turn to draw water from a faucet that is connected to a community reservoir supplied by the ram pumps.

Through EcoAgri, the farmers are also provided with marketing support so that they don’t have to worry about selling their harvests; the foundation has vowed to buy all the organic rice produced by its farmer-cooperators.

The advocacy of Ramon Uy is worth replicating in many areas of the country where it is needed most.