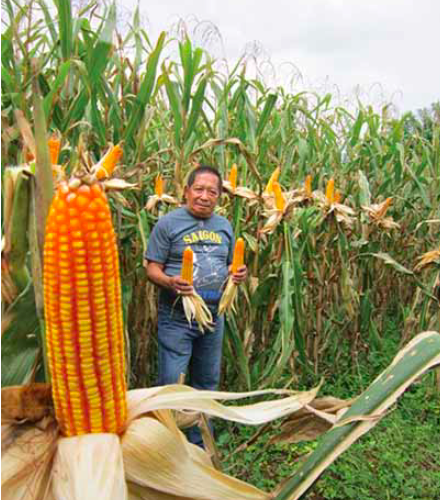 We still need to be very mindful of the return on investment, just like with any other business, because knowing the optimum level of inputs needed to achieve optimum output in production is very important for farming to succeed and be sustainable.

Alfredo Yao, a farmer in Wao, Lanao Del Sur, is an organic farming advocate. He believes that in farming, we need to find ways to lessen input expenses without sacrificing production. When his radio commentator friends Rene Centillas and Ronie de Asis mentioned that they were endorsing an organic fertilizer made from fish hydrolysate called “Amino Plus Foliar Fertilizer,” Yao, an organic farming advocate, tried it the product.

As a promoter of Amino Plus Foliar fertilizer, I was a little bit worried at first that the corn plants might not bear good ears or that it might only result in poor grain filling or at worst, barren ears because the level of reduction in the amount of fertilizer used was too huge, considering that most of the farmers were using 12 to 14 sacks of inorganic fertilizers. However, when I looked at the leaf color, based on the Leaf Color Chart (LCC), there were no symptoms of nutrient deficiency whatsoever. But still, I was a little bit concerned about it.

I told Ricky Sun, inventor of Amino Plus Foliar fertilizer, about my apprehensions, and he had the same worries. Even the other field technicians in the agriculture industry could hardly believe that Yao only used low levels of input.

Thereafter, Yao used Amino Plus Foliar Fertilizer with his newly planted corn at 2-3 leaves at 150 milliliters (mL) per 16 liters (L) of water, the mixture of which was sprayed in furrows lining the small plot and the soil along the furrow.

He then applied 37 bags of inorganic fertilizer (at 4.9 sacks per hectare) then conducted an off-barring operation to remove weeds from the plants. Yao’s corn plants then grew even faster.

After 35 days, he sprayed another round of Amino Plus at the rate of 80 mL per 16 L water. He thus used a total of 15 L of Amino Plus Foliar fertilizer for his 7.5 hectares of corn. Yao used Pioneer Hybrid 3645YR corn seeds, as it is the most commonly used hybrid in the area.

Currently, farmers who normally use 12 to 14 sacks of inorganic fertilizer complain that this hybrid has a poor tip-filling problem. This is a condition in corn wherein the bigger portion of the tip of its ear is poorly filled or worse, has no grains in it.

Then harvest time came. Contrary to our apprehensions and the expectations of the farmers who had experienced various problems earlier, Yao’s corn produce had bigger ears and the whole cobs were filled with grains, even the topmost part. Also, at 115 days after planting, the leaves of the corn plants were still green at a time when most corn leaves would have already turned yellow and dried up. This meant that there was still photosynthetic activity in the plant, thus resulting in the development of more quality grains.

Sun explained that when Yao used Amino Plus Foliar Fertilizer at the 2 to 3 leaf stage of the corn plant—spraying the entire plant, including the surrounding soil—the soil nutrients which were once unavailable (because these were locked away due to acidity and complications with other elements in the soil) were made available to the plant through the enzymes and the micronutrients present in Amino Plus. In addition, the presence of microorganisms such as the nitrogen fixing bacteria helped in the activation of the nutrients.