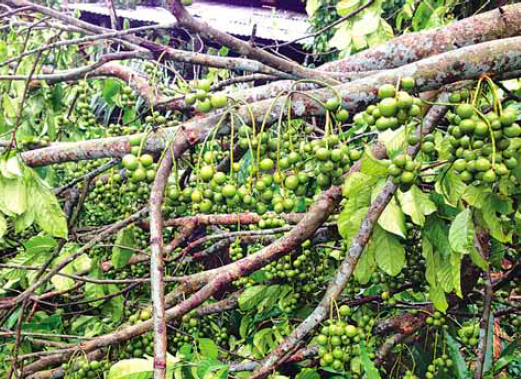 In 2013, after experiencing the initial success of the new lanzones-growing technology that it had been developing and perfecting since 2008, a company began reaping the fruits of its endeavors in the farms of the group and the first clients who had availed themselves of its services.

The technology enabled their lanzones and rambutan trees to start flowering in May, so farmgate prices were high when fruits were harvested in July. What’s more, their yields increased by 20 to 25 percent. The orchard owners continued their technology applications and eagerly looked forward to their next season.

But Mother Nature intervened, and in July 2014, a category five super typhoon, Glenda (international name ‘Ramasum’), barreled in from the Paciic Ocean with 185 kilometer-per-hour winds, battering the Bicol region and the southern Tagalog provinces. It caused considerable damage and several deaths in Metro Manila before exiting to the West Philippine Sea via the provinces of Bataan and Zambales.

“I lost 35 of my best, most prolific lanzones trees to the typhoon,” said Bio-AgriTech Inc. (BATI) president and general manager Ruel Reyes of San Pablo City. Despite the setback, this dentist was still committed to remaining in agribusiness, and so, “I took a long look at the broken and fallen tree trunks and realized something significant
that we had achieved. Nearly all the trees’ fruits were still strongly attached to the branches because of our technology. And in early August 2015, the trees of BATI and its clients were with fruit again, although (they were) not as fruitful (as they were) before Glenda. No other trees in all of San Pablo had begun flowering. Nature favors those who trust in its ways.”

Nature guided Reyes and a few close friends from the Bureau of Plant Industry and the University of the Philippines Los Baños College of Agriculture in forming their venture and carrying out its objectives. With the guidance of consultants, they began experimenting on ways to rehabilitate and recondition the soil, initially in Reyes’ own two-hectare home lot (with 220 trees, it served as their group’s techno-demo center) and later, in other orchards whose owners became interested in their advocacy.

Several years of careful observation, experimentation and testing led the friends to a solution based on organic farming principles which they believed would offset the variables that negatively impact lanzones fruiting. They found that, as soil scientists had previously asserted, the natural plant microbial biodiversity of the soil ecosystem had been severely damaged after years of indiscriminate use of commercial fertilizers, pesticides, and fungicides.

Ruel Reyes poses with another fast-recovered tree in his farm.

Also, both natural degradation and that caused by humans also contributed to the damage. Thus, they realized that the real problem of San Pablo’s lanzones industry was decades of extracting nutrients from the soil without adequately replenishing the same.

The main challenge was to restore the optimum soil conditions that served as the foundation for the growth of healthy fruit trees; they hoped to achieve this by adopting the organic farming approach of providing just the right process to rehabilitate the soil and attain a high level of fruit tree vigor.

“Five years of careful experimentations and pilot testing using proprietary systems developed by BATI demonstrated that the young and old lanzones trees in our group’s pilot farms responded to intervention through nutrient management,” said Reyes. “Some 200 native trees in my farm began flowering and fruiting profusely, including the five-year old Longkong and Duku trees that I planted when we started our experiments in earnest. Most of the trees’ trunks bore fruit (at levels) as low as…my knees, which our consultants say is really exceptional. And the fruits were much bigger than what we used to harvest in the past,” he added.

After fine-tuning and eventually commercializing their solution, the group formed BATI. Their breakthrough was achieved by first developing a compost product that is critical for soil amendment. The soil supplement called “Compostar” is based on a formula of organic materials, mostly well-dried chicken dung, farm wastes and crop residues that will provide all the macro and micro nutrients, plus all the essential minerals and elements necessary to attain healthy soil.

The supplement also contains humates to provide the best environment for activating the growth of normal microbial flora and all the beneficial bacteria and fungi of the soil, and an organic ingredient imported from the United States. One of the BATI incorporators, an industrial engineer who works for a pharmaceutical company in the U.S., handles the importation of Black Earth of Canada’s humic acid products, which BATI exclusively distributes in the Philippines.

Compostar also contains mycorrhiza for promoting better root growth. It’s registered with and accredited by the Fertilizer and Pesticide Authority for commercial use. The rich soil supplement increases cationic exchange capacities, resulting in the increased capability of plants to absorb the needed nutrients by making these bioavailable for assimilation.

A farmer-client of Bio-AgriTech Inc. shows the leaves on lanzones trees in his farm.

This makes the plants healthy enough to be capable of prolific flowering and fruiting, and to bolster their immune systems to enable them to tolerate stress caused by pests, diseases, and environmental conditions. In addition to those functions, Compostar corrects soil acidity, enabling it to attain proper pH levels.

“BATI breaks down the soil conditioning, flowering, and fruiting regimen into simple, easy-to-follow steps through a four-stage protocol,” said Reyes. “Stage 1 is for soil conditioning and for promoting vegetative growth. For a tree to flower and fruit well, it must have a full crown of leaves that exhibit its health and vigor. We allow two to three months for that. Then, Stage 2 follows for flower induction, Stage 3 for stress conditioning, and Stage 4 for bud-to-fruit sustenance until harvest.”

To ensure adequate and efficient irrigation and supplemental fertilization, BATI prescribes the use of a fertigation network to help implement its protocol’s first, second, and fourth stages. The water for fertigation must be treated using specially-formulated Compostar Mightea bags placed in strategically-situated tanks throughout the orchard. As with a drip-irrigation setup, the system makes use of valve-controlled pipes that deliver the treated water to the trees.

BATI collaborates with its customers in the design and construction of the fertigation system to ensure the network’s optimum efficiency. The firm customizes the design for each customer to adapt to distinct factors inherent in their farms, such as proximity to the main water source, the size of the area fertigated, the number and age of trees, and the actual conditions of the soil and trees.

The company guarantees that its technology will help lanzones orchard owners to once again experience abundant harvests of the fruit even from trees that have stopped fruiting for years. The firm offers its services to those interested in reviving dormant lanzones trees in their farms or backyards.

Bureau of Plant Industry trials resulted in stunted pechay from unfertilized plots (T1). The other samples received chemical fertilization (T2) or were applied with various doses of Compostar (T3 to T6).

Initially primarily designed for fruit trees, BATI is reaching other crops like organically-grown pineapple and vegetables. Tests at the Bureau of Plant Industry’s Research Division resulted in excellent growths of pechay with Compostar, while the Technical Education and Skills Development Authority (TESDA) has adopted BATI for its organic farming vegetable production course.