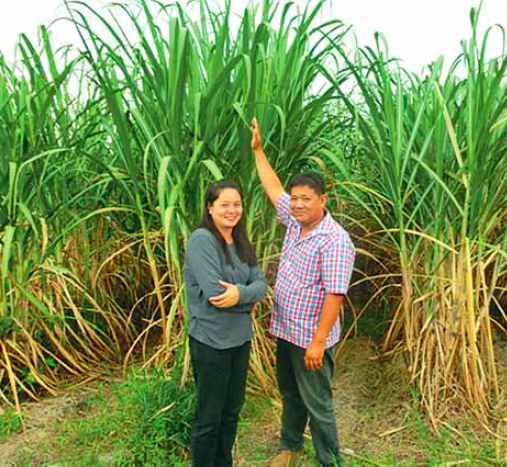 On Sept. 6, 2015, just 30 days after spraying Power Grower Combo and Vitamin B1 with trace elements on the stunted plants, the plants have almost doubled in height. In front of the fully recovered cane plants are Dr. Torno and his wife Cris.

This is the amazing story of how a stunted ratoon crop of sugarcane recovered from a prolonged drought of seven months in the farm of Dr. Richard Torno in Floridablanca, Pampanga. Dr. Torno is an award-winning farmer who grows sugarcane and other crops; he also raises farm animals.

After harvesting his sugarcane in December 2014, he allowed the plants to regrow from the stubble. That is what we call the ‘ratoon’ crop. Ratooning is a practice that many cane planters resort to so that they don’t have to make new plantings. The ratoon crop will usually mature earlier and produce a reasonable tonnage.

Dr. Richard Torno is shown with his stunted sugarcane on August 5, 2015, three weeks after the rains arrived but before Power Grower Combo and Vitamin B1 with trace elements was sprayed on the plants. The following day, the two formulations were sprayed on the crop.

This particular crop of Dr. Torno suffered from a prolonged seven-month drought so that as late as August 5, 2015, the cane plants were just about five feet tall. Many of them were even shorter. With such poor growth, high sugar yield cannot be expected.

Dr. Torno shows off his sugarcane ratoon that has fully recovered from the stunting effects of a 7-month drought.

But something happened along the way. On August 6, Alfonso G. Puyat provided Dr. Torno with two formulations of plant growth enhancers which the latter sprayed on the leaves of his stunted ratoon crop.

On Sept. 6, 2015, just 30 days after spraying Power Grower Combo and Vitamin B1 with trace elements on the stunted plants, the plants have almost doubled in height. In front of the fully recovered cane plants are Dr. Torno and his wife Cris.

The internodes of the unsprayed sugarcane were measured, and the average length is 2.5 inches.

Responsible for the amazing recovery of the stunted plants was Puyat’s Power Grower Combo and his new formulation of Vitamin B1 with trace elements.

Power Grower Combo hastens the growth of the plants. It encourages extensive growth of roots that take up the nutrients from the soil. Also enhancing the elongation of the canes is the application of Vitamin B1 with trace elements.

The sugarcane sprayed with the two growth enhancers had internodes averaging 4.75 inches.

What is the significance of this development? Now, many sugarcane planters can significantly increase the yield of their cane crops with Mr. Puyat’s formulations. The planters can compete better with other producers in other countries in time for the ASEAN integration at the end of this year.

The same plant growth formulations were also tried on the Super Napier or Pakchong1 which is an excellent forage grass and a potential source of biomass for fuel in sugarcane centrals, cement factories, and power plants. The same results were obtained. The napier grass rapidly grew tall.

Ph Experience in Biotech Corn as Model for ASEAN Members

Products that Can Be Derived from Beekeeping (Beekeeping Series, Part 5)