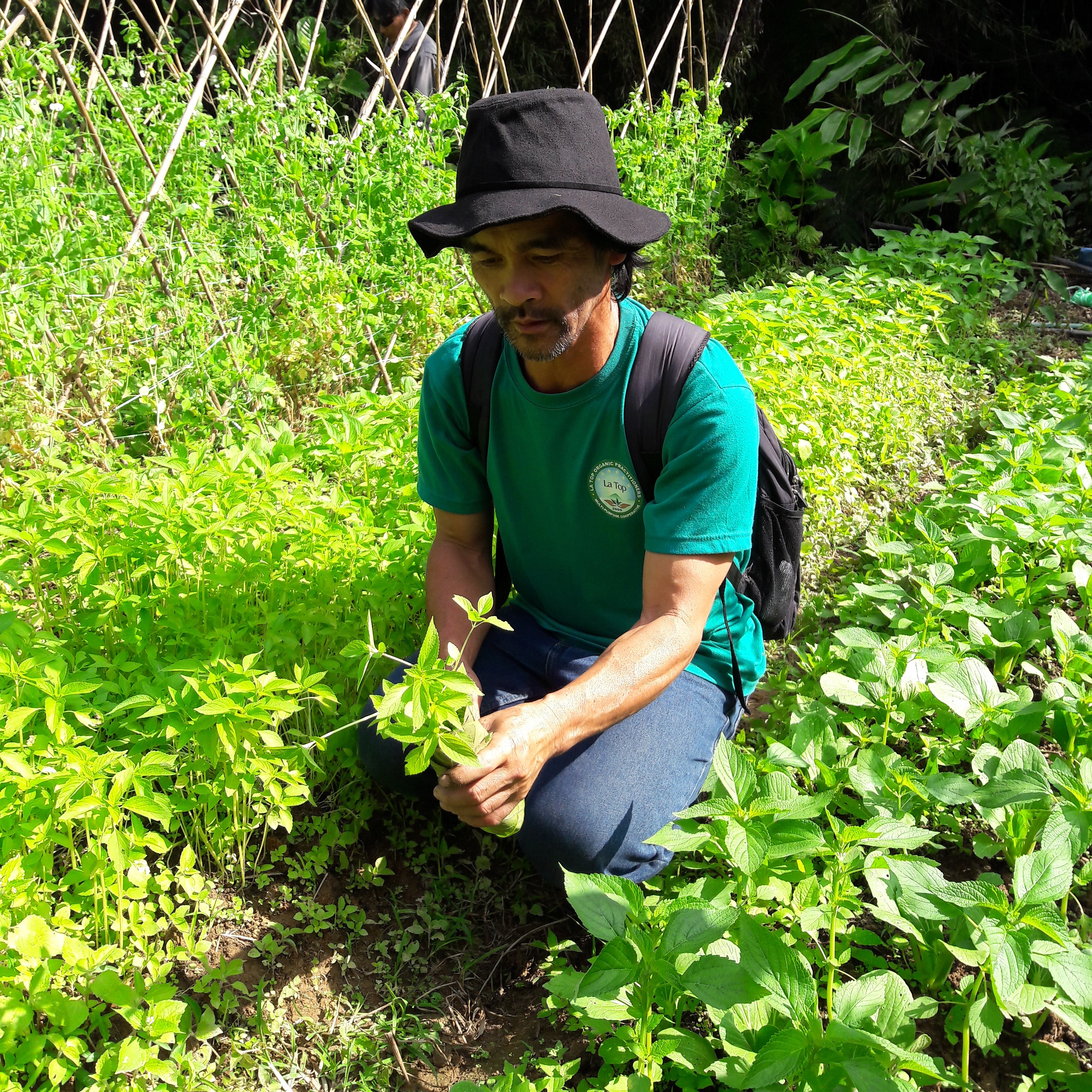 Global Seed Savers is dedicated to supporting food security in the Philippines by educating and encouraging farmers to return to their seed-saving roots.

The seed is tiny, but powerful. It is from where plant life begins, and is a key to successful agriculture. It is easy to take seeds for granted, especially since they can be so common. Fortunately, there are many organizations that have made it their mission to preserve these little powerhouses of life.

“Seeds are a good source of a combination of starch and proteins. This is why seeds are a part of our staple food sources. The top grains that feed majority of the people in the world like rice, corn, wheat all come from the seeds of plants,” says Karen Lee Hizola,Global Seed Savers’ Philippine Country Manager.

Global Seed Savers (GSS) is an international non-profit committed to supporting food security in the Philippines through empowering farmers by encouraging them to “return to the historical practice of saving seeds.” They also hold training programs on organic farming so farmers “gain the knowledge they need to propagate, store, save, and sell their own regionally adapted seeds.”

It Starts with the Right Seed

Not a lot of people realize this, but the kind of crop you get doesn’t just depend on the soil, water, and air it is given, but also from the kind of seed it starts as as well. This means that the quality of seeds saved is also important.

“Saving seeds is key to survival. Not just ours as a species but of the rest of the flora and fauna in the world,” Hizola says. “It’s fair to say that our activities have affected the balance of nature in a lot of ways. When we save seeds, we ensure that we have a distinct blueprint of something that is naturally self-replicating. In the hands of farmers, seeds become more valuable because farmers are the ones who plant them, provide food for their communities and store the next generation of seeds for the next planting season. This is a basic equation in food security. Seeds should be in the hands of the farmers.”

According to Hizola, until recently, seed saving was actually a big part of Philippine culture. “In our country, seed saving was (and hopefully still is or will be again) an important part of our culture. For example, the passing of rice grains for planting from one generation to the next was a matrilineal tradition in some areas,” she says. “For our ancestors and our not so distant progenitors, this was a way to ensure that their children and grandchildren would not go hungry. The same should be true now. We should save seeds to ensure our food security and the food security of our children.”

It also helps keep indigenous plants from disappearing. “Saving seeds also ensures that we are able to safeguard our endemic species against contamination and extinction,” Hizola says. “Benguet Association of Seed Savers (BASS) and our partners in Cebu have started looking into harvesting and storing local flora that are part of our food system. We are hoping to encourage all our partners and future partners to do the same.”

This makes going back to seed saving an important part of regaining food security in the country and uplifting the lives of Filipino farmers. “From a farmer’s economic standpoint, it would not make sense to buy seeds every planting season when s/he can save some from her/his harvest,” Hizola says. “In our work, we discovered that our partner farmers could save around 5,000 pesos annually by saving seeds. This sum might seem meager to other people but to some of our smallholder farmers here in Benguet, this is 5 to 12% of their annual income.”

Food Insecurity in the Philippines

Despite being a predominantly agricultural nation, the Philippines suffers from food insecurity, with many people living under the poverty line and farmers being one of the most marginalized sectors. There are many reasons for this.

“There are numerous threats that come from or result from a combination of different human activities. Environmental degradation and destruction, climate change, loss of biodiversity, unsuitable legislature (or sometimes, the lack thereof), how we view farming as a career path in this country, and the huge chasm or disparity between the rich and the poor are factors,” Hizola enumerates. “I think one of the biggest direct threats is still climate change. The changes in weather patterns disrupt the growth and development of plants and cause extreme conditions that cause loss of biodiversity. The loss of some insects, for example, in turn, affects pollination and natural patterns and thus, farming. Ironically, weather conditions are also hugely impacted by agriculture.”

She adds, “But I also think that if we were to be honest with ourselves, we will find that self-interest, greed and apathy are part of the root cause of food insecurity.”

The organization has been making headway with small farming communities who have seen the benefits of organic farming. A workshop, for example, turned into the Benguet Association of Seed Savers (BASS), “a DOLE registered group of about 20 very committed and active organic farmers who save seeds to share and to sell among members, partners and other people or interested groups.”

It all stated in December 2015, when Global Seed Savers founder and Executive Director Sherry Manning brought GSS’s flagship  progam Seed School in a Day to Tublay, Benguet for the first time. “We had an audience of 70 people who had to fill out an evaluation form at the end of the event. From 70, about 40 persons mentioned that they were interested in working with us. But that numbered eventually was whittled down to seven active and committed farmers. That number grew from seven in 2016 to 21 active farmers after two years,” Hizola says. “The two organizations have different roles. BASS is composed of farmers that provide seeds for the seed library and the community. GSS helps BASS by giving trainings and co-managing BASS until BASS becomes a fully independent partner.”

GSS also works with other small communities around the country. “We always start by assessing our partner’s needs. When we have a clear idea what the partner needs, we then create a plan. Since our flagship program is Seed School in a Day, that’s what we’re almost always asked to conduct,” Hizola says.

What happens after depends on the partner’s requirements. “For example, after Seed School in a Day in Cebu, the group there decided to start a seed library. Since they’re already organized and independent, they just consult with us from time to time and we are currently putting together a package for their seed library,” Hizola enumerates. “The case is different in Ilocos Norte and Mt. Province. We’re currently working with them to create a closer partnership.

“We’re a young non-profit and we don’t want to make it difficult for possible partners to approach us. So we keep what works and remove what doesn’t. We’re learning and iterating as we go and as we grow.”

GSS is currently working on ensuring food security from different angles with a possibly “four-part program that includes Seed School in a Day, Culinary Demo, Introduction to Permaculture and possibly a course on disaster survival and first aid for farmers,” Hizola says. “We have done the first three with our farmers here in Benguet and we are working on putting together a pilot course on the last topic.”

The organization picks program attendees depending on the partners they work with. “Here in Benguet, for example, BASS members come from different organic cooperatives. We were lucky that in this province, organic practitioners were already organized into different groups,” Hizola explains. “On the other hand, one of our more recent partners is an agriculture school in Ilocos Norte. We have yet to assess how to form a seed saving group there.”

Farmers who have worked with the organization have reported good results, some of them life-changing. “BASS members have told us that they were able to save around 5,000 pesos annually by learning how to harvest and keep their own seeds. That may not seem like a big sum, but again, that’s around 5 to 12% of their annual income from farming,” Hizola says. “One of our farmers said that she learned how to make the impossible possible when she learned to save seeds. She meant that there are some plants that do not get to the seeding stage here because of the climate. After her trainings, she learned how to get them to seed.”

GSS also tries to hasten the transfer of knowledge and technology among farmers by developing trainers from the within the community. It has been transformative for everyone–the organization, the farmers, and the new trainers themselves. “Last year, we gave our BASS members a Train the Trainers course. Since then, we made it a point to have two farmers co-train with me every time we conduct a Seed School in a Day training,” Hizola says. “One farmer told me that she realized that she never thought she could do it because she was only a farmer. But she’s now one of our best trainers.”

This is just the beginning. GSS hopes to reach farmers from more provinces. “(We want) to make sure that there is at least one seed library per province,” Hizola says. “According to Small Family Farmers: At the Heart of Climate Justice by Development and Peace Caritas Canada, smallholder farmers (those who own family farms that are less that two hectares) farming on only 20 to 30% of the world’s arable land still produce 60% of food. This is why we should try as much as possible to keep the seeds in the hands of these smallholder farmers.”

Anyone can save seeds, and if you, the reader, are so inclined, you can donate your heirloom varieties to GSS for propagation. “If we have readers out there who have been cultivating their heirloom plant varieties and indigenous species and are willing to share, we would be happy to have more seeds,” Hizola says.

Communities may also get in touch with them for workshops and seed-related endeavors. GSS also just started a crowdfunding campaign to help further the cause. To support, go to https://globalseedsavers.giv.sh/5a20

Products that Can Be Derived from Beekeeping (Beekeeping Series, Part 5)