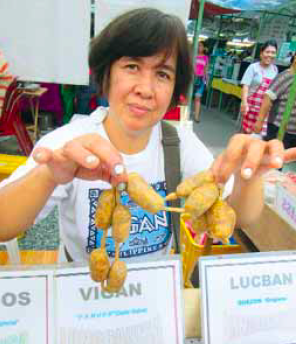 Get to know the “Longganisa Queen” of the AANI Weekend Market who offers sausages from all over the country.

Don’t look now, but weekend markets—where fresh and processed farm produce is sold—are helping send students to college. And not just for ordinary college or vocational courses at that.

Close up of Lucban longganisa.

Take the case of Tess Evangelista, who has been a stallholder for 18 years at the AANI Weekend Market at what is now known as Arca South, a development project of the Ayalas in what used to be called FTI or Food Terminal Inc. in Taguig City.

Tess is rightly known as the “Longganisa Queen” of the AANI Weekend Market that is held every Saturday and Sunday. And she is very proud to say that she has sent three engineers to college, thanks to her little business. Her eldest is Charles Brian, who finished electronics engineering and is now employed at the Department of Public Works and Highways. The second is Cyra, a chemical engineer who is now working with the Department of Science and Technology. And her latest is Cyrus, who just passed the board exams for civil engineers and was among the top 8 passers.

Tess and the small longganisa from Cebu.

Tess had planned it out early that she would specialize in longganisa from different regions. She particularly chose the ones that didn’t use artificial or synthetic flavoring. And so she sought out the supplier of Vigan longganisa, which has become her bestseller.

Every week, the supplier sends to her 100 dozens of the longganisa, worth Php10,000. Then she talked to the supplier of Batac longganisa from Ilocos Norte, which is well known for its garlicky flavor.

We can say this because we tasted some during a trip to Alaminos, Pangasinan, and we still remember it until now. It is naturally a favorite of Pangasinenses. In fact, when we were interviewing Tess that Saturday morning, a lady from Alaminos was a bit disappointed because she got only a dozen of the Alaminos longganisa—the last of 40
dozens sent by Tess’ supplier.

With a regular buyer of Alaminos longganisa.

Aside from longganisa, Tess sells something special that no other stallholder at the AANI Weekend Market sells. This is the “tapang usa” which comes from Nueva Vizcaya.

Her supplier sends her 10 kilos of marinated ready-to-cook “tapang usa” every week. And then she sells another special item: boneless Dagupan or Bonuan bangus, which is often considered the best-tasting bangus in the country.

Well, as we said, weekend markets are helping send students to college. And the best proof is Tess Evangelista of Lingayen, Pangasinan.