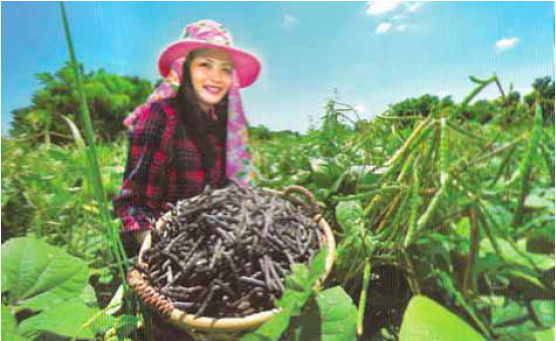 Priscilla Naniong of San Mateo, Isabela shows a tray of mung bean pods harvested from a farm in town. The El Niño-tolerant crop has been dubbed “black gold” due to its black-colored pods. (L. Perante Jr.)

Resilience is a key trait farmers possess, one that is particularly demonstrated in challenging times like today, as their livelihood is affected by the drought effects of the El Niño phenomenon.

At a press conference in May 2015, Dr. Flaviana Hilario of the Philippine Atmospheric, Geophysical and Astronomical Service Administration (PAGASA), explained that El Niño was expected to reach moderate strength by August 2015 and to weaken by January 2016, eventually ending in May 2016.

Dr. Hilario pointed out that the key indicator of El Niño would be rainfall levels below normal throughout the country until December 2015.

This weather phenomenon poses a real threat to the livelihoods of most farming communities that produce rice and to other communities that rely on the rain for water and who do not enjoy the benefits of irrigation or a good water supply.

“Unlike rice, mung bean (munggo) does not need flooded paddies to survive, so it grows wild,” said San Mateo, Isabela vice mayor Robert Agcaoili, himself a farmer. Locally called ‘balatong’, mung bean is a drought-tolerant crop. The root system of this legume also restores the fertility of the soil as it is filled with nitrogen-fixing bacteria.

“We can just imagine the thousands of hectares planted with rice during the regular cropping season that would automatically be converted into verdantly robust mung bean plantations during summer months, when most parts of the country are in a dry spell. We can see no gaps of productivity since, after harvesting rice, the first priming for mung bean picking (follows) just 60 days after planting,” said Agcaoili.

An average production of 800 to 1,000 kilos of mung bean per hectare at the prevailing farm gate price of PhP 65 to PhP 90 per kilo translates into incomes ranging from PhP 52,000 to PhP 65,000 per hectare. The town has more than 7,000 hectares of farms planted to mung bean during the dry season, which translates into PhP 455 million in income for local farmers during these dry months.

The whole town is also looking forward to the opening of a sotanghon (vermicelli noodles) processing center, which would solve marketing issues and is sure to entice many farmers to engage in large-scale mung bean production.

The tiny first-class town has been officially declared “The Mung Bean Capital of the Philippines” by Department of Agriculture Secretary Proceso J. Alcala.

Farmers all over the Philippines can learn something from the success of San Mateo town in Isabela, as they brace for drier months ahead.