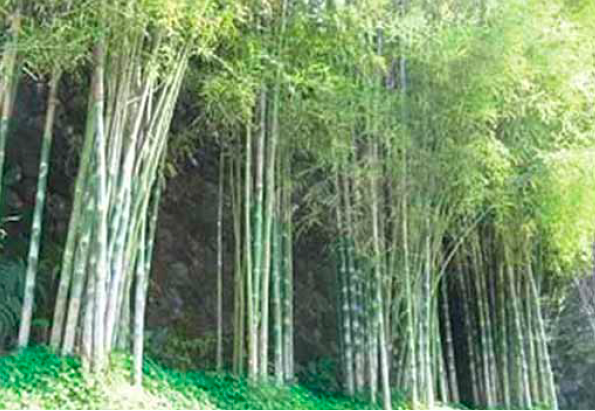 Nursery operators in Laguna and Bulacan have discovered that the production of ornamental bamboo is lucrative.

Not many people know that bamboo is a type of grass. Also, few know of its use as an embellishment in landscaping. Filipino bamboo farmers consider sales of bamboo as an ornamental plant to be merely a secondary consideration, unlike in Japan, China, and other Asian countries.

But now, more landscapers and property owners are noticing the beauty of this humble plant. Nursery operators in Laguna and Bulacan have discovered that the production of ornamental bamboo is lucrative.

At present, there are many species of ornamental bamboo in the country. The influx of these ornamental bamboo species was brought about by their importation by the Environment Research and Development Bureau (ERDB) through its bambusetum (gene bank conservation area for various bamboo species) establishment project and introduction of new species by garden enthusiasts. Many of these unique bamboo species are kept as prized possessions in private gardens of collectors.

Yet, one does not simply grow ornamental bamboo. There are techniques that have been scientifically proven to be the most effective methods of propagation, like culm cutting, marcotting, and division or offset. The division or offset method is commonly used and widely accepted in the market.

Through the division or offset method for Thyrsostachys siamensis Gamble, the newly developed bamboo plant, dubbed as ‘junior’, is separated from a clump having 3-5 culms. The junior comes from shoots that are allowed to grow to their full height and to develop its leaves and branches before being separated from the clump.

Once separated, it is planted on the ground, supported by stakes, to flourish and produce shoots. Continuous production of shoots in a year will result in the development of a clump.

Whenever there is a demand for it, a bamboo producer may ball out or lift the clump even if it has just two stems or culms. The usual practice, though, is to let the clump have 5 or more culms before applying two stem-division, which is done by balling the whole clump or a part of it. The unballed part is left to grow more shoots for a continuing macroproliferation.

The division or offset method is likewise used for yellow or golden buho but requires a different approach. The bamboo clump is left to develop in-ground at the growing area until it reaches 10 culms before being separated into five culms per division.

Immediately after separation, each plant is potted in a 12” polyethylene bag with a medium composed of 1:1 rice hull and coconut coir or 2:2:1 rice hull, coconut coir, and soil. No pruning and cutting may be done on a newly separated plant.

The newly separated plant should be supported with bamboo poles and plastic twines to minimize disturbance. This will facilitate the development of a root system and faster recovery from balling and separation.

The application of rooting hormones will increase the absorption rate of water and nutrients needed for growth and development. A month after potting, fertilizer application is recommended for the plants to grow luxuriantly and become vigorous and attractive to buyers. Urea and ammonium at 10-20 grams per pot are the types of fertilizers normally used.

Not many pests and diseases are reported for ornamental bamboo species; usually, only caterpillars and locusts are observed on them.

The potted plants are good for selling after one and a half to a couple of months after potting and tending in the nursery.

Whenever the plants are not immediately sold, new shoots can come up and become culms in the future. In this case, the new stems are again separated and tended until they are ready for sale.

The research and development initiative on ornamental bamboo manifests the goal of the Council and the Department of Science and Technology as a whole in maximizing science and technology potentials to attain sustained growth.

Problems and Prospects of the Mango Industry