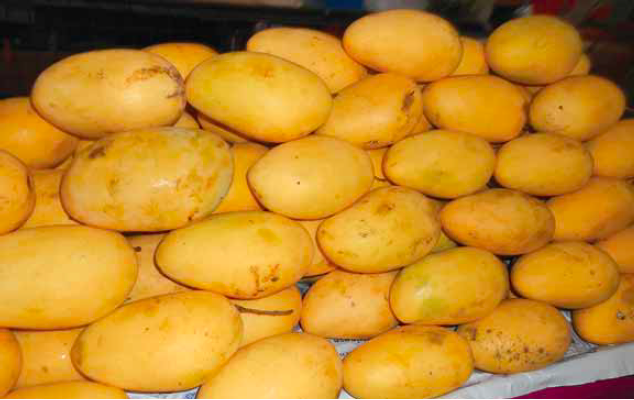 The months of April and May 2014 were terrible months for mango growers all over the Philippines. Buyers were paying only Php5 per kilo even if the fruits were of good quality. This was true in Northern Luzon, Visayas, and Mindanao.

What was the reason? There was a glut in the market. The mango harvest in Mindanao coincided with the peak season in Pangasinan, Ilocos, and other parts of Luzon. Definitely, practically every commercial grower lost money. Even Ricardo Tolentino, the Mango King from Ilocos Norte, admitted that he also lost a lot of money in 2014.

When we called him up in March 2015 to find out how the mango industry was doing, he was so happy to tell us that he was doing great. He was selling his mangoes to exporters at Php 50 to R 70 per kilo. And he was making a very good profit.

He lamented, however, that many of his fellow mango growers were left out. Many of them did not take care of their trees and induce them to flower. Tolentino surmised that it was possible they did not want to lose money again. One other reason could be that they did not have the funds to induce their trees to bear fruit. He explains that it really takes a lot of money to induce mango trees to flower, especially if you are taking care of hundreds or even thousands of trees.

In the case of Tolentino, however, he had the capital to finance his mango contracting operations in 2015. He says that this year, he managed no less than 10,000 century-old mango trees and 70,000 grafted trees (not century old but 15 to 25 years old).

At the Mango Congress

Many problems of the mango industry were brought up during the 17th National Mango Congress last October 2015 in Cebu City under the auspices of the Mango Industry Foundation Inc. (MIFI), headed by Virginia de la Fuente. The Congress was well attended by more than 200 participants from all over Luzon, Visayas, and Mindanao.

De la Fuente stressed the need for the cooperation of all stakeholders, a sentiment which was also echoed by other industry players like Tolentino, who said that Luzon growers can’t move their production beyond May every year because the months after that will already be the rainy and typhoon season in Luzon. On the other hand, Mindanao growers can schedule the fruiting of their trees in the rainy months of June to November. The growers in the South can do this as well, and that will be to their advantage.

There was no question about the reasonableness of the proposal. The leaders from the South were seen nodding their heads. It still has to be seen, however, if the proposition will be followed by the growers.

Excessive Use of Chemicals

Tolentino, the only GAP (good agricultural practices) certified mango grower in the country today, observes that many mango owners are spraying their trees excessively against pests (mango hoppers) and diseases. For instance, he said, many mango growers in Pangasinan have told him that they are spraying their trees 10 times in one season against hoppers. And the owners told him that the hoppers don’t seem to mind the chemicals anymore.

Tolentino says he is sure that the mango hoppers in Pangasinan have developed resistance to the chemicals due to overuse of the same. He has his own technique to minimize chemical use, which he shared with Congress attendees. He said that when he sprays his trees with the flower inducer, he combines it with the insecticide and fungicide. By the time the flowers are out, there will be very few insects around. So he only sprays his fruiting trees three times up to harvest time instead of ten times as practiced by some farmers in Pangasinan.

Many mango growers are losing so much due to poor handling of their harvests. Virgie de la Fuente cited the case of a mango grower in Pangasinan who delivered several tons to a buyer in Cavite. The grower used cement bags to pack his fruits instead of plastic crates. The result? Five tons of his delivery was rejected. So there is a need to teach the mango farmers proper postharvest handling.

Many have complained of high transport costs. Growers in Southern Mindanao, for instance, have to transport their harvest as far as Cagayan de Oro in Northern Mindanao, resulting not only in high costs but also in losses due to reduced quality of their produce. De la Fuente made the suggestion that the shipping companies be given access to ACEF (Agricultural Competitiveness Enhancement Fund) funds to improve their cargo handling facilities for delicate fruits like mangoes.

The mango industry has been promised by the Department of Agriculture a grant of Php10 million to help rehabilitate the mango industry. The funds could go into training as well as setting up facilities that will benefit the mango farmers. That was promised during the first year of the Aquino administration. So far, however, only the first tranche of Php 1.5 million has been released, although the requirements for release of the remaining amount are all complied with as of the holding of the Mango Congress. They are blaming the Department of Budget for withholding the promised amount.

Potassium nitrate is the main ingredient for inducing mango trees to flower. But because it is also a material for making bombs, there are very strict regulations that have to be met before one can buy and transport the chemical. There is another chemical that is also effective in inducing mango trees to flower. This is calcium nitrate. An expert at the Mango Congress explained that calcium nitrate is not a material for making bombs but because it is a nitrate, it is lumped with potassium nitrate as a material that cannot be bought and transported freely.

What are Stakeholders Doing?

The Department of Trade and Industry (DTI), represented in the Congress by Regional Director Linda Boniao of Cagayan de Oro, is very sure of the big demand for Philippine mango in other countries. She said that DTI has been assisting different industry sectors by providing Shared Service Facilities (SSF) wherever it is deemed appropriate, and the mango industry should be no exception. Clustering of stakeholders is their strategy so that they can provide assistance to well-defined groups.

Over the past several years, mango growers in Southern Mindanao have been losing their shirts, so to speak. While the prices of inputs like fertilizers and crop protection chemicals have continually become more expensive, the price that they get for their harvest has been erratic and mostly below production cost.

As a result, many of the mango farmers have been cutting down their trees because the price per kilo went down to as low as Php 5 per kilo. There was no way the farmers could make a profit at this price level.

That situation worried Emmanuel ‘Manny’ Bartocillo no end. He himself is a mango grower, trader, and processor. Most of their mango trees are 20 to 25 years old and they are in their very productive years if they are properly taken care of. That prompted him to think of ways to save the mango industry, particularly in Region 12, which consists of the four provinces of South Cotabato, North Cotabato, Sarangani, and Sultan Kudarat, plus the two cities of General Santos and Cotabato. The area planted to mango in the region is 17,400 hectares with about 779,000 trees.

What did Manny Bartocillo do? He spearheaded the formation of the Region 12 Mango Industry Development Council (MIDC) of which he was the founding president; he still holds the position. Among other initiatives, the strategy is to teach the mango growers the improved techniques of production to increase their yields as well as to cut their
expenses so they will make a profit.

Mango growers were formed into clusters in the four provinces and two cities. There were three clusters in South Cotabato, for instance; the same goes for North Cotabato and the other areas. Why the clusters? Well, that simplifies the transfer of technologies, production strategies, and coordination of activities. One activity is the training on GAP. Another is value-adding to increase incomes. Development of business entrepreneurship is another important program of the MIDC.

In orchard management, the mango owners are taught proper pruning, fertilization, spraying against pests and diseases, irrigation, and the like. By adopting GAP, the farmers can produce higher yields of good quality fruits at a lower cost.

Another campaign being emphasized is the schedule of fruiting so that the harvest in Mindanao will not coincide with the peak season in Luzon, which is April to early June. One reason why prices in the past went down to unprofitable levels was because the harvest in Mindanao coincided with the Luzon harvest. The only beneficiaries have been the mango processors because they could buy their requirements at a low price.

It has been proven that by timing their production when it is off-season in Luzon, the mango owners in Mindanao can get a profitable price. One example that Bartocillo cited is the case of Lito Garcia of Valentine’s Farm in Malanday, Malungon, Sarangani province. Last October, he was able to harvest 35 tons from his 300 trees that are 15 to 20 years old. Because it is off-season, he was able to sell his harvest at PhP 50 per kilo. That was a very profitable crop.

Another fellow that Manny Bartocillo cited was a Mr. Hassan of San Jose, General Santos City. From September to last October 15, he was able to harvest 110 tons from 500 trees. Of course, he was also able to get a high price. So you see, there’s a way to get a profitable price. One possible way is to apply Paclobutrazol in the soil at the right time. This chemical hastens the maturity of the leaves so that the tree can be ready for flower induction at the desired time.

The MIDC is currently disseminating practical technologies developed by experts of the Sultan Kudarat Polytechnic University. One of them is how to make mango ketchup, which can be a multipurpose sauce. It can be a very good lechon sauce, for instance. Another is how to make mango puree which can be subsequently made into ready-to-drink mango juice.

What’s good about making mango sauce is that even the rejects can be used as raw material. Bartocillo himself makes his own Manny Mango Sauce. He says that three kilos of fruits will produce 12 bottles of 350 ml (milliliters) each. Each bottle sells for Php 70. That’s Php 840 worth of sauce from three kilos of mango. There’s a lot of value added here.

Interestingly, new products that could enhance organic mango production are being released in the market. One of them is Better Harvest, a formulation by AP+LB Agritech Development, Inc. of Charlie Miradores. This is a formulation created with the help of UP Los Banos scientists.

When sprayed on the leaves of mango trees after fruit set and 10 to 15 days later, fruit drop will be minimized. The fruits will become bigger and are claimed to be sweeter and with longer shelf life. A number of users from Batangas, Nueva Ecija, and Bicol were at the Congress to share their experiences with Better Harvest.

Another new product that was introduced for the mango industry was Supravim, distributed by Anthony Cortes. It also promises good results, not only for mangoes but also for other crops.