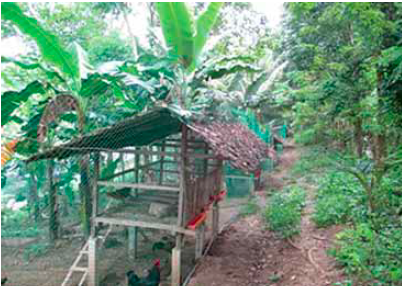 A low-cost house for egg production of native chickens.

Did you know that there is a growing demand for native chickens in the country to supply the organic chicken and inasal (roasted meat) markets?

There are more than 6 million farmers raising native chickens in the country. In Western Visayas—the region with the highest population of native chickens—the yearly demand has been estimated to be 64 million.

According to a study, six of the 243 breeds of local or native chickens in Asia are found in the Philippines. Among these six breeds are the “Paroakan” of Palawan and the “Darag” or “Bisaya” of Panay.

Filipino farmers in rural areas prefer to raise native chickens instead of the imported commercial breeds because the former survive better under local conditions, feed on available food sources, and require less care. Moreover, native chickens can produce eggs and meat for home consumption and earn extra income for rural families. There is also a consumer preference for native chickens over foreign breeds because they are “organically grown, leaner, and have a distinctive taste.”

Native chickens for sale in an Iloilo market.

Dr. James Cabarles, Jr., dean of the Central Philippine University’s College of Agriculture, Resources and Environmental Sciences in Iloilo City discovered his passion for native chickens when he was 10 years old in Leon, Iloilo. Starting with 20 hens (which later increased to 50), he sold 10-20 chickens in the Jaro market of Iloilo City. His father is a full-time farmer. In 2011, he earned his Ph.D. in Animal Science at the University of the Philippines Los Banos with a dissertation on “The Phenotytpic Characteristics of Native Chickens in Western Visayas.”

In 2011-2014, with funding from the Department of Agriculture (DA) and the Philippine Council for Agriculture, Aquatic and Resources Research and Development (PCAARRD) and the Commission on Higher Education (CHED), Dr. Cabarles developed packages of technologies for commercializing native chicken hatchery, grow-out, and feed milling, particularly for small and marginalized farmers. A 7-hectare experimental farm for native chicken production—the largest of its kind in the country—was established in Leon, Iloilo with the all-out support of the CPU Board of Regents and Dr. Teodoro Robles, CPU president.

The university has already invested about Php 4 million (M) in the project; this includes Php 3.3 million for the feed mill.

To date, thousands of small farmers not only in Iloilo but also in the neighboring provinces of Antique and Capiz have availed themselves of the native chicken technologies (dubbed CPUCARES) through the extension services of the university. The CPU’s native chicken project has also benefited the 4Ps (Pantawid Pamilyang Pilipino Program) beneficiaries of the Department of Social Welfare and Development in cooperation with its counterpart local government units. Presently, the project produces more than 4,000 eggs and 3-4 tons of feeds a month. It hopes to increase its egg production to 15,000 per month next year.

A low-cost house for egg production of native chickens.

In the Community-Based Participatory Action Research (CPAR) techno-guide of the DA, prepared by Dr. Cabarles and his team, a backyard farmer raising 110 day-old chicks can market 99 market-size chickens weighing 0.8 kg each after three months of rearing and earn a gross income of 17,820 pesos. With the expenses for the day-old chicks, supplemental feeds (CPU-CARES booster, starter, and grower), phytobiotics (local herbal concoctions for boosting
disease resistance), depreciation for the housing (built of low-cost materials), and labor amounting to 14,635 pesos, this farmer can make a net income of Php 3,250 per cycle. While the monthly additional income of a little over 1,000 pesos may not be much, it can mean a when it comes to helping marginalized families making both ends meet.

For the hatchery technology, the eggs are produced by breeders at a ratio of one rooster to seven hens and incubated either naturally or through an artificial incubator. For rearing, the day-old chicks are first kept in a brooding house for 45 days and then transferred to the grower house in which the chickens each have free-range space of five square meters until they are marketed after another 45 days. The CPUCARES feeds use locally available ingredients such as corn, copra meal, crab meal, and fishmeal in mash, crumble, or pellet form.

(From left): A bag of CPU-CARES Supplemental Feed for native chickens. Dr.
Cabarles shows the pelleting machine for
producing native chicken feed to a visitor.

Fertilized native chickens eggs sell for Php 12 per while day-old chicks sell at Php 35 each. Although the feed conversion of the native chicken is much higher (3-4) than that of the commercial foreign breeds, with the cost of producing the former at Php 150 each and a selling price of Php 180 per head, the farmer can earn Php 30 per chicken, according to Dr. Cabarles. To further improve on the income of farmers and performance of the “Bisaya,” he is currently doing least cost studies on the feed and systematic breeding for the stabilization of the breed with his graduate students.

In 2004, Dr. Cabarles was cited as the national winner of the Republica Award of the Commission on Higher Education for “…his significant contribution as researcher to Natural Science and Agriculture Research and Development of the Philippine native chicken in Philippine society.”

For more information on farming native chickens, Dr. Cabarles can be contacted by interested readers through email at jamescabarlesjr@gmail.com.