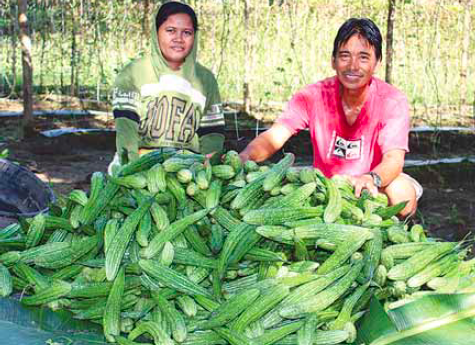 Caraga couple with their bumper harvest of ampalaya.

The lives of farming families in Caraga, the second poorest region in the country, are becoming much better, thanks to a four-year program funded by US Department of Agriculture and implemented by Winrock International.

This is the Philippine Cold Chain Project, which was started in September 2013 in the two Agusan provinces, two Surigaos, and Dinagat Island. Nearly 30% of the population in Caraga lives below the subsistence threshold, with most of them coming from indigenous communities, upland settlers, landless farmers, and small fisherfolk.

In the last two years of the project’s implementation, life has become much better for the farm families, according to Jim Orprecio, deputy chief of party.

Couple in their tomato plantation.

A three-pronged approach is being implemented to increase farm productivity and income. Where it is appropriate, vegetable and fruit production is being pursued. The project has partnered with the East-West Seed Company to provide the technical expertise and improved vegetable seeds for the farmers to grow.

Jim observed that prior to the project’s implementation, vegetables had to be imported from neighboring provinces like Bukidnon, Misamis Oriental, or Davao. Today, many of the residents are producing vegetables not only for their own consumption but also for sale. A Sunday market is now operational around the church where the vegetable growers sell their harvests. The farmers now produce hybrid varieties of tomato, eggplant, ampalaya, and other favorites.

The beauty of producing vegetables is that it takes only a short time before they are ready for harvest. And there are varieties that can be grown year-round.

Caraga couple with their bumper harvest of ampalaya.

One housewife who has become obsessed with vegetable production is Julie Pelayo, 38, of Esperanza, Agusan del Sur. Before learning about vegetable growing at the Farmers Field School, she just stayed at home to take care of her children while tending a small food stall.

She has now given up her food stall and is into full time planting of vegetables like bell pepper, ampalaya, and other favorites, including watermelon. During the productive life of her bell pepper, she was making a weekly profit of Php 2,000. And from her watermelon, she made Php 5,000. These meant a lot to families like hers which did not previously have a regular source of income.

Jim is very upbeat about what the project has done for swine raising in cooperation with Pilmico, a leading livestock feed manufacturer. Pilmico is not only the source of balanced feeds, it also provides the guidance to help the farmers raise their farm animals. Swine raising is being implemented in 260 barangays. Raisers are organized into groups so they can more conveniently avail themselves of training, inputs, and credit from microfinance.

From the start, the strategy was to introduce improved breeds that would grow faster than the pigs traditionally raised in the area. This meant the introduction of 120 selected breeders, which were grown in multiplier farms, with a total of 450 superior gilts. These multiplier farms produce the piglets that are fattened by the families.

Beginners may start with three fatteners. As they gain experience and capital from their sales, they can increase their fatteners to six, then to 9. Why increments of threes? Because the housing is modular. New pens could be added to the old one that accommodates three weanlings.

Native pigs are also raised by the farmers.

The multiplier farms are a good income source. Usually, one sow will produce 18 piglets in one year. The current price for piglets in Caraga is Php 2,500 for the first 10 kilos, with an additional Php200 per kilo above that. To complement the superior gilts, the project has also introduced 15 high quality boars as source of semen for artificial insemination. More than 200 AI (artificial insemination) technicians have been trained, according to Jim.

The result of the swine upgrading? In the past, Jim said, the traders would only pay Php80 per kilo to the backyard raisers. Today, the price has drawn level with the price of commercially grown hogs at Php110 per kilo liveweight.

The fisherfolk are also being given new moneymaking opportunities. The Department of Social Welfare and Development (DSWD) is providing Php 20,000 per beneficiary so that they can put up a fishcage for raising bangus or tilapia. In a growing period of four months, the fish farmer can harvest 4 to 5 tons of fish, according to Jim. The expenses are paid after harvest.

A fish cage being stocked with bangus fingerlings.

The small fisherfolk have found a gold mine in the Spiny Lobster, known scientifically as Pinalurus ornatus, which they grow in cages. This is a low-volume but high-value commodity, according to Jim.

It is low-volume because the fish farmer may take care of only 150 to 200 pieces in a six-square-meter cage at the edge of the sea. It is high-value because the 150 pieces when grown to 600 grams each can mean a big fortune to the small fisherman. Why? Because the current farmgate price is Php2,300 per kilo. The 150 lobsters will weigh a total of 90 kilos after a culture period of nine months to one year and will fetch a total of Php207,000. No small peanuts for a small
fisherman. After deducting the cost of production, there will still be a big profit left.

Joselito Nobillos, Winrock’s aquaculturist, says that previously, not many small fisherfolk could afford to grow lobster on their own because capital was needed for the operations. For instance, the 50-gram fingerlings bought from catchers from the wild cost more or less Php500 each. So the 150 fingerlings would cost about Php75,000, which most small fisherfolk don’t have.

Spiny lobster fetches about Php2,300 per kilo or even more.

Now, however, Winrock makes it possible for the small fisher to start a 150-lobster project because he or she can borrow from the First Community Coop (FICCO), with the loan guaranteed by PCCP. A partner of Winrock in the project, FICCO is a big Mindanaobased cooperative with 36 business centers and satellite offices in the south. The farmer does not receive the loan in cash. When he receives the 150 fingerlings, he signs a document that is given to the fingerling supplier. The supplier in turn presents the same to FICCO to get his or her payment.

The fish farmer pays off the loan after selling the lobsters. There’s no problem selling the harvest because the demand from Hong Kong and China is so big. And the importers prefer the cage-cultured lobster because they are much better than those caught from the wild. Sometimes, according to Nobillos, catchers from the wild have to squirt certain poisonous chemicals to induce the lobsters to come out from their hiding places among the rocky crevices. That’s bad.

Daniel Gudahl, PCCP’s chief of party, says that farmers usually put up their makeshift houses right beside their lobsters’ cages so that they can guard the lobsters from poachers. They do not mind the long wait of nine months to one year before they can sell the lobsters. After all, their attention is not focused all day on the lobsters. They can also go out fishing to catch trash fish to feed their lobsters and other fish for their families.

Ronald Valencia, a fisherman of Cagdianao, Dumagat Island, borrowed Php81,700 from FICCO to pay for 200 fingerlings that he raised as his first crop. He was so happy because he was able to make a profit of Php 214,350 in a culture period of one year.

Part of his profits were subsequently reinvested in 313 fingerlings worth Php 120,000 and the rest was used to buy a new motorcycle and other necessities for the home. Ronald does not have any loan to pay off now and he expects another bonanza from the 313 fingerlings that he is currently culturing right beside where he and his family live.

There you are. Life is getting much better in Caraga, thanks to the cold chain project.