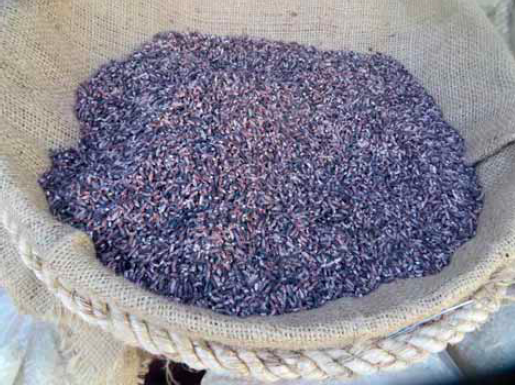 Black rice at the harvest festival in Bacolod City.

At the recent Negros Island Organic Farmers Festival in Bacolod City, the colored rice varieties—black, red, and brown—were among the most conspicuous at the market stalls.

Most are organically grown, and they fetched high prices of Php80 per kilo (kg) or thereabouts. Some were priced higher.

We were able to meet a number of growers as well as other stakeholders like a businessman who is trying to help small farmers with limited resources. Many of the rice farmers in Negros till just about a hectare each. Some have just a half hectare. But there are also others with bigger hectarage. From what we saw and gathered, we realize there is much potential in producing colored rices, but there are also challenges that have to be addressed.

One of the more successful colored rice producers that we met is Julio Mirasol of Moises Padilla town. When he started planting organic colored rice in 2003, he planted only 3,000 square meters. From that area, he was able to harvest 39 sacks of palay weighing 45 kg each.

Julio and Rosalie Mirasol showing their black rice at the harvest festival in Bacolod City.

Most of the harvest was for home consumption, but if everything was milled and sold commercially, that would have given him a reasonable income. The milled rice was equivalent to 877.5 kg with a gross value of Php 70,200. Julio really loves to grow colored rice for his own good reasons. He is now devoting 6.8 hectares to rice consisting of separate parcels.

How about the cost of producing colored organic rice? Well, Nicolas Narajos of Valladolid, who is currently converting his farm into an organic farm, gave us the answer. He explained that more or less, the value of inputs in organic rice production is about the same as that of the conventional chemical system of farming. But there is a big difference.

In conventional rice production using chemical inputs, he said that farmers usually apply Php12,000 to Php15,000 worth of chemical fertilizers per hectare. In the case of organic farmers, their fertilizers include vermicompost and other materials like fermented fruit juice, fish amino acid, and the like, which are worth about the same. However, organics
farmer practically do not have cash expenses for those things because they make these themselves.

Julio Mirasol notes, however, that all is not well when it comes to the production of colored rice by the small farmers who till just one half to one hectare. Most of the farmers would like to convert their palay into cash as soon as their crop is harvested.

That’s because they need the cash for their family’s upkeep and to pay for their loans. The small farmers now prefer to plant the conventional varieties using chemical fertilizers. Why? Because as soon as they harvest their palay, they can sell the same to traders right after threshing. They can’t do that with the colored rice because there are no buyers for their palay. If the small farmer has to mill the palay and sell the milled rice, it will take time. He will have to bring his
rice to the market for sale. That will entail transport costs and he will not be sure if he could sell all his milled rice in the public market. Most of the people can’t afford rice that is Php80 per kilo.

Black rice at the harvest festival in Bacolod City.

There’s a possible solution to the predicament of the small organic rice farmer. Ramon Uy, the manufacturer of farm machines, has been helping small farmers by offering to buy their colored rice harvest at a premium. He mills the palay and sells the milled rice through his wife’s organic garden and restaurant and through his son’s outlet inside a big mall.

But Mr. Uy could not possibly cover all the farmers in the province. Perhaps, like-minded businesspeople should take care of the produce of other clusters of farmers in other locations. Or the government could help link the farmers to the market.

At one time, the Department of Agriculture (DA) was crowing about the export of colored rice to special markets abroad. Perhaps, the DA should double its efforts in looking for markets abroad as well as locally. The only way to make farmers produce more colored rice is to enable them to sell their harvests at a profit.

Colored Rice in Many Places

Negros is not the only place where farmers are planting and producing colored rices. We saw also cold rice in Lanao del Norte during a recent visit. There’s a black glutinous rice that was selling in the Maranding market at Php60 per kilo during our visit to Lanao. The farmers in the Cordillera Autonomous Region also have their very special colored rice varieties which they make into rice cake and other preparations. The same is true in Panay. We have seen colored rice varieties in the market. One group is not only collecting colored rices but also old non-colored ones that have excellent eating quality.

Colored rice need not be produced only through the organic way. We once visited the farm of Baby Spowart in Isabela and she was so proud, showing us the excellent stand of her red rice planted on two hectares. The experts who saw the stand of her red rice estimated that each hectare could easily yield 180 cavans of palay. Non-organic colored rice also sells at high prices on the market, practically the same as the organic kind.

She plants rice on 84 hectares and follows the conventional but scientific way. She adequately fertilizes her plants that are irrigated so that they yield high. Growing the colored varieties need not differ from the system of producing the conventional varieties.

It is interesting to note that other countries are also paying much attention to colored rice. In Thailand, for instance, they have what they call the ‘Riceberry’. This was developed by scientists of Kasetsart University for its health benefits. It is claimed to contain a lot of antioxidants and to be good for diabetic persons.

A Thai friend gave Ray Ong, a multi-talented UP Los Baños graduate who knows a lot about anything horticultural, some seeds of Riceberry. In turn, Ray gave the seeds to a friend, Dennis Sy, to plant.

The seeds thrived well under local conditions and in fact Dennis sold some milled Riceberry during a meeting of the Philippine Horticultural Society. Our friend Maripaz Godinez shared with us one pack that she bought and the cooked
Riceberry really tasted great. Smooth and soft.

During a trip to Bangkok, the scientist friends of the late national scientist Ben Vergara served five different colors of glutinous rice that we ate with ripe mangoes. The glutinous varieties included bright red, pink, blue, yellow, and white. If these could be introduced in the Philippines, that would be great.

Riceberry from Thailand grown in the Philippines and sold by Dennis Sy at a garden club meeting. It is claimed to contain a lot of antioxidants and to be
good for diabetic persons.

Possible Project of the DA

One thing that the Department of Agriculture can do to help tap the potentials of colored rices is to collect the different varieties and produce seeds for planting. The different varieties should be field-tested in different areas to find out their
adaptability, yield potential, pest and disease resistance, and many other aspects.

What is very important is to make the seeds for planting available to as many farmers as possible. The DA should help develop the market for colored rices not only locally but also abroad. Clusters of producers could be developed to produce enough volume for commercial marketing. Anyway, a lot of challenges have to addressed squarely if only to tap the potentials of the colored rices.

Meet the Liquid Chef Who Forages for His Ingredients