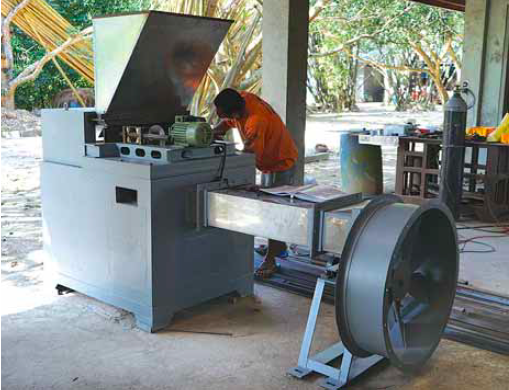 IRRI dRHF unit being manufactured at one of the fabricators of the furnace.

The modest and unremarkable 2-ton Flat Bed Paddy Dryer (FBPD), originally developed and introduced by the University of the Philippines Los Banos (UPLB) in the 1970s, and the subsequent upscaling and improvement from the original design to higher capacity versions of six tons or more by individuals and other agricultural institutions—most notably Philrice with its “Maligaya Flatbed Dryer,”—could still be the best answer to the ever-growing need to address rice postharvest losses in the rural areas of Philippines, especially during the rainy season.

There is an ever-increasing void in the rice postharvest scene that the UPLB flat bed dryer or the Philrice design can fill. The 2-ton UPLB dryer can be “modernized” and the components originally used can be substituted with more durable materials to improve its efficiency. It can also be fitted with a small rice hull furnace that is now becoming more readily available, so that it will be cost-effective to operate.

Consider that even in the summer months, sun drying is progressively becoming uncertain due to erratic weather patterns brought about by climate change. Unexpected downpours occur when least expected. The proper drying of produce under the sun is now increasingly becoming untenable, contributing to poor quality and even total loss of newly harvested paddy.

There is no question that imported recirculating batch paddy dryers are efficient and sophisticated, and the quality of the grain output from these dryers is very high.

However, they also require a certain level of expertise to operate and maintain. With its high level of sophistication comes a high price; these machines are very expensive, and ordinary Filipino rice farmers can only dream of owning one. In addition, most of these re-circulating batch dryers are equipped with kerosene-fired furnaces, which account for their high operating costs. They also need electricity—which does not come cheap—to function properly.

Flat bed dryers, on the other hand, can be installed or built even in areas where electricity is not available using locally available materials and labor. Outfitted with any type of locally fabricated furnace that use rice hull—which is cheap and abundant all over the country—as their primary fuel, they can be operated reasonably and economically by anyone using simple instructions that can be learned in as little as a few hours or at most, a day or two.

The Philrice “Maligaya” flat bed dryer uses an inclined grate furnace that is also fueled by rice hull. Operational costs are therefore much lower compared to a re-circulating batch paddy dryer. Philrice is now promoting a reversible flatbed dryer that they say is more efficient. Both designs are now being outfitted with a rice hull furnace that uses a cyclonic flyash and smoke scrubber that produces clean and smokeless heating air.

Recently, the International Rice Research Institute (IRRI) commercialized and introduced the “semi-automatic” downdraft Rice Hull Furnace (dRHF). Its fuel feed system is controlled by an electronic timer/counter that precisely measures how much and when the next load of ricehull fuel is going to the combustion chamber of the furnace. This auto feed function eliminates the tedious and manual input of rice hull into the furnace.

Another furnace option is the Belonio gasifier. Invented by agricultural engineer Alexis Belonio, a Rolex Awardee for Entrepreneurship, it also uses rice hull fuel to produce heat. Initially, the gasifier converts rice hull into combustible gas through pyrolysis (using heat to decompose organic materials in the absence of oxygen) and the resulting flame is smokeless and clean, comparable to LPG in heating value and appearance.

The widespread adoption of the simple FBPD technology fitted with the abovementioned locally produced furnaces can potentially, once and for all, solve the recurring rice postharvest woes of the ordinary rice farmers and the Philippine rice industry as a whole. Moreover, these furnaces can operate off electrical grid. An electric dynamo can be attached to each system which in turn will power electric motors and electronic components that run the mechanisms of the furnaces. Appropriate solar power systems can likewise be used for this purpose.

In early 2000, the Philippine government, through the Department of Agriculture (DA), embarked on a nationwide distribution of the flat bed dryer technology in the hope of alleviating and eventually eliminating totally the rice postharvest losses in the country. This extensive dispersal has become the centerpiece of the government’s thrust to solve the problems plaguing the industry.

Unfortunately, despite its best efforts, the hope for the benefits that this simple postharvest innovation could bring about has not been fully realized due to a variety of issues related to its distribution and use. It can also be said that these may have been a factor, to some extent, that contributed to the woes of the rice farmers because it remains and still is an unfulfilled undertaking.

There were many issues that contributed significantly to the deficiencies of the FBPD technology since its inception, resulting in its mediocre acceptance among farmers; foremost and most glaring of these is the haphazard, incomplete, or lack of proper information dissemination on the correct use of the technology. One study points to a failure of the implementing agency to provide needed and timely technical support; this contributed greatly to the equipment’s poor performance.

Second, early versions of the FBPDs used kerosene for furnace fuel, which became very expensive during the 1990s and early 2000s, rendering the technology unaffordable for small farmers.

Third, there was a need to improve the overall design of the FBPD to deal with its seeming lack of efficiency, but this was taken for granted or ignored altogether. For example, pressure leaks in the plenum chamber of the FBPD (a crucial aspect central to its efficiency) were never addressed.

Lastly, there is the mindset that since the FBPDs come from the government, these are therefore dole-outs and their upkeep and maintenance are the government’s responsibility as well. The farmers never really ‘owned’ or embraced the technology wholeheartedly as a result. The government for its part may have half-heartedly promoted the technology, which resulted in acceptability failure among the farmers, and technology transfer failure on the part of government. Either way, it was a great loss to the rice industry and the country as a whole.

There are hundreds if not thousands of these FBPDs disseminated and scattered all over the country in the many years that the dispersal program existed. Many of them are slowly rotting away or, if still in use, are not living up to their touted benefits for the rice farmers. They have become “little white elephants” that are one by one dying in the bureaucratic jungles of neglect or farmers’ apathy.

The early high capacity versions of the FBPDs were also equipped with the old inclined grate furnaces without a cyclonic scrubber. Although this early innovation solved the problem of the high price of kerosene, it also ushered in a slew of new issues and problems.

Many rice farmers rightly complain that their paddies either smelled like smoked fish after drying, or were altogether improperly dried, resulting in low quality paddy and milled rice that commanded unprofitable prices in the market. They preferred to dry their produce under the sun or to sell it right away after harvest to rice traders at low prices or even below cost than to use the FBPDs fitted with the old inclined grate furnaces provided by the government.

IRRI dRHF unit being manufactured at one of the fabricators of the furnace.

What Can Be Done?

Government agencies tasked to implement and supervise the flat bed dryer dispersal program should provide more timely support to the recipients of the technology. Recipients must be provided with appropriate training regarding the operation and maintenance of the dryers. Follow-up guidance sessions should be periodically conducted.

The FBPDs must be regularly monitored so that they will always be properly used and their benefits can be ascertained properly and objectively. If more improvements need to be instituted, concerned government agencies should be on hand to set in motion the changes and improvements that will have to be done as the need arises.

Existing FBPDs must be repaired to address pressure leaks in the plenum chambers to make them more efficient and useful before refurbishing with the new furnaces. An inventory inspection must be done to check what needs to be repaired.

FBPD units beyond repair should be replaced and units that can still be costeffectively restored should be properly fixed and maintained.

Additionally, refurbishing should be conducted only after exhaustive assessment by a competent government agency or rice postharvest technicians. There should be unfettered access to records as to the actual number of FBPDs existing and which have been distributed to eliminate duplication.

Replacement of the old inclined grate furnaces with the more efficient and easy to operate furnaces cited here must be done soon to enhance the efficiency and acceptance of flat bed dryer technology. All of the mentioned furnaces here eliminate the smoked-fish smell and the dried paddies are of excellent quality with very high head rice and milling recoveries.

Government extension agencies involved in the dissemination of agricultural technologies should double their efforts to change the mindset of small rice farmers; they need to learn that not all things provided by the government are doleouts, and neither do they come from the personal funds of politicians. Also, these technologies are paid for using the taxes of Filipino citizens like themselves. It must be stressed that their role as recipients of these technologies is to use them properly and protect them for their continued benefit, and that of the population in general as well. There is no better way for the government to assure farmers that they are being taken care of by prompt and compassionate public servants.

Ted P. Torres in his article “Politics, Lack of Capital Contribute to Losses” stated that an average of 15 percent of rice postharvest losses are incurred due to politics and lack of capital to produce paddy. The prevention of this loss could help reduce the country’s needs for rice imports.

FBPD technology is best suited to the Philippines. It is cheaper, locally manufactured, and maintained using indigenous materials and labor compared to expensive and imported drying equipment. All of these furnaces are fabricated out of indigenous and local materials, too.

Rice hull fuel—which is an abundant and renewable biomass—is found all over the rice growing regions in the country. Finally, the success or failure of FBPD technology as a tool for solving rice postharvest problems confronting the rice industry very much depend on the locations where they are situated. Awareness of its benefits and limitations are vital. Commitment from all stakeholders is required. Immediate access is an indispensable aspect for its extensive and effective utilization. Continued and timely monitoring by the proper agency and competent personnel will also add to the success of this government endeavor.

Let us revive the continued and wider adoption of flat bed dryer technology utilizing improved and efficient indigenous rice hull furnaces that are not only carbon neutral but use renewable biomass fuel as well. This will contribute immensely to addressing and solving the problems hounding the postharvest industry in the country.

Meet the Liquid Chef Who Forages for His Ingredients

Carabao Rises to New-Found Importance as Farmers’ ‘Beast of Fortune’