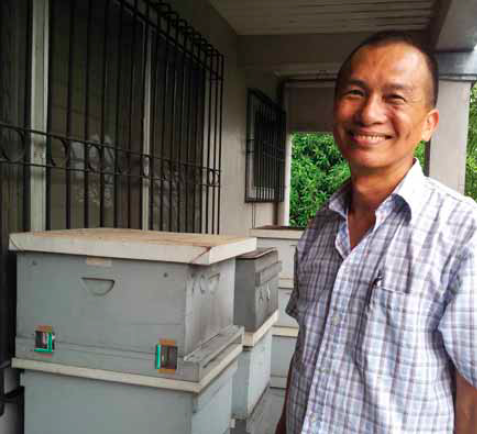 Not all endeavors are successful, but they can still be learning experiences.

I meet William Ong in his four-storey townhouse in the middle of one of the busiest areas of Quezon City. He used to work in construction but is retired now, choosing to spend his time as a real estate agent, a weekend farmer, and a beekeeper. “I just wanted something to pass my time rather than doing nothing, so beekeeping seemed to be a good prospect,” he says.

His daughter found an urban bee farm in Quezon City that offered courses, and Ong spent five Saturdays learning the trade. That was in 2006. “I was expecting that there would be other students, but it came out that I was the only one, so [it was really] one on one,” he says. “We would have theory in the morning and after lunch, the actual handling of the bees.” The rest of the week was spent reading books and articles and preparing questions for the next meeting.

One month after completing the course, Ong bought two European honeybee nucleus hives—starter kits—from Ilog Maria, the country’s most well-known bee farm, in Tagaytay. He converted the second and third floor balconies of his home into an apiary. “I started with only two hives, then expanded to around seven to eight.”

What started as a personal project soon became a side business, with news of it traveling by word of mouth “Once people taste my honey, almost every year [they would call me to say, don’t forget about me (when you produce honey)].”

“In the afternoon, usually around 3 o’clock, you will already see a lot of bees outside,” he says, launching into a mini lecture on the life span and cycle of the composition of honey, and how a queen is made. “The first three days of their lives, the larvae are fed royal jelly. If it is determined that they will make that particular larva into a queen, they will continue to feed it royal jelly. The queen will only take royal jelly, no other food. If they are going to be a worker bee, they will feed it a combination of honey, water, and pollen, and maybe some other substances,” he says.

He talks about colony collapse disorder (CCD), the phenomenon where the majority of worker bees leave a healthy queen and colony for no apparent reason, one whose continuous occurrence has been alarming scientists for almost a decade. “So for the past how many years… the bees are disappearing, they still do not know the cause.

Initially, they thought it was the emergence of so many cell sites. They thought that the radiation emitted by these cell sites confuse the bees so they don’t know how to go back home. Later, they believed that it’s very likely pesticides, which I believe plays a very large part. [The purpose of] pesticides is to kill the insects that [go] to the plant. If bees collect nectar and pollen from flowers, [if there is a fresh] application of pesticides, [many bees die].”

“The bees that go out to get nectar, on the way home, when they put the nectar in the stomach, it mixes with an enzyme. Upon reaching the hive, they pass it to other house bees who also swallow the nectar and mix it with their own enzymes before putting it in the comb. “So honey isn’t simply just nectar.”

When Ong is interested in something, his fascination reaches near obsessiveness. He must learn everything he can about it. He is not afraid of research. He bought books and pored over articles, websites, and videos dedicated to beekeeping. He credits a considerable chunk of his education to YouTube. “I don’t know if you’ve read, but in the States right now, they are encouraging people to have rooftop beehives because they know the importance of bees as pollinators. 80% of the food production in the US is pollinated by bees,” he says.

“Of course, I was also convinced with the benefits of honey, that’s why [I was] thinking, okay, this is going to be a product where people are going to benefit from consuming it, and also if I have this at home or in a farm, I don’t have to leave the farm.”

Honey harvest season in the Philippines is from March to June. The bees produce honey year round, but not in the excess for human consumption outside those months. “How much honey are you able to harvest? It would depend on how strong your colony is,” Ong says. “Bees have to be strong so they won’t cannibalize each other and can repel predators like wasps and ants.”

One hive can yield up to 50 kilos of honey. Ong jokes that with beekeeping, people say, “…if you do not have back problems, sooner or later, you will,” I ask to see his bees. His face falls, but just for a bit as he says he lost two queens to ant attacks. It took place quickly, and there was nothing he could do. Fire ants from a nearby tree had gained access to the hives via a stray branch that reached onto the balcony. Both his queens perished, and the colony was in too much shock to create new ones to replace them.

He explains that if a queen dies, the worker bees can be traumatized for as long as four to five days. “Can you imagine, four or five ants, [pulling them, taking them as though they were food]?” They likely didn’t have the will to think about producing a new queen, though they can easily do so with day-old larva; if anything happens to her, the whole hive immediately knows. But if there isn’t any day-old larva available? Nothing happens.

Still, when I ask to take a picture, he smiles for the camera. As of the interview, he was currently on the waitlist to get new queens from UP Los Banos, the only institution allowed to import bees. He misses beekeeping. “If you look at it as a hobby… beekeeping [is great]. You learn, you enjoy, you keep yourself busy, you earn,” he says. He adds that in the past, he often just sat outside the hives, observing the everyday lives of the bees. “[You see them] coming in and going out, you can see them coming in [bringing] pollen, different colors.”

But even so, he has mixed feelings about his future as a beekeeper, and about bees in general. “Unless [the situation improves], maybe within a year or so, hopefully [scientists or the industry will find a remedy for or discover the] actual cause of the disappearing bees; otherwise, [when I start again, I won’t be able to multiply them]; it will just be a hobby…[such a waste].”

Don’t Let Your Loved Ones Fall Victim to Antimicrobial Resistance