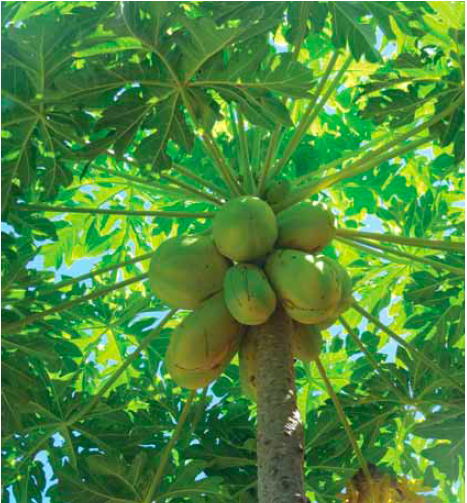 This golden papaya must be more than two years old, yet it is still healthy and fruitful, unaffected by disease.

We were with a provincial tourism official and some agriculturists when we visited Lanao del Norte last December looking for interesting topics to write about. Then someone asked us what should be done to promote agritourism in the province.

Well, we told the group that tourists will go to a place where they can see or find something new, something they have not seen elsewhere. Many people will visit a farm that is rewarding in a number of ways. They could pick up practical ideas in farming. They could discover new varieties of crops that could also be profitable for them to produce. Other farm tourists could just be looking for wholesome recreational activities that the whole family can enjoy.

And then along the road going to a village, we pointed to a couple of papaya trees with golden fruits. Yes, their fruits, including the very young ones, were golden yellow. We had seen this long before in a hobbyist’s garden in Quezon City, but it was only at this time that we saw it again, and it was in a barangay in Tubod, the capital town of Lanao del Norte.

A lawyer who was with us is a farmer at heart. And when we went back from our original destination, he insisted that we pass by the papaya trees with golden fruits. He wanted to see the fruits up close and if possible, get some seeds for planting.

That, we did. And the lady owner, Mrs. Teresita Bartolo, was so accommodating. Fortunately, there was one ripe fruit in one of the trees, which she gracefully offered for us to taste. Its flesh was a very attractive orange-red, thick, sweet, and juicy. The fruit we tasted was 2.5 kilos but Mrs. Bartolo said that they had harvested fruits weighing five to seven kilos each.

We then told our companions that if the golden papaya had attracted the lawyer in our group, that means it should also attract many other people. If a farm, for instance, could plant 200 or even a thousand trees, people who hear about the farm would also like to visit the unusual papaya. And that could bring business to the owner of the farm. He or she could make money selling the fruits to visitors. He or she could also sell seeds or ready-to-plant seedlings.

Of course, for a farm tour destination to attract as many visitors as possible, there should be other attractions. These could be other crop varieties or interesting farm animals like the Paraoakan chicken from Palawan, native pigs, fancy fowls, and more.

One can learn some lessons from Ronald Costales of Majayjay, Laguna, the award-winning organic farmer. For a fee, people go to his place for training in integrated organic farming. The short course includes growing organic vegetables, formulation of organic fertilizers, raising organic pigs and chickens, and much more. Families also go there on weekends to partake of the fresh salad and enjoy the mild climate in Majayjay.

Now you see, there are many things that can attract visitors to a farm. And the unusual golden papaya could just be one of them. People will enjoy taking their pictures with the trees that are heavily laden with golden fruits.

This Law Will Ban Stirrers and Straws in Metro Manila