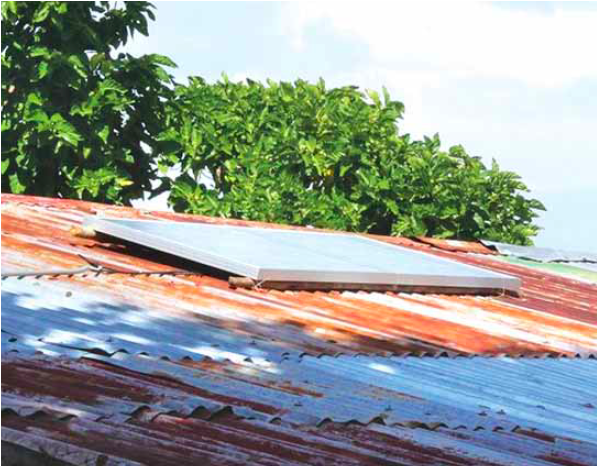 Just one solar panel can make a big difference to a small community.

Over the past year or so, the residents of Panalsagon Island off Barangay Vito in Cadiz City were not able to enjoy the benefit of having electricity on their island.

They relied on small kerosene lanterns to light their homes, and battery-powered transistor radios to listen to local news broadcasts. The children of the villagers, who rely solely on fishing for their livelihood, encountered difficulties with school as it was very hard to study at night. In addition, they had to travel by boat to get to their schools on the nearby island of Bulanon.

The mangrove seedlings which the residents planted are now growing around the island.

In addition, the harvest of the local fishermen started to dwindle due to the destruction of the mangroves around their island. The livelihoods and lifestyles of the 50 households on the island, which is composed of around 350 individuals, will be compromised if the mangroves will continue to deteriorate.

But with the recent installation of a single solar panel on the house of one of the villagers, the situation began to improve—and the mangroves around the 27-hectare island were also protected. How was all this achieved?

A Modest but Significant Project

The project was conceptualized by Aladino “Nonoy” Moraca, executive director of the Ecological and Agricultural Development Foundation, Incorporated (EcoAgri), which is based in Bacolod City.

The harvest of the very tasty sikad-sikad started to increase following the preservation of the
mangroves around Panalsagon Island.

Moraca introduced the concept to his fellow Ph.D. students in Technology Management at the Northern Negros State College of Science and Technology or NONESCOST. They, in turn, initiated the project under the guidance of their professor, Dr. Jocelyn Bantigue after a lengthy discussion and deliberation about the feasibility of the modest project before it could be implemented.

Financing the project became a stumbling block; while the students decided to contribute around Php2,000 each, the total amount fell short of what they needed. EcoAgri and the RU Foundry and Machine Shop Corporation in Bacolod City, owned by Ramon Uy Sr., assumed the remaining balance to make sure that the project would be implemented after taking into consideration the benefits it could bring to the residents of Panalsagon Island.

The idea was to look for a qualified person on the island who would directly benefit from the single solar panel, together with its peripherals, but in exchange, this person would lead the efforts to conserve the mangroves around the island, which are the spawning grounds of danggit and the shellfish which is locally known as ‘sikad-sikad’.

This is part of the 14,000 mangrove propagules which are ready for replanting around
Panalsagon Island.

Upon the completion of the screening process, the modest project was awarded to 36-year-old Conrado Cualbar, the purok chairperson on Panalsagon Island. As the elected purok chairperson, Cualbar has led various projects which have directly benefited the island villagers for the past five years, including a regular coastal clean-up drive, mangrove protection and care, and maintaining peace and order around the island.

The implementation of the modest project was in partnership with the Extension and Agriculture Departments of NONESCOST, and the barangay level of local government unit in the area, together with the RU Foundry and Machine Shop Corporation and EcoAgri as technical partners.

Under a Memorandum of Understanding (MOU), Cualbar will continue to lead the conservation of the mangroves around the island and maintain a propagule nursery where the islanders now have at least 14,000 seedlings that are ready for planting.

With the single solar panel in place at Cualbar’s house, the residents can now avail themselves of charging services for their cellular phones with the payment of a minimal fee of Php 5 each. The proceeds will be used for the maintenance of the solar panel and its peripherals, like the solar power inverter, solar charge controller, and the rechargeable battery.

It is a welcome development as in the past, the islanders had to travel by boat to Barangay Vito, about nine kilometers away, and pay Php 10 each for the charging of their cellular phones, plus the boat fare.

Cualbar shows EcoAgri Executive Director Aladino ‘Nonoy’ Moraca how they take care of the mangrove
propagules at their nursery on the island.

The residents of Panalsagon can now watch television in Cualbar’s house, and gather in front of it at night because it is lit by an LED bulb.

Cualbar says the grades of his school-age children— 14-year-old Catherine and 12-year-old Daniel Vincent—have considerably improved because they can now study comfortably study at night. Also, his 35-year-old wife Rowena can now comfortably finish her household chores at night.

But Cualbar emphasized that the main benefit that the islanders now enjoy is the protection of the mangroves around the island, which has resulted in an increase in their danggit harvest.

The regular coastal clean-up drive also resulted in the proliferation of sea grass around the island; these feed the danggit and sikad-sikad.

And though the single solar panel can only generate a limited amount of electricity, the island villagers were able to celebrate the Christmas season in front of a small but lighted Christmas tree—the very first time they saw one in their area after so many years of dark Christmases.