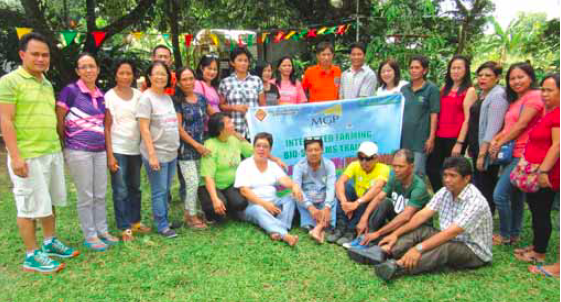 The trainees from Aroroy, Masbate who trained for five days on improved farming practices at the AANI Urban Farm in Antipolo City.

Host barangays of a huge mining firm in Aroroy, Masbate are using their allocations for social development and management programs to pursue livelihood projects in agriculture for their residents.

The latest program is to teach the men and women from the various barangays to engage in farming and gardening that will enable them to produce much of their own food and at the same time, generate income for their families’ benefit.

One of the subjects taken up was modern techniques of vegetable production. Romy Velasco, an agriculturist who has extensive experience with the East-West Seed Company as a technician, was the resource person.

The trainees from Aroroy, Masbate who trained for five days on improved farming practices at the
AANI Urban Farm in Antipolo City.

He taught the participants, through lectures and a demonstration, the basics of good agricultural practices in vegetable production. These include the use of improved seeds, use of seedling trays in germinating seeds, methods of hardening the seedlings, and other techniques covering up to harvesting and marketing.

Velasco did not only teach the participants scientific production, he also gave pointers in timing production to maximize the opportunity for making a profit. He also cited possible moneymaking projects for vegetables; for instance, producing seedlings for sale to other farmers can be a lucrative project. In Bulacan, he said, there are enterprising men and women who grow seedlings and selling them at a profit. One seed of hybrid papaya, for instance, may cost Php7. When it is grown in the nursery for one month or so, it could retail for Php30-35.

Another topic that could make farming in Masbate more profitable is producing organic fertilizer through vermiculture. This is the culture of earthworms that transform manure and many other farm wastes into potent organic fertilizer.

Pol Rubia, AANI operations manager who is from Aroroy, pointed out that in Masbate, there are cattle ranches. The cattle manure could be collected and used to feed the earthworms so that the manure can be converted into a much more effective organic fertilizer than in its pure form.

Producing vermicast or vermicompost can also be an income-generating project. One sack of 50 kilos could be sold in the province for Php250 or thereabouts. Vermicast is very good for vegetables, rice, corn, and many other crops.

Vermicast can be applied directly to the soil. However, it can also be converted into vermitea and sprayed on the leaves of vegetables and other crops. It has been observed that plants sprayed with vermitea are less susceptible to pests and diseases.

Another topic that was taken up was quail raising. The resource person was Jeffrey de la Cruz, an expert quail technician from the Agrichexers, which manufactures the bulk of quail feeds in the country. Quail raising has a number of advantages. It is a project that can be undertaken right at home, with the project requiring only little growing space. It also requires more modest capital compared to other livestock projects such as cattle raising.

The quail raiser does not have to wait for a long time before the quails start laying eggs because their first eggs can be had as early as 35 days from hatching. Quail eggs are nutritious and very nice to eat, and they are also very affordable.

The trainees were also updated on the latest technique in pig production. This is the use of pigpens that don’t have concrete floors. The flooring is composed of several inches of rice hull and other materials that are available on the farm. The pigs are not bathed at all yet the piggery does not have the usual foul odor of ordinary piggeries because effective microorganisms are sprayed to arrest ammonia.

The use of fermented feeds makes hog raising economical. The feeds could include shredded water hyacinth, napier, and many other forage crops that are mixed with rice bran, copra, and soya then fermented for 15 days before feeding. There are six other host barangays for the Masbate Gold Project in Aroroy. It is possible they will also be sending their farmers to train on improved farming practices at the AANI Urban Farm in Antipolo City.

AANI has been conducting technology transfer through seminars and workshops as well as through farm tours. It was recently cited as one of the “20 Most Outstanding Community Enterprises” by the 2015 Villar Sipag Awards on Poverty Reduction.

The Benefits of a Single Solar Panel

An Urban Farm Grown In the Middle of Tondo