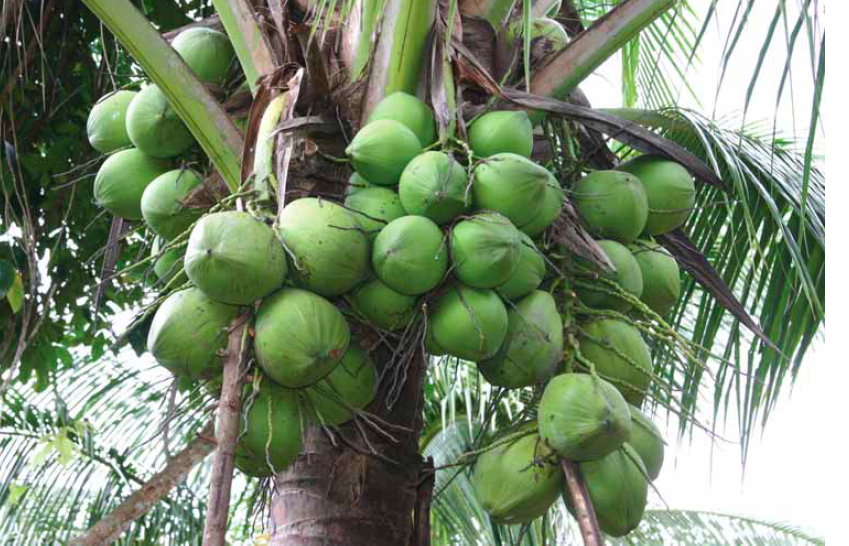 The Philippine coconut industry occupies 3.56 million hectares (ha), which is almost one-third of the cultivated agricultural lands in the country. Yet the yield of the coconut trees is very low. The national average vegetable oil yield is less than one ton/ha per year. This is below the potential yield of coconut of over four tons/ha per year.

Many recommendations have been offered as a way of increasing coconut farm productivity and farmers’ incomes with the aim of freeing coconut farmers from poverty. Among these are crop diversification of coconut lands to other crops,the integration of livestock, product diversification, and value adding.All these recommendations are useful but noneprovide a solution to the problem of the very low yield of the coconut trees, which is the major cause of the farmers’ low incomes, which lead to poverty.

This article (from a research paper) shows the tremendous potential for increasing farmers’ incomes when the yield of coconut is increased. The author carried out research on the causes of low yield and productivity of the coconut trees in relation to his work as a consultant of the United States Agency for International Development (USAID) through the GEM (Growth with Equity in Mindanao) program to come up with a blueprint for the rehabilitation of coconut plantations(and towards overcoming poverty in the affected communities) severely damaged by super typhoons Pablo in the province of Davao Oriental and Yolanda in the province of Leyte.

Both provinces are leading producers of coconut, yet are also among the provinces having the highest incidence of poverty in the country. While the recommendation to USAID involves the utilization and diversification of many crops, coconut was given emphasis. This article, a modification of the report submitted to the USAID, discusses only the coconut industry and may not reflect the opinion of USAID. The author assumes full responsibility for the contents of this article.

Parallel with the research done on coconut, the author also conducted research to identify the factors responsible for the high yield and productivity of Malaysia’s 5.5 million ha of oil palm, which has successfully reduced the incidence of poverty in that country.

More than 60% of cultivated land in Malaysia is devoted to oil palm.The poverty incidence in Malaysia is at 3.5%, compared to that of the Philippines, which is over 25%.This documentation is in connection with the book he is writing to serve as reference of the current and would-be oil palm farmers in the Philippines.

Oil palm is a relatively new crop to many Filipino farmers; they need a techno guide to help them use modern production systems.

In the coconut industry, there are three major policies that continue to make coconut farmers poorer through reductions in the yield and productivity of coconut trees. These are policies related to the cutting and replanting of old coconut trees; a coconut expansion program that does not address how to alleviate poverty; and the abandonment of the mass production of hybrid coconut for distribution and planting.

These policies can be revised following the Malaysian model so that Philippine coconut farmers can prosper.

In the Philippines, there are two laws—the Coconut Preservation Act of 1995 and RA 8048—which prohibit coconut farmers from cutting coconut trees even when the trees are old and of low yield unless the farmers replant the trees at their own expense. Most farmers, however, don’t have the resources to cut and replant, and so they don’t cut and replant the trees of increasing senility. The Coconut Preservation Act is effective in that it has preserved thousands, possibly millions, of hectares of senile coconut trees—but these provide very little income to the farmers.

A large portion of the areas where these senile coconut trees are located are fertile lands practically turned into wastelands due to low productivity; this is a contributing factor to the overall low land productivity in the country.

According to the Asian Development Bank (ADB), the Philippines has a land productivity of US$350 compared to Thailand (US$ 1,050) and Malaysia (US$ 1,600). It is a paradox: the country is running out of fertile land resources to produce food for its increasing population yet there are thousands if not millions of hectares of fertile land sitting idle because of the Coconut Preservation Act.

In contrast, the Malaysian government is successfully implementing state policy through the Malaysian Palm Oil Board (MPOB) by providing small farmers with five ha or less with financial incentives to cut the oil palm trees at the onset of decreasing productivity—when these reach 25 years and older—and clear the lands for replanting. The Malaysian government also gives the farmers the means to secure high yielding hybrid seedlings, keep the farm weed-free, and apply adequate fertilizer.

This results in the replanting of hybrid oil palm which are of increasingly higher yield than the previous crop. Farmers’ incomes continue to increase as a result.

If they wish to apply the Malaysian model for oil palm to coconut, the Philippine government should provide farmers with financial incentives to cut the low-yielding, old, and senile coconut trees,and give them the capacity to plant high-yielding planting materials, apply fertilizer, and keep the farm free from weeds. In doing so, the government will not only preserve coconut trees and the coconut industry, but also empower farmers by giving them the capacity to increase their incomes. When coconut farmers have more money to spend, they can buy many household goods, housing materials, food, and furniture. New community businesses shall emerge, which can be a source of higher government taxation revenues for use in improving government rural services.

The Philippine Coconut Authority (PCA) narrowed down the farmers’ support to the expansion of the areas devoted to coconut either by making traditional seedlings free to farmers or by giving them an incentive pay of PhP35for each coconut seedling planted by farmers putting up new coconut farms. Farmers use any planting materials to get the incentive pay and do not select these based on the duration of maturity and yield. Thus farmers are not capacitated
to adequately prepare fields for planting, to fertilize the weeded palm trees, and apply other appropriate production practices.

They are also not provided with well-trained agronomic and extension officers to convince them to use fertilizers, much less those who will capacitate farmers to use fertilizer and apply good agricultural practices.This results in the planting of coconut with late maturity and low yield (less than a ton of vegetable oil/ha per year). While the area devoted to coconut is expanded, the number of coconut farmers who are poor also increases.

The average income of these farmers is between Php10,000 to Php15,000/ha per year.New coconut farmers availing themselves of the PCA expansion incentives simply add to the long list of poor farmers with incomes below the poverty threshold level.

In contrast, it is the policy of the Malaysian government through the MPOB to capacitate new oil palm farmers with financial incentives so that they will adequately prepare the field before planting with quality and high yielding hybrid oil palm seedlings. The government provides incentives for adequate weeding and the application of fertilizer to ensure early maturity and high yields.

Well-trained government agronomists and extension officers provide services to the oil palm farmers. Consequently, the oil palm trees come to production early, just 26 months after planting, with high yields of over four tons of vegetable oil per year.The income of the oil palm farmers is high—over Php75,000/ha per year or an income of Php375,000/year for a farm of five ha.This means that a Malaysian farmer planting oil palm for the first time joins an increasing number of farmers who prosper.

By applying the Malaysian model for oil palm to coconut, the government should enlarge the package of incentives to the farmers for high coconut yields and income. The Philippine government should help the coconut farmers plant HYVs or hybrids, keep the field weed-free and apply fertilizer. This is expected to bring about a progressive increase in the yield of coconut, and consequently, to the incomes of coconut farmers. Countryside poverty will be reduced.

An increasing quantity of coconut oil will be produced to meet the demand for it on the world market.This will also help the country overcome the current huge vegetable oil shortage of the country, now valued at PhP54 billion.

This shortage is overcome by importing palm oil from Malaysia and Indonesia, a system that benefits Malaysian and not Filipino farmers.

The governing board of the Philippine Coconut Authority (PCA) approved a policy that virtually abandoned the research,production, and distribution of hybrid coconut seedlings to farmers during the early years of the Aquino government. It was partially resumed when former senator Francis “Kiko” Pangilinan took over the chairmanship of the PCA governing board. However, the current hybrid program is at insignificant levels, not enough to make a change in the coconut industry.

Consequently, the PCA buys and distributes coconut seedlings which are generally lower yielding, with a long immaturity period of five to seven years and a low yield. This results in low incomes for farmers, placing them below the poverty threshold level and perpetuating poverty in the areas planted to coconut. The abandonment of the hybrid program deprives coconut farmers of hybrid materials to grow, those with higher yield potentials that can give them incomes similar to those of farmers growing hybrid (HYVs) rice, corn, oil palm, and other crops. Research on increasing the yield of coconut is likewise neglected.

Through extensive research, the yield of the oil palm hybrid is continually being pushed upward. Due to this policy, oil palm plantations in Malaysia today use only the latest high yielding hybrid materials; they use none of the traditional types or varieties grown prior to the 1960s with low yields of less than a ton/ha per year. The Malaysian government also gives farmers access to inputs like fertilizers, so the potential of the hybrid to produce high yields is attained. Oil palm yields in Malaysia are at the high levels of four tons/ha per year; thus, farmers’ incomes are high above the poverty level.

To summarize, the Malaysian oil palm policies are unilaterally focused on increasing oil palm yield in order to increase farmers’ income and overcome poverty. The Philippine government is focused on the preservation of the areas planted to coconut trees regardless of yield and production, and on the expansion of the plantation without due consideration for increasing yields—a move that can increase incomes and help farmers overcome poverty. It also abandoned the hybrid program that provided farmers with the best opportunity to increase yield and overcome poverty.

Coming in Part II, in the February 2016 issue of Agriculture Magazine: Why the Philippine Coconut Hybridization Program should be restored and expanded. The discussion will provide the justification for why the coconut industry should return and strengthen the coconut hybridization program with components of research, mass production, and distribution of coconut hybrid seedlings to farmers.

Side by side with the distribution of hybrids should be the capacitation of the farmers to use fertilizer. In doing so, coconut can become a tool in transforming the coconut farmers’ lot from poverty to prosperity.

An Urban Farm Grown In the Middle of Tondo