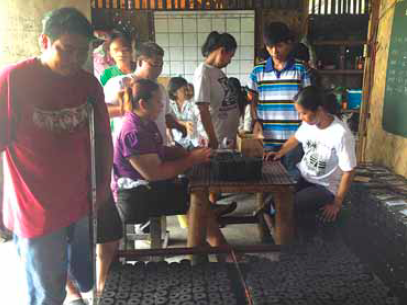 Local government units (LGUs) have been pressed by the Ecosystems Research and Development Bureau (ERDB) to adopt a solid waste management system through charcoal briquetting that can earn for them equivalent “carbon credits.”

Charcoal briquetting will also enable many LGUs to comply with the Solid Waste Management Act (SWMA) or Republic Act 9003. Many LGUs have not yet complied with RA 9003 almost 20 years since it was ratified.

Intensive training and a possible supply chain linkage is being offered by the ERDB to LGUs through a charcoal briquetting program. This produces charcoal without having to cut trees. Thus, it can earn for LGUs equivalent “carbon credits” under possible new carbon finance schemes of the United Nations Framework Convention on Climate Change or UNFCCC.

ERDB charcoal is more cost-efficient than ordinary charcoal and emits a steady heat with low clean flame. The charcoal is easy to ignite.

ERDB executive director Dr. Henry A. Adornado expressed satisfaction that the ERDB’s research on the production of charcoal briquette has reached a success level for small communities, including one in Barangay Lower Bicutan C6,
Taguig City.

“We are open to sharing the technology to any sector interested in learning from us. We provide [training sessions] and free [demonstrations] as part of our collaborative program in technology transfer and extension,” said Adornado.

LGUs can also raise funding from this program, which fits under a potential new UNFCCC (United Nations Framework Convention on Climate Change) financing incentive for reducing deforestation called “Reducing Emissions from Deforestation and Forest Degradation (REDD Plus).” It is expected to be approved by the end of 2015.

The need for fuelwood in many Filipino households has led charcoal-fuelwood producers to cut trees. They destroy forests, including virgin forests, and emit carbon dioxiode in their operations.

The ERDB initiated training for a program on charcoal briquetting in Brgy. Lower Bicutan C6 that has generated jobs for persons with disability (PWDs). Members of the Samahan ng May Kapansanan sa Taguig (SAMAKAT) are using ERDB’s charcoal briquetting technology as an environment friendly way to supply wood for cooking in Taguig parish communities. After intensive skills training, the SAMAKAT PWDs acquired the ERDB-developed machinery through the financial assistance of Pondo Pinoy of a Taguig Catholic parish.

The machines they availed themselves of were a carbonizer, mixer, briquettor, and dryer. Among the jobs for 12 PWDs were raw material gathering and simple machinery operation. Women PWDs were also hired for packaging.

The PWDs are now renting a small charcoal briquette factory in an estimated 200 square meter site in Taguig City. A 24-piece briquettte is sold at Php20 per pack and generates an income of around R 100 per day for each PWD, according to SAMAKAT president Mario Galvez. He added that charcoal briquetting has given new lives to people him, an orthopedic PWD, and that they can now be more confident because they are making a contribution to society.

“We’re glad that this success story can inspire many other [grassroots] communities to venture into charcoal briquetting. If persons with disabilities can succeed [with] it, why can’t anyone else?” said Adornado.

A training session on producing environment-friendly charcoal was held three years ago by ERDB Researcher Engr. Santiago Baconguis Jr., who introduced the techniques for coming up with charcoal briquettes from various biodegradable waste materials.

These waste materials now have considerable economic value. Among the waste materials that SAMAKAT uses are those from buko juice merchants and water hyacinths (water lily) directly gathered from the Laguna Lake.

Compliance with the SWMA has been a challenge for many municipal, city and provincial governments, but the ERDB can be of assistance in helping manage their wastes using DENR-ERDB’s CBT.

Charcoal briquettes created using ERDB technology can be considered a renewable energy (RE) source, similar to biomass, which mostly comes from waste materials. They are also more cost-efficient than unprocessed fuelwood. Its production should receive incentives from RE programs.

Unlike fossil fuel (petroleum) energy sources that can be depleted, charcoal production can be replenished, much like other RE sources (solar, wind, biomass).

An ERDB study indicated “charcoal briquettes from wood and non-wood biomass wastes such as leaves, twigs, branches, and other cellulosic biomass can lessen wood and wood charcoal consumption of poultry farms, households, and domestic business.”

In a project study involving the use of 300 kilos per day of biomass waste, ERDB reported that the investment here results in a 100 percent internal rate of return, making it a very viable business. “Positive externalities are the potential for carbon sequestration (1.53 million kilos in 10 years), [the] landscape amenities it will provide, [and] protection of biodiversity (flora and fauna), among others,” said the ERDB.

The Philippines’ renewable energy (RE) projects such as the Bangui wind plant in Ilocos Norte have benefited from carbon credits from UNFCCC-initiated agreements.

LGUs and other entities may earn new financing from a program being introduced by UNFCCC negotiators called the REDD Plus (Reducing Emissions from Deforestation and Forest Degradation). The original carbon credits gave financing for projects that reduce emissions of carbon dioxide and other greenhouse gases. The REDD Plus is specifically targeted at giving potential financial incentives for reducing deforestation. It is expected to be approved by end-2015.

Fuelwood in general is extensively used not only in Filipino households but also in small rural businesses such as bakeries and restaurants, it has been found in a study. Studies indicated much of forest destruction is due to the need for cooking fuel. However, this has caused massive forest degradation through a highly destructive technique: ‘kaingin’ or the burning of forests sans any replacement of the trees.

For instance, in Cebu, the cutting of trees has been noted to be a major cause of deforestation, particularly of primary forests. “The province of Cebu is now in the stage where firewood is becoming scarce. The situation is so severe that the remaining forest resources are exploited at least three times their sustainable yield,” stated a Department of Environment and Natural Resources report.

Amino Acids and Their Role in Drought Resistance

The Importance of Iron Supplements to Newborn Pigs