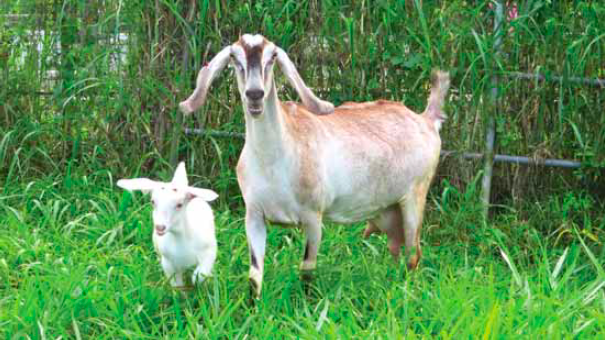 A purebred American Nubian doe with her Anglo-Saanen kid sired by an American Saanen buck. The kid is showing hybrid vigor.

It takes private initiative to come up with a viable system of dairy goat production in the tropics through a scientific approach that involves close observation and experimentation.

The guys who now believe that dairy goat production is possible under the tropical conditions of the Philippines are Rene Almeda and his two sons Art and Toti of the Alaminos Goat Farm in Laguna. For eight years now, they have been raising dairy goats and are succeeding very well.

An imported American Nubian doe with her triplet buckling kids.

The father-andsons team now believe three important factors are needed in order to succeed in producing goat’s milk commercially under local conditions. Very important is genetics. This means that the herd must have superior bloodlines, no matter how high the high cost. The Almedas, for instance, did not mind importing a pedigreed Saanen buck from the US that cost more than US$ 4,000 to bring to the Philippines. The high cost is now more
than recovered, thanks to the orders for the progeny of the champion buck.

Rocky Almeda, the young future milkman of Alaminos, and Emily bottle-feeding young early-weaned Anglo-Saanen cross bucklings. The kids were early-weaned from their mother so that the latter can be milked early for the production of Alaminos Milk Star goat’s milk.

A purebred American Nubian doe with her Anglo-Saanen kid sired by an American Saanen buck. The kid is showing hybrid vigor.

Just as important as genetics and strict record keeping is proper nutrition that is affordable. The Almedas’ so-called Salad Garden for goats has proven to be highly effective in cutting feed costs. The salad garden consists of forage crops like indigofera, pakchong 1 napier, mulato II grass, mombasa (another grass), malunggay, and mulberry.

After studying their records, the Almedas have concluded that 40 percent pelletized feeds and 60 percent green forage is best for their herd. The milking goats are given 1.2 kilos of pellets and 1.8 kilos of green forage daily. The cost is less than Php20 per day. The goats usually give two kilos of milk or more per day, so the cost of feed is easily recovered.

The main ingredient of the pellets, which the Almedas also make, is indigofera, a leguminous tree that is very hardy. Every 45 days, the leafy twigs are harvested, either for fresh feeding or for making into leaf meal for pelletizing. By the way, the Almedas consider as their solid contribution to goat raising in the Philippines their pioneering work in raising awareness about indigofera. This small leguminous tree is a good source of protein and energy for small ruminants. And Rene is very happy that indigofera has gained wide acceptance from goat raisers all over the Philippines.

By the way, Rene Almeda also believes that the good nutrition they have been giving their animals has resulted in multiple kidding of their breeders; they have even produced triplets.

After observing the performance of their goat herd, Rene strongly believes in the hybrid vigor of crosses, which perform much better that the purebreds under the tropical conditions of the Philippines.

What is very important, however, is that the purebred parent stocks of both male and female lines be of superior genetics. They had that in mind when they imported a hundred Saanen dairy goats from Tasmania and Anglo Nubians from Queensland, both in Australia. Saanen is the most preferred dairy goat while the Anglo Nubians were chosen for both their meat and milk.

Constant selection of the highperforming animals in the herd has been the Almedas’ main objective. In time, they came up with locally born animals that adapted well to local conditions. To further boost the quality of the progeny of their breeders, they imported the US$ 4,000 buck from the United States.

Rene Almeda admits that doing dairy breed improvement takes a lot of time and patience, and involves much investment. AGF has invested heavily in bringing in American Nubian dairy goats from top dairy breeders in the United States.

Breeding Anglo Nubians adapted to the tropical climate was undertaken full time with the Alaminos Anglo Dairy Line (AADL) breed improvement program. They are the female line of the Anglo-Saanen cross. In the same manner, breeding Saanen through years of selection with emphasis on adaptability to the tropical climate has also been their constant goal.

Due to the long time AGF has spent breeding dairy goats, they have established a database of the distinct dairy characteristics of the different families of dairy goats being bred at AGF. And Rene Almeda stresses that as AGF moves forward in their dairy breed improvement program, strict selection is its main tool in using the records collected through the years.

Pregnant Oberhasli doelings. Their progeny will be crossed with Saanen-Anglo to produce triple cross dairy goats.

Rene is upbeat in reporting that for the 2016 kidding season, which started in December 2015, they are experiencing multiple kidding. The rains that were well distributed in 2015 benefited the forage crops in their Salad Garden. He added that 2015 will be recorded as one of the best years in feeding fresh indigofera, pakchong, mombasa, mulato II, signal grass, mulberry, malunggay and Florida napier grass in Alaminos Goat Farm.

The multiple kidding being recorded at AGF would indicate a correlation of good goat nutrition with success in goat dairying under the tropical climate of the Philippines, according to Rene. Hybrid vigor, which the Anglo-Saanen cross brings to the table, plus good goat nutrition will spell success for AGF’s operation in 2016, he adds.

Rocky Almeda, the young future milkman of Alaminos, and Emily bottle-feeding young early-weaned Anglo-Saanen cross bucklings. The kids were early-weaned from their mother so that the latter can be milked early for the production of Alaminos Milk Star goat’s milk.

In their desire to bring doable goat raising technology to the countryside, Alaminos Goat Farm has become a private sector partner of the Department of Agriculture’s Region 8 sub-department in a program called SAIS-RED. The acronym stands for Samar Island Small Ruminant Enterprise Development Project.

Under this project, farmer beneficiaries take care of dairy goats sourced from AGF. Alaminos Goat Farm supplied the planting materials of all the forage crops being grown in the AGF salad garden. The Almedas also shared their feed pelletizing technology.

Rene Almeda is optimistic that goat dairying in the countryside can succeed with the doable technologies that they are sharing with the farmers under the guidance of the SAIS-RED project manager – Assistant Regional Director Wilson Cerbito. If the project is successful, it could be the key to faster development of goat dairying in the Philippines.

The Importance of Iron Supplements to Newborn Pigs

Special Durian Must be Protected, Multiplied