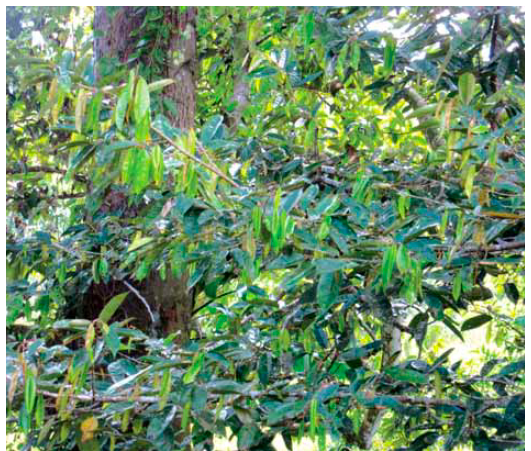 On December 2015 we came face to face—so to speak—with a majestic 30-year-old durian tree in a 36-hectare farm owned by the Dimaporo family in Matungao, Lanao del Norte. The tree is considered very special for very good reasons.

To reach the farm means two hours of negotiating well-paved as well as bumpy dirt roads, and then we had to contend with a thick growth of shoulder-high weeds to get near the tree. But all the efforts were worth it.

Raul Maghilom, an agriculturist working for the Dimaporo family, related to us how special the durian tree is, and they have named it Durian Dimaporo Special or simply DDS.

They called it Special because of its fruits’ superior eating quality. They compared its taste with such favorites as Puyat, Chanee, Monthong, or Golden Pillow of Thailand and other introduced varieties. DDS simply stands out in terms of its taste, according to Maghilom. Its golden yellow flesh is very attractive, too.

The fruit is different from most varieties not only in taste but also in size and shape. It is very round like a basketball and is big; it weighs five to seven kilos each.

If I were the owner of the tree, I will undertake a special project to perpetuate the special qualities of DDS. It should be a profitable, sustainable project that will benefit other farmers and all durian-loving consumers in the long term.

This is what I would do. I will make the tree really special. I will eliminate the weeds and bushes all around the DDS tree, say at a perimeter of 10 meters beyond the spread of the canopy. I will even put a sturdy fence all around so no stray animals will intrude that could damage the tree. I will put up a special marker proclaiming that this particular durian tree is a very special treasure.

I will see to it that the tree gets adequate nutrients to maintain its good health and enable it to produce a reasonable amount of fruits. To do this, I will spread at least 8 sacks of processed organic fertilizer all under its canopy. I will even reinforce that with complete chemical fertilizer containing micronutrients. No, I will not skimp on fertilizers. I will see to it that there is no waterlogging. And I will also make sure that when there is a dry spell, the tree should be watered adequately.

DDS has to be Multiplied

There is only one DDS tree among 300 or so durian trees in the farm. It is therefore very urgent that before anything untoward happens to the tree—like being struck by lightning or blown down by strong winds—DDS be multiplied by grafting.

Fortunately, there are low-lying branches of the tree that are very healthy, which could be the source of scions for grafting. In our own estimate, a good propagator could graft no less than 500 seedlings in one year.

What to Do Next

The grafted seedlings should be given special care. They should be placed in a netted nursery where they will receive the right amount of sunlight and also given the right potting medium and the right attention. The next agenda would be to create a scion grove to ensure that DDS will never perish and become extinct. It can be around forever. I will plant at least 100 grafted trees that will serve as the source of propagating materials.

In Lanao, we saw a lot of coconut plantations with old coconut trees that are planted about 10 to 12 meters apart. One hectare could be planted to 100 trees for the production of fruits and scions.

With adequate fertilization and watering, the grafted trees could start bearing fruit in five to six years. The other grafted trees can be sold to interested growers. Or they could be planted in other Dimaporo farms.

Grafting should be continued year after year, getting the scion from the mother tree. The idea is not to make the DDS exclusive to the Dimaporo family. More people from Lanao del Norte and beyond should be encouraged to plant DDS in commercial farms and in home lots. The idea is to share the good things with other people. And that will endear
the Dimaporo name to durian-loving people.

The target could be to produce big volumes of fruits later on for sale to other places in the Philippines and for overseas markets such as Hong Kong, Singapore and Taiwan. Fresh fruits as well as processed, vacuum-packed, and frozen ones can be exported.

The DDS could become a byword and the Dimaporo name well-loved by the durian-loving community. The original tree could become an agritourism destination. It could become a national treasure that will be conserved and maintained.

During the durian season, special guests from Manila and elsewhere could be invited to experience tasting the special durian. This could be a well-publicized event to further spread the good news about DDS. It could be featured in social media, print, radio, and television. I will be the first to publicize it in my blog and in my writings in the daily newspaper and the vernacular magazines.

The 36-hectare farm was developed by the late Congressman Ali Dimaporo, the grand old man of the reigning Dimaporo political clan in Lanao del Norte. Raul Maghilom relates that the late political kingpin Ali loved to collect durian varieties during his travels abroad. And one of them was the DDS, which is doing very well despite the apparent lack of attention and care. Many of the other durian trees in the farm are suffering from die-back disease. But not DDS.

There is still time to make DDS a commercially viable variety and a tourist attraction in Lanao del Norte. This can be possible by planting more DDS propagations and giving them the special care they deserve.