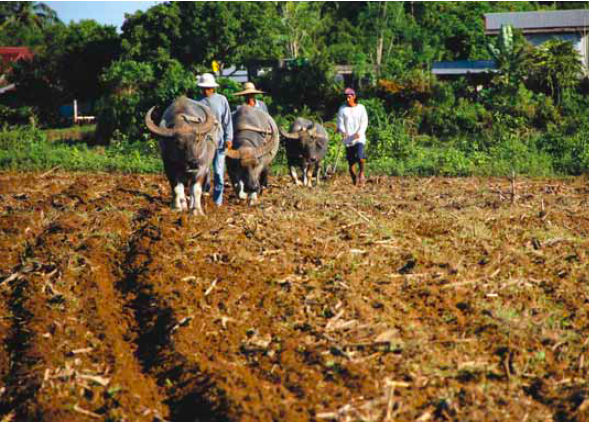 The Philippine Carabao Center (PCC) is boosting the features of the “Palayamanan Plus Nuestra” project of the Philippine Rice Research Institute (PhilRice) with the addition of the raising of dairy carabaos as another source of income for farmers adopting the project.

‘Palayamanan’, a combination of the terms ‘palayan’ (rice farm) and ‘yamanan’ (gold mine), suggests that a rice farm can be a gold mine. It is a fitting name for a project that revolves around the concept of intensive and integrated farming in which every inch of space on the farm is utilized for production of various crops and livestock.

“The ‘Nuestra’, on the other hand, is a model that will serve as a service provider for technologies, capacity enhancement activities, custom services, enterprise development, financing, and market access to the smallholder farmers,” said Rizal G. Corales, program leader.

He added that “Nuestra” stands for “Nucleus Estate Strategy” and that it is now being fully developed in an area within the PhilRice station in the Science City of Muñoz in Nueva Ecija.

Diversification, he explained, means diversifying farm inputs to diversify production and income. It includes other crops such as corn and peanuts, and raising livestock, particularly goats—and now it includes carabao raising. Intensification, on the other hand, means increasing the cropping intensity over space and over time. “It means maximizing the use of land to plant additional crops, forages, or roughages in between harvest seasons, [when] most farmers’ land [is] underutilized.”

“Integration means all the [components]—crops or commodities that will be established on the farm—should complement each other, such that it will be…beneficial to the [both the] farmer and to the environment.”

“Last October 2014…[through] a memorandum of agreement (MOA), signed by PCC acting executive director Dr. Arnel N. Del Barrio and then PhilRice executive director Dr. Eufemio Rasco, both parties agreed to help each other in the project. PCC is in charge of providing the livestock (dairy buffalo) component and relevant support for the envisaged Palayamanan Plus Nuestra project,” Corales said.

Under the MOA, PCC is to allocate five to ten head of dairy buffaloes as an added component to the project. “Though our project is still under experimentation, we initially implemented it in Bulacan, Pampanga, and Aurora. This year, we are planning to open and implement it in Nueva Ecija, Pampanga, Pangasinan and Isabela,” Corales said.

They are still requesting assistance from PCC for advice on where to locate the project that will enlist dairy carabao farmers in Nueva Ecija. He said that Dr. Del Barrio suggested to them to implement the project close to PCC’s established dairy buffalo farmers since most of those individuals are knowledgeable about the task at hand and are already capable of managing buffaloes.

Dr. Del Barrio said his agency is 100 percent committed to providing assistance and collaborating with the PCC to contribute to the success of the project, adding that carabao raising can contribute to a farmer’s income through the sale of the animal’s milk, meat, and manure.

“If a particular farmer [is] given five dairy carabaos and three of them will lactate at the same time, he will be harvesting at least 15 liters of milk every day in a 305-[day] lactation period. This means that [farmers] will be earning at least Php225,000 as additional income from [their farms].”

“The selling of male calves and the [vermicompost] (decomposing matter from manure used for plant fertilization) that will be produced are additional sources of income [from] the raising of the carabaos alone,” he added.

Corales said that this “Palayaman plus Nuestra” project is poised to be a national program because of its possible impacts. Aside from the main objective of increasing farmers’ income, the project can also help boost agribusiness in a particular community; increase production inputs, create a positive impact on the environment, and give farmers sufficient and nutritious food.

“[Currently] we’re also collaborating with other agencies and private entities such as the Philippine Center for Postharvest Development and Mechanization (PhilMech), National Irrigation Administration (NIA), Agricultural Training Institute (ATI), [and the] National Dairy Authority (NDA), among others…We believe that these collaborations are our key [to] attaining success to this project,” Corales said.