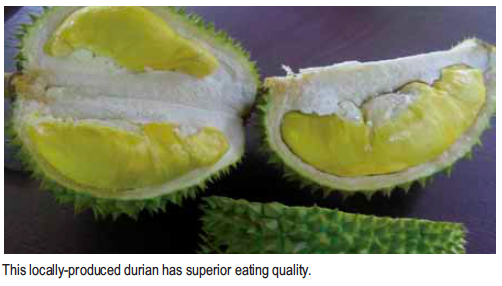 Exotic fruits could be a potential moneymaking niche for interested farmers.

The Philippines is a small producer of exotic fruits that include durian, Longkong lanzones, pummelo, and mangosteen compared to Thailand, Malaysia, and Indonesia.

However, that did not deter a local fruit expert from aiming at capturing a share of the exotic fruit market in the ASEAN Economic Community (AEC). The fellow is Dr. Pablito P. Pamplona, a retired fruit expert from the University of Southern Mindanao who is now devoting his full time to nursery operations as well as commercial production of exotic fruits, rubber, and oil palm.

He recently went to Thailand and Malaysia as an initial step in observing the nature of the exotic fruits market in the ASEAN.

One of the things he wants to find out is the season or seasons that produce the exotic fruits. As of now, major exotic fruit producers are Thailand, Malaysia, Vietnam, and Indonesia. Why the need to know the seasons when the different countries produce their exotic fruits? Well, so that growers in the Philippines can time the fruiting of their trees through cultural management and other strategies. The purpose is to produce the supply when no other country is doing so.

It is well known that the fruit trees bear fruit at different times in different countries due to climatic differences. Usually, fruit trees can be induced to bear flowers by subjecting them to drought conditions for a month or two and then adequately irrigating them. Of course, the trees have to be adequately nourished with balanced fertilizers. Drip irrigation can also help in producing bountiful fruits.

Dr. Pamplona believes that the Philippines can produce Longkong, pummelo, durian, and mangosteen for export to the AEC. What is needed is to expand the area to be planted to these crops. Longkong, a variety from Thailand, has been proven to have adapted to local conditions. In fact, if Longkong can be produced in big volumes, the local market is also a good market. And this should motivate farm owners to plant more Longkong.

Pummelo is another very possible export to the AEC. The Magallanes variety can be at par with or even better than the best varieties from Thailand and China. What is important is to increase production and maintain high quality through the use of the right fertilizers and protection from pests and diseases.

Dr. Pamplona is really serious in pursuing his dream of promoting exotic fruits from the Philippines to the foreign market. In fact, he is now preparing a paper on the opportunities to expand production of pummelo and Longkong in the country.

Aside from Magallanes pummelo, there are other varieties that can be produced in the Philippines.

One is the Milo Mas, which Dr. Pamplona introduced earlier from Malaysia. The young fruits have fine hairs which discourage insect infestation. It is also claimed to be non-site-specific, meaning it can perform well in many places in the Philippines. Another variety that he is excited about is the Nam Roi from Vietnam, a white-fleshed variety that is
Vietnam’s major variety. As per his experience, Nam Roi does very well in his own farm. And that is why he is developing another three hectares to this variety.

Durian is another exotic fruit that can be produced in the Philippines. What is important is to produce a few well-selected varieties in big volume. This will simplify exporting. Exporting one variety with very good quality is much simpler than exporting many fruits of various traits.

Mangosteen can also be produced for the export market. The fruits are not only prized for their superb taste; they and other parts of the tree are said to have medicinal attributes.

The government can do a lot to support the industry. This could be in terms of policies that will encourage farmers to go into exotic fruit production. The government should also undertake initiatives to promote the Philippine exotic fruits in the foreign market. It could help set up postharvest facilities that will ensure high quality of the fruits for the local and foreign markets.

The Prospects of Producing Mangosteen Juice in the Country