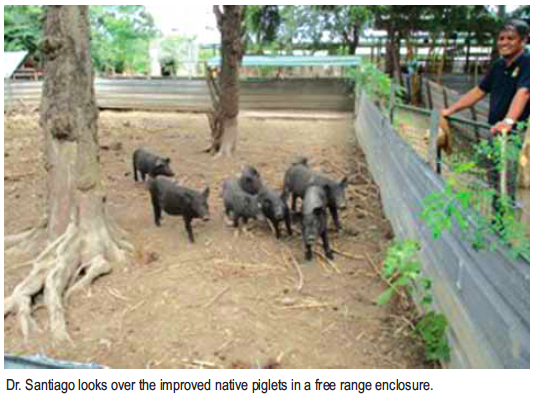 Who knew that making money could be good for the environment as well?

The native pigs in the Philippines originated from the four endemic wild species (“baboy damo”) in Luzon, Negros Island, Palawan, and Mindanao that have become domesticated. They are characterized to be black in color with small ears and eyes, and with an elongated snout.

The males have tusks projecting upward, reminiscent of their wildness.

Native pigs are literal “piggy banks” commonly raised in backyards by thousands of small farmers throughout the country as an additional source of income.

Compared to imported pig breeds, native pigs are easier and cheaper to raise because they are well-adapted to local conditions and do not require expensive housing and care. They are only fed with organic materials available in the household or farm like food wastes, vegetable scraps and plant leaves. There is also a growing market for native pigs in Metro Manila and other big cities for ‘lechon’, a favorite delicacy among Filipinos that is served during feasts and other special occasions because of its special taste and the crispiness of the roasted skins.

A project to improve the growth and breeding performance of native pigs was started in the late 1990s by the Department of Agriculture’s National Swine and Poultry Research and Development Center (NSPRDC) of the Bureau of Animal Industry (BAI) in Tiaong, Quezon. The so-called BAI-Training black pigs or BT blacks for short were developed by the NSPRDC through the selective breeding of native pigs from Benguet, Marinduque, and Quezon.

The BT blacks grow faster than their parents and have an average litter size of 8 piglets that weigh 0.75 kilos each at birth. The piglets mature at 4-5 months of age and can weigh 60 kilos each after 6-8 months. A mature female pig (sow) can breed two times in 14 months. The improved native pigs have been disseminated to farmers in Quezon who also have been trained at the NSPRDC to raise them.

During our recent visit to the NSPRDC, Dr. Rene Santiago, the center’s chief, guided us on a tour of their native pig improvement project. The sows and their nursing piglets were confined in covered 2 x 2-meter pens that had beddings of rice hulls and soil instead of concrete floors used in commercial farms of the foreign breeds. Weaned piglets were reared free range in outdoor enclosures. Feeding was with formulated diets consisting of rice bran, ground corn, copra meal, molasses, salt, and lime supplemented with fresh leaves of “madre de agua” (Trichantera gigantea), an introduced South American acanthus shrub being grown extensively in the facility.

What surprised us about the pig rearing methods of the center was the absence of the foul smell that usually emanates from conventional pig farms that use pens with concrete floors. The bedding of the native pigs’ pen consisted of a 70-centimeter layer of rice hull topped with a 30-centimeter layer of soil and rice hull. “The urine of the pigs is absorbed by the bedding and fermented by microorganisms in the soil, thus eliminating the smell of ammonia and other odorous gases,” explains Dr. Santiago. The solid wastes of the pigs are manually collected daily and used for biogas generation or composted.

Another advantage in the rearing of native pigs the natural way is that there is no need for washing the pens. “We used 16 liters of water to clean a pen every day before,” Dr. Santiago said. Moreover, the pigs in the free-range enclosures are much leaner than those in pens because of the exercise they get.

For disease prevention, only anti-hog cholera vaccines are administered to the native pigs, according to Dr. Santiago, who is a veterinarian. Herbal therapeutics like boiled leaves of “lagundi” for colds and coughs, and star apple leaves for diarrhea, are also used.

In the National Swine Project of the University of the Philippines Los Baños, supported by the Department of Agriculture’s Bureau of Agricultural Research, 45 farmers in the municipalities of Malanay and San Narciso in the Bondoc Peninsula of Quezon were given the improved breed of native pigs for rearing as their additional source of income.

Each farmer was given two ready-to-breed gilts (females) and seven weanlings (piglets) to raise. The pigs were kept in simple sheds under the coconut trees in open areas that were fenced with bamboo and “madre de agua.” Feeding was mainly with boiled taro tubers and leaves, rice and corn bran, mature coconut meat, cassava and madre de agua leaves.

With an initial investment of Php15,000 for the pigs and feeds per farmer, and an annual gross income of Php30,304 from the sale of 10 head of market-size pigs weighing 25 kilos each at Php780/head and 24 piglets at Php937/head, the farmers who earned only Php5,000-Php6,000 per year prior to raising native pigs are now each earning an additional annual income of Php5,304.

For more information on the raising of the improved breed of native pigs, interested readers can email Dr. Rene Santiago at renesantiago@yahoo.com

Food waste for Pigs Could Save Threatened Forests and Savannahs