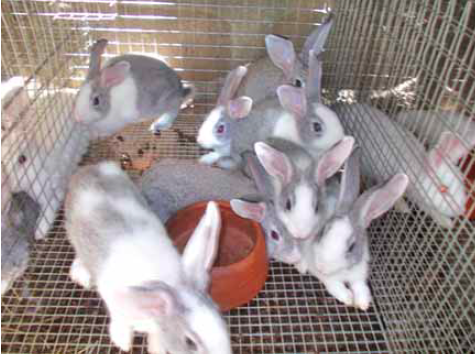 A healthy and shiny coat, good and quick feed intake, bright eyes without any discharge, good body weight gain, and a very active disposition are the physical indications of a healthy rabbit.

The seminar was organized by Mark Arman D. Aquino, group leader of the senior clinicians with the approval of CLSUCVSM faculty member Dr. Mann Cyron E. Sarmiento. Aquino, already a rabbit raiser, wished to share the benefits of raising rabbits with fellow VMed students, noting that rabbits are not sufficiently incorporated in the current veterinary curriculum, being only a part of a one unit subject grouped with quails and other fowls.

CLSU is the Philippines’ world class National University for science and technology in agriculture and allied fields. Their Doctor of Veterinary Medicine (DVM) course is a six-year degree program consisting of a two-year preparatory (pre-vet) period and a four-year proper curriculum.

The program provides theoretical knowledge and practical experience in animal production and diagnosis, as well as in the prevention, treatment and control of clinical disorders and diseases in pets and farm animals as well as wild and zoo animals Veneracion was invited to give the seminar under the subject VMed 398 for senior students of the College of Veterinary Science and Medicine. Under VMed 398, resource speakers on various veterinary subjects are invited to update the students on current practices in particular fields outside the academe.

Rabbit farming or raising rabbits for meat is still mostly unfamiliar, and only a few of the seminar attendees had tasted rabbit meat through dishes cooked by “Kuya” Mark; those who had, however, said they liked it. The students were more familiar with rabbits as pets. Aquino cited his mother as an example of the many Filipinos who are not yet sold on the idea of eating rabbit meat. He believes they need more exposure to the idea and information on the health benefits of eating rabbit meat.

Veneracion highlighted how rabbit farming is foreseen to be the next sunshine industry, considering that more people are taking note of the benefits of raising rabbits. He said that raising rabbits requires only a small space which may be located in an urban or rural area.

The venture requires only a small amount of capital to put up, and the rabbits do not compete with humans for food; they can be raised on just grass and vegetable scraps. The operations of a rabbitry are also very clean and quiet; it is now considered healthy to raise rabbits, plus close to 90% of the rabbit is usable by man. Even rabbit manure is very useful; it is considered black gold fertilizer by organic farmers.

The students’ concerns were mostly about butchery procedures and animal welfare. It was noted that present practices and knowledge about rabbitry were mostly drawn from the Internet, and the facts and figures are taken from practices abroad.

Before Veneracion began conducting his seminars on rabbit farming, no seminars were being conducted on the topic when he started his rabbitry; thus, he relied heavily on doing his own reading and research. He has taken it upon himself to conduct rabbit farming seminars to benefit those who will venture into the industry.

His lectures are drawn from the knowledge he has accumulated and verified through practice at Aven Nature’s Farm. Best of all, he is sharing the recording systems he has developed—an important aspect of rabbit raising. With these, costly mistakes can be avoided, if not eliminated, and more people will be encouraged to venture into rabbit farming.

Art appreciates the fact that the CLSU VetMed students are now showing an interest to rabbit farming. Their training will be of great use in establishing standards and practices that are painfully lacking in the industry at present.